Sullivan-González Passes Baton to Next Generation of Leaders 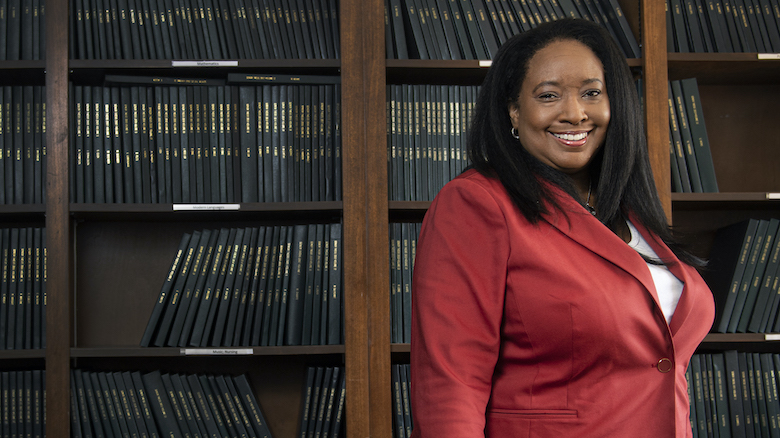 Ethel Scurlock is taking over as interim dean of the Sally McDonnell Barksdale Honors College at the University of Mississippi, where she also is director of African American studies and an associate professor of English. Photo by Logan Kirkland/ Ole Miss Digital Imaging Services

Douglass Sullivan-González is almost as excited to return to the classroom as he is to see the next generation of leaders at the University of Mississippi‘s Sally McDonnell Barksdale Honors College put their stamp on the prestigious program he’s spent two decades growing.

As he leaves his long-held position as dean of the Honors College to focus full time on teaching and research in the Arch Darlymple III Department of History, Ethel Scurlock will assume the role of interim dean.

Sullivan-González’s last day will be Aug. 17, but Scurlock said the leadership transition won’t be as abrupt as it could be because he has been empowering leaders in and around the Honors College for years. She will begin assuming many of the dean’s responsibilities this month.

“DSG has been a wonderful resource during our leadership transition,” Scurlock said. “We have met about established procedures, discussed a few areas that are ripe for change.

“We both want to empower the HOCO leadership team to continue serving our students with integrity, energy, and excellence. I am fortunate to have the opportunity to carry forward DSG’s excellent vision for the program.”

Returning to His Passion

After 18 years as dean of the Sally McDonnell Barksdale Honors College, Douglass Sullivan-González is stepping down to return to full-time teaching and research in the Arch Darlymple III Department of History. Photo by Thomas Graning/Ole Miss Digital Imaging Services

Sullivan-González continued teaching, researching and publishing as dean. But as the program continued to grow, the amount of time he had to spend on administrative responsibilities forced his course load to shrink.

He hopes to spend the next few years pursuing those passions with all his effort.

“I turned 65 this year and I’ve got at least two books, potentially three, in me that I want to get out,” Sullivan-González said. “When I started, we had 375 students, basically, so I could still teach and administer, but we’re at 1,700 now, and administration takes 100% of my time.

“Teaching both undergraduate and graduate students is what I enjoy, but I’ve been unable to advance my teaching and research because of the success of the honors college.”

In the 18 years Sullivan-González served as dean, he worked with four different chancellors to raise more than $30 million in private funding for the Honors College, completed a $6.6 million addition to its building and more than quadrupled the number of students in the program.

Sullivan-González came to Ole Miss as an assistant professor in 1993 and was named the College of Liberal Arts Outstanding Teacher of the Year in 2001. He is the author of two books on the intersection of religion, politics and identity in Guatemala: “The Black Christ of Esquipulas: Religion and Identity in Guatemala” (2016) and “Piety, Power, and Politics: Religion and Nation Formation in Guatemala, 1821-1871” (1998).

“DSG has done so much to strengthen and advance our Honors College during in his time as dean,” said Lee Cohen, dean of the College of Liberal Arts. “I am certain that he will bring that energy and passion to his teaching and scholarship, which will inspire and motivate our students.

“I also know he is working on a project about Central America and has plans to use that research to publish his third book. As an academic administrator, it is difficult to find the time to focus on your own scholarly interests, and I am delighted that DSG will now have the opportunity to pursue his interests as a scholar after serving our university as dean for nearly two decades.”

Scurlock wants to continue Sullivan-González’s legacy by making an Honors College education accessible to every student in the state. She is passionate about giving every Mississippian the information and resources they need to reach their highest and potential, and her work on the Honors College admission committee is proof of that passion.

“I’m not approaching this as a job to fill his shoes,” Scurlock said. “I’m thinking of ways we can we keep that legacy alive and make honors education at UM more accessible and engaging for our 21st century students. We are happy that we attract a national student body, but want to make sure that all our Mississippi students better understand how they benefit from studying with us.

“I believe this focus will help us honor the gifts of the Barksdale family and their deep passion for all Mississippians. We will continue to bring high-performing students from all over the world, but we want to pay special attention to how the environment offered at the Honors College can help move Mississippians forward academically, socially and professionally. ”

As a member of the Honors College admissions committee since 2015, Scurlock has helped to ease the college’s application process while shaping the vetting process to ensure the greatest number of students have an opportunity to be considered for a position in the prestigious program.

“I want to make sure every single student has a fair chance,” Scurlock said. “I’m interested in finding the high-performing students who are committed to the public good, and who use intellectual knowledge to make things better in their communities.”

Scurlock joined the UM faculty in 1996 and has served as director of African American studies, a senior fellow for Luckyday Residential College and associate professor of English while serving on a number of committees across campus. She was named the College of Liberal Arts Outstanding Teacher of the Year and UM Humanities Teacher of the Year in 2003 and the Elsie M. Hood Outstanding Teacher Award in 2011.

“I have had the very good fortune of working with Dr. Scurlock,” Cohen said. “She is such a dynamic educator who cares deeply about access to higher education and the success of all our students.

“She has done an absolutely incredible job as director of our African American studies program, nearly doubling the number of majors. She also brings an executive presence where she commands a room and people stop and listen when she speaks.”

Scurlock has taught and served in the Honors College for 16 years. Sullivan-González said her impact on the program has been, and will continue to be, notable.

“Dr. Scurlock’s vision, energy and joy will make an immediate mark on the Honors College family,” he said. “She is the right person at the right moment.”