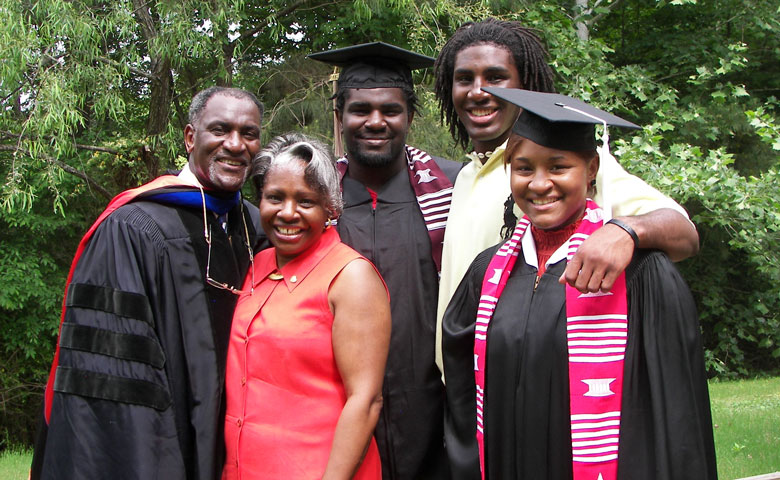 Both Dr. Donald Cole and his wife Marcia earned multiple degrees, held leadership roles, and taught at the University of Mississippi. Their children Donald II, William, and Mariah all attended UM.

The Donald Cole Catalyst for Change Scholarship Endowment exceeded its goal by almost $10,000 through an online University of Mississippi fundraising campaign attracting gifts of all sizes.

The Ignite Ole Miss campaign, spearheaded by Ethel Young-Scurlock, director of the African American Studies program, associate professor of English, and senior fellow  of the Luckyday Residential College at UM, raised more than $43,000 in two months. The endowment will fund scholarships for African American Studies majors who exhibit leadership qualities, a spirit of service and academic excellence.

Scurlock credited the campaign’s quick success to the deep love she said alumni, students and current and former faculty and staff feel for Cole, whose history of service and leadership at UM spans 50 years. Cole was a student activist in the 1970s, a doctoral student in the 1980s, and a professor and top administrator from the 1990s through his retirement in January 2019. In that time, he influenced generations of students and faculty.

This fall, Cole was inducted into the Ole Miss Alumni Hall of Fame for his accomplishments and contributions to UM.

“So many students have been impacted by Dr. Cole’s leadership and wisdom,” said Senora Miller-Logan, the assistant director of the Luckyday Residential Scholars program at UM and one of the campaign leaders. “It is wonderful to see that many more students will be able to benefit from his legacy because of the generous contributions to the Don Cole Catalyst for Change Scholarship.”

Torie Marion, UM’s assistant director of Alumni Affairs who also served as one the campaign’s leaders, said she was one of those students who Cole inspired, starting when she was a young teen.

“I met Dr. Cole as a sophomore in high school in the summer of 1994 in Weatherford, Oklahoma, for a math and science camp,” Marion said. “It was meeting him, hearing his story and seeing his love for Ole Miss that made me decide to attend our beloved university. He is amazing and such an inspiration to so many students, faculty and staff before and after me.”

“Together, we have made history,” Scurlock said. “This fund is going to transform the lives of students, who will then go on to transform the state of Mississippi and bring about positive change. An endowed scholarship guarantees that we will be able to help student leaders and memorialize the work of Dr. Don Cole at UM, long after we are all gone.”

Although the Ignite Ole Miss online campaign has concluded, those individuals and organizations that wish to contribute to the scholarship in Cole’s honor may still do so through the UM Foundation. Visit https://umfoundation.com/ignite and select the Don Cole Catalyst for Change Scholarship from the drop-down menu.

You may also contact Angela Atkins, digital giving officer in University Development, at 662-915-2755 or adm1@olemiss.edu.