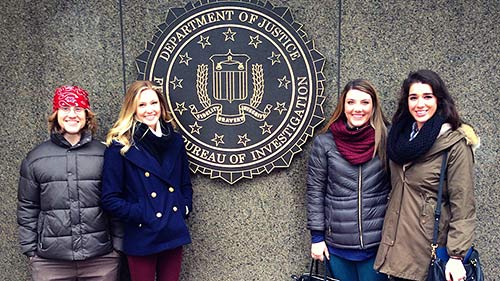 Most University of Mississippi faculty members will say that “seeing a light bulb go on” when a student truly connects with the subject matter is one of the most rewarding parts of their profession. It is that passion for sharing knowledge and creative ideas that is driving many UM faculty members to create learning experiences that go outside the four walls of a classroom.

In its seventh year, the university Study USA program is assisting faculty members as they work to put students in direct contact with research and experts who hold firsthand experience in a variety of subjects.

“The knowledge and practical applications that my students learn in two weeks is more than I could ever teach them in a classroom for a whole semester,” said Neil Manson, UM assistant professor of philosophy, about his Study USA Environmental Ethics course. “Through this program, my students have the opportunity to see how these environmental policy issues are playing out each and every day in real-life situations. The opportunity to meet these key players in D.C. is just an invaluable learning experience.”

During the upcoming Wintersession break in January 2016, students in various disciplines can take advantage of opportunities to immerse themselves in academic courses during one or two-week excursions. Hospitality management in Las Vegas, a civil rights road trip around the Southeast and journalism in New Orleans are just a few of the classes scheduled for Wintersession 2016.

Manson taught Philosophy 345: Environmental Ethics, which deals with the human relationship with the environment, during the 2012 and 2015 Wintersession terms.

Students spent the first week on the Oxford campus. During this time, Thomas Moorman, Southern region director for Ducks Unlimited, spoke to the class about the mission of the organization that serves as the United States’ largest wetlands conservation group. Students also toured the UM wastewater treatment facility and heard about the environmental work that plant supervisor David Adkisson is engaged in.

The next week, the class traveled to Washington, D.C., to meet with legislators, activist groups and other officials involved in U.S. environmental issues, including U.S. Sen. Thad Cochran, who chairs the Senate agricultural committee.

“Senior staff members of the Senate Agriculture Committee, and well as members of Senator Cochran’s staff gave us insight on how the U.S. farm bill is crafted each year and discussed the Keystone and XL pipelines,” Manson recalled. “These are important environmental decisions that our government is debating right now, and they will have a major impact on the next generation of Americans.”

Students also visited BIO, the biotechnology industry organization, to learn more about the controversies surrounding genetically modified foods and how they might affect the food supply in the future. They also visited with officials from People for the Ethical Treatment of Animals to discuss both sides of the animal rights and food supply issues.

For the fourth time in as many years, Manson will lead a group of students to Washington during UM’s Wintersession 2016 term, this time for his class in medical ethics.

“If I had not taken this course, I would never have become as interested in medical ethical issues that are on the forefront of health care legislation right now,” said Hannah Hudson, a May 2015 UM graduate.

Hudson participated in the Study USA Biomedical Ethics course during Wintersession 2014 and is now pursuing a master’s degree in bioethics at Emory University.

“The Study USA course I participated in has opened so many doors for my future,” said Jenna Campbell, a junior political science major from Palatine, Illinois. “I’ve learned how crucial learning outside the classroom can be.”

“Dr. Manson’s courses have been such eye-openers for students,” Antonow said. “Ethics exist in real life. It’s not just something that was discussed in ancient Greece. These discussions and policy decisions based on these issues are happening now in Washington, and this Study USA course helps students to see how this affects all of us.”