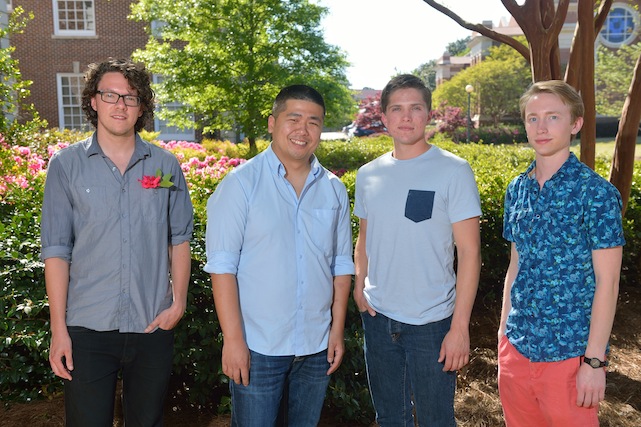 The awards given were the Evans Harrington Scholarship for a freshman or sophomore, two Ella Somerville Awards for juniors and seniors, and two Bondurant prizes for graduate students.

McCrory had entered the competition in 2013 but had not placed. He said that this encouraged him to build a more polished portfolio. Blair Hobbs, chairman of the Creative Writing Awards committee and judge for the Evans Harrington Scholarship, said McCrory’s short story, No-Bake, “demonstrated a firm control of syntax and fresh diction, and his story was very impressive … His short story was just fantastic, and his middle-aged-divorced-alcoholic- bakery-owner woman protagonist was completely believable.”

One of the two awards given to two recipients is the Ella Somerville Award, which is given to one fiction writer and one poet. The Somerville awards were judged by Meagan Poland, adjunct instructor in the Center for Writing and Rhetoric, and English instructor Melissa Ginsburg.

The Ella Somerville Award for fiction was given to Mary Marge Locker for her short story, Lolei. In Lolei,”the central character is a young man who travels to Cambodia to work in orphanages “mainly to feel better about himself and make the world a better place,” but, according to Locker, “some pretty dark and horrible things happen to him instead.”

Robby Caldwell won the Ella Somerville Award for poetry with his poem, Road to Zion. He says the award “was really just a huge confidence booster. It’s really encouraged me to keep building a better portfolio and entering other contests.”

The Bondurant Prize, the other award that is given to two students, is also the only award not open to all students. This award is exclusive to graduate students pursuing degrees through the UM English Department. Its two recipients were determined by Sean Ennis, instructor in the Center for Writing and Rhetoric, and James Everrett.

David Tran, recipient of the Bondurant Prize for creative writing, describes his winning short story, Hello, I am Hung, as featuring a young telemarketer who copes with his grief over the death of his sister with the help of a similarly grief-stricken caller.

“He gets fired in the end,” Tran added.

Earlier in the month, Tran won the Elvis vs. Einstein award for flash fiction written by graduate students.

The winner of the Bondurant Prize for poetry, Jonny Veach, commented glibly on the financially rewarding aspect of the win.

“I feel this award will benefit me in the future by helping me pay my bills for this month,” he said.

He summarizes his poem, Clay Figurine, as being mainly about “rivers, women and river women” and “an attempt to aesthetically represent the spirit of Hotty Toddy.”

A sentiment shared by many of the winners is that the awards were more meaningful having come from the UM English Department in particular.

“Having my writing recognized by the English Department has given me a sense of validation that this is where I need to be to continue defining myself as a writer,” McCrory said.

Locker agreed, saying, “It’s an honor to win anything among an English Department as big and diverse and gratifying as Ole Miss’ department.”

The winners also said they felt that the time and effort they had put into their submissions had truly paid off.

“(My submissions) were ones I’ve been working on for the past few months,” Caldwell said. “They’ve been with me for a while — since last semester.”

In terms of the blood, sweat and tears he put into his submission, Veach said: “I bled on it some … I’m incapable of writing anything without crying, so you better believe that I put a lot of tears into it too.”

The annual creative writing competition is open to students of all majors and classifications. Its commencement is announced via email and posters in the spring, and all interested parties are encouraged to send in their submissions. Each entrant is considered for the award suited to his or her classification, and submissions are reviewed by a single judge for each specific award.

More about the winners of the University of Mississippi Department of English 2014 Creative Writing Contest:

Evans Harrington Scholarship: Charles McCrory for his short story, No-Bake
Charles McCrory is a sophomore majoring in English and minoring in Gender Studies. He was a 2012 National YoungArts Foundation Silver Award winner for Writing and a U.S. Presidential Scholar in the Arts semifinalist. His writing is featured or forthcoming in Gargoyle Magazine, plain china, The Cossack Review, The Coachella Review and SOFTBLOW, among other journals. He reads fiction submissions for The Adroit Journal.

Ella Somerville Award: Mary Marge Locker for her short story, Loelie
Mary Marge Locker is a junior English major and Environmental Studies minor from Florence, Alabama. She has written for McSweeney’s Internet Tendency, American Circus, Hyperallergic, and The Oxford American, and has been nominated for a Pushcart Prize.

Ella Somerville Award: Robby Caldwell for his poem, Road to Zion
Robby Caldwell is a senior from Cleveland, Tennessee finishing up a B.A. in Biology with minors in English and Chemistry.  I’m a third generation Rebel, and I live here with my wife, Meghan, and our dog.  I start medical school this summer in Tennessee, but we’re all sad to leave Oxford.  I spend as much time as I can outside; I enjoy whitewater kayaking, mountain biking, and sitting on the porch at Square Books.

Bondurant Prize: David Tran for his story, Hello, I Am Hung