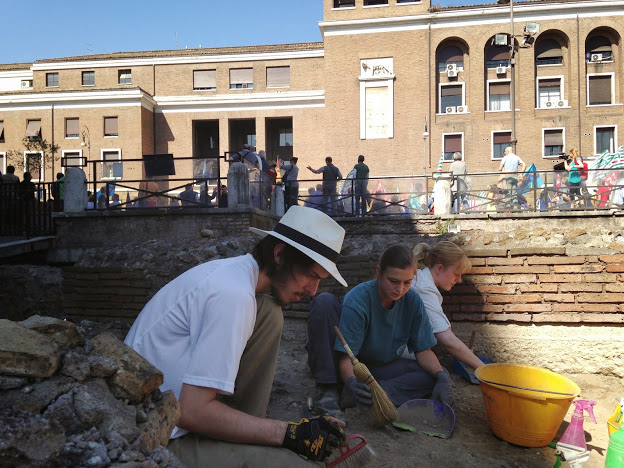 A group of seven University of Mississippi students recently took the educational trip of a lifetime—five weeks in Rome learning in one of the world’s oldest cities and working on an archaeological dig at a site that dates back to about 600 B.C.

Hilary Becker, assistant professor of classics, took the students to the Area Sacra di S. Omobono archaeological field school, which was organized by the University of Michigan and also the University of Calabria in Italy, under the aegis of the Sovraintendenza ai Beni Culturali di Roma Capitale. During the five week program UM students were introduced to the methods of field archaeology, including excavation techniques, artifact processing and the latest in documentation technology, including three-dimensional modeling.

“I’m very proud of their contributions,” Becker said. “It’s a testament to their abilities that they arrived with basically no knowledge of field archaeology, but during the program they developed the skills and experience that allowed them to understand all the different facets of work at an archaeological excavation and also how to handle the different jobs. Sometimes, it’s hard to learn these skills out of a textbook, but being on site allows students to make lasting connections between the technique and the materials.”

The students dug near the Roman Forum and Capitoline Hill. The excavation site, which dates back to 600 B.C., was used as a Roman sanctuary that remained in use for more than 800 years. It was eventually transformed into Christian churches, the latest of which still stands. Since the site has been active for such a long time, there is a rich accumulation of artifacts and remains of many building phases. As a result, excavators have to dig to a depth of about 21 feet to reach some of the earliest materials.

“To able to see remains of the 6th century B.C. in Rome is difficult because the city is a continually occupied place,” Becker said. “Millions of people still live there and one cannot simply destroy what’s on top in order to see what lies beneath. There are only a few areas where archaeologists have been able to go that deep. We were extremely lucky to be working there.”

Molly Pasco-Pranger, associate professor and chair of classics, who also brought six students to Rome for a 10-day course earlier this summer, said this is the first year the UM classics department has had any faculty-led trips abroad.

“We can give them a very strong foundation in the languages and in the history and the art and archaeology here on campus, but both getting to the site in Rome and seeing its topography and the remains in person is incredibly valuable,” she said. “Learning the theory of archaeology is one thing, but getting the dirt under your fingernails is another.”

Several students received financial support for their trip from the Mike and Mary McDonnell Endowment in Classics. They kept an Internet blog of their trip that chronicled their work in words and photos.

Laura Dona, a sophomore anthropology and classics major from Monroe, La., said being there was like “being able to reach behind the glass in a museum.”

“We were able to learn hands-on how archaeology is performed alongside amazing teachers,” Dona said. “It was an irreplaceable experience that taught me more in 5 weeks than I have learned in years.”

Zack Lawrence, a junior classics major from Tupelo, said “S. Omobono taught me to understand what lies just below our feet and to probe what evidence there is in search for context, and I brought away a willingness to explore the unknown and to be unafraid to explore new ideas in search of answers.”

Juliana Norton, a junior classics and linguistics major from Tupelo, said she learned more about the different parts of archaeology like stratigraphy, zooarchaeology, topography, bioarchaeology, surveying and other skills. But the trips around Rome to other important excavation sites, as well as museums, were also inspiring.

“Overall, it was an unforgettable experience that I’m very glad I participated in,” Norton said. “Not only did I learn a lot more about archaeology and Roman history than I ever could in a classroom, I was able to get some real experience working in the archaeological field and found out it’s something I would like to continue doing.”

Andersen Marx, a senior history and classics major from Oxford, said “the dig at S. Omobono taught me that one can interpret history not only through primary literary sources, but also through actual physical evidence. After our stint at the excavation I came to realize there is still more archaeological work available in Italy. There are still ruins and artifacts left to discover.”

The professionalism the UM students displayed while working at the site made an impression Mahmoud Samori, an ancient history Ph.D. student at Brown University who was the area supervisor at the field school.

“I realized one morning towards the end of the field school, that I’d felt all for the last hours as if I’d been digging with colleagues instead of students,” Samori said. “The student-teacher dynamic had evaporated leaving only a handful of archaeologists excavating with a deadline. It was a great pleasure to excavate with the team from Ole Miss and I was proud to watch them transform from cautious students into confident archaeologists.”