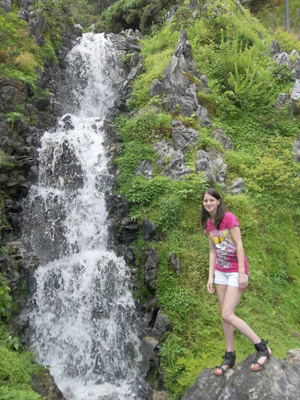 Jean Steinwinder left her home in Wesson June 20 headed for South Korea to study the language and immerse herself in the local culture. On this her first trip outside the South, she plans to spend six months in the Asian country preparing to teach English there following her May graduation from the University of Mississippi.

“I have had a great interest in the Korean culture and language for a few years now, so I felt like I should study abroad in Korea at least once before graduating,” she said. “I plan on teaching English in Korea, so this is the perfect opportunity to get familiar with the country while taking classes for my major.”

She will be enrolled in Korea University’s Summer Intensive Korean Program from late June to late July, after which she plans to do some sightseeing around the country until she begins the fall semester as an exchange student at KU. Throughout her time there, she will be living in KU’s student housing.

Steinwinder completed her associate’s degree at Copiah-Lincoln Community College, with plans to transfer to a senior college close to home; however, she learned about something special at Ole Miss. “I saw that Ole Miss offered a linguistics degree and Korean classes, and I became determined to go there,” she said, adding that she has found even more than she had anticipated, including the study abroad opportunities offered through the UM Study Abroad Office.

To help defray expenses, Steinwinder applied for and was awarded a Gilman Scholarship and a Freeman-ASIA award. The programs provide assistance for U.S. undergraduate students to study in East or Southeast Asia and earn credit toward their academic degrees.

The Department of Modern Languages is committed to developing very high language proficiencies in its students, said Don Dyer, the department’s chair.

“Jean Steinwinder is emblematic of that success,” Dyer said. “This linguistic focus, during a time when many language programs regionally and nationally are being reduced or eliminated, makes our programs somewhat unique in the country.

“I think it’s fair to say that the University of Mississippi has become a special place for language studies, and its reputation as such is spreading. Many students choose to come to UM now looking to achieve high language proficiencies, and with hard work and dedication, they are able to do just that.”

Steinwinder said that besides the academic support she has received, she has realized other benefits through the department.

“During the first semester of Korean classes last fall, our teacher managed to arrange many social events like Korean Fun Time and Korean Language Table, where we could mingle with foreign Korean students. Thanks to those events, I made a lot of friends.

“So, on this trip, I’m looking forward to meeting old and making new Korean friends, and visiting an actual Buddhist temple.”

Her dream career stems from her interest in Japan as early as middle school, but she said that, after a friend introduced her to the Korean culture, a new world opened for her.

“I just fell head over heels for it,” she said. “I think it’s probably because not a lot of people know about South Korea; they think about North Korea and associate it with something bad, at least that’s what I did, so it’s like finding a hidden jewel for me.”

Steinwinder’s determination is being recognized by those who know her well, including Allison Paige Burkette, assistant professor of modern languages.

“Jean is an excellent student and a pleasure to have in class,” Burkette said. “Given her interests and her dedication to Korean, this incredible opportunity will put her many steps closer to achieving her goal of teaching English in Korea.”