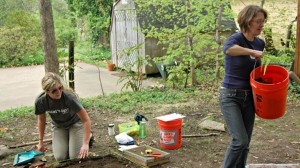 University of Mississippi anthropology students are digging at a historical home in Holly Springs to get a glimpse into the daily habits and foodways of the slaves who lived there from the 1840s until the Civil War.

Two assistant professors of anthropology, Jodi Skipper and Carolyn Freiwald, took their students to dig for artifacts that give clues about life at the Hugh Craft House. The house had slave quarters, with a detached kitchen area, that was built circa 1843. The 1860 Marshall County Slave Census shows nine slaves lived there. About 20 other properties in and around the town also have similar well-preserved slave dwellings.

“Holly Springs probably has more intact slave dwellings in a small area than I’ve probably ever seen in this country,” Skipper said. “This is very unique.”

But identifying those important historical houses isn’t easy to the untrained eye.

“They’re hidden in plain sight,” Skipper said. “They look like sheds, pool houses and lots of other things, but unless you know what you’re looking for, you wouldn’t be able to detect that these were slave dwellings. When I say slave dwellings, they were built for that, but these structures were occupied into the 1930s and 1940s or so by folks working as nannies, or doing other jobs, for the families who owned the properties.”

Freiwald and Skipper have students from a seminar on biological anthropology, a course on ancient foods, a Southern heritage tourism graduate class and a class on African diaspora, among others, working at the site. There’s lots of information about the daily lives of slaves that is revealed through what’s found around the home site, Freiwald said.

“The ground is telling us stories,” Freiwald said. “We just want to tie the pieces of the story together.”

Chelius Carter, an architectural historian and head of the Marshall County Historical Society, owns the Hugh Craft House, which was occupied by Union soldiers during the Civil War. Its heavy timber frame with batten-board siding, is in a well-preserved state and was part of the recent Behind the Big House tour of historical homes in Marshall County. The tour gives local students and the public chances to explore the homes and coincides with the annual Holly Springs Pilgrimage, which is a tour of antebellum mansions there.

The main purpose of the Behind the Big House project is to tell the story of the slave structures and the people who worked and lived in them. The tour has been going on for four years and has been very successful with help from UM student volunteers, Skipper said. 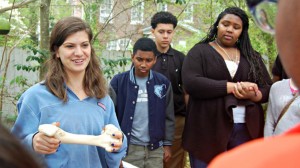 Grace Myers, left, gives a presentation to a school group at a Behind the Big House tour at the Hugh Craft House in Holly Springs.

Grace Myers, a senior anthropology major from Austin, Texas, gave a presentation to each school group attending Behind the Big House about some of the bones that have been found there. Working in Holly Springs has been extremely valuable because the unusually large number of preserved sites from the antebellum years gives students insights they can’t find in most other towns, she said.

“It’s in the backyard of Ole Miss,” Myers said. “It’s cool because Holly Springs wasn’t burned down during the Civil War, whereas Oxford was. So this is a preservation of time. We’re not going to be able to find this in Oxford, but because it’s still part of north Mississippi, we can find out about the habits and the foodways and that kind of information about people who lived in this area. That’s really cool.”

While Holly Springs students walked around and listened to presentations at different spots on the site, UM students dug around and underneath the old slave quarters, looking for bones and ceramics that might have been used for eating.

In the backyard, Stephanie Orsini, an anthropology graduate student from Libertyville, Illinois, dug a small area behind the house. Each house that is excavated seems to have a different makeup of animal bones in the ground around it, she said.

“It’s very different,” Orsini said. “A lot of articles I’ve read say it depends on the nationality of the people in the house. One house that they looked at had people living there who were French. In France, people might consider pig’s head a delicacy, whereas others might not consider that as good of a cut of meat. What the slaves got depended on what people in the big house wanted.”

Freiwald, who is interested in the diets of different groups, said she’s already been able to determine a great deal about what was eaten at the home, but the work there will continue throughout the semester.

“I can tell they were eating sheep,” Freiwald said. “We can tell how they were butchering cows and maybe they were using the bones for soup. I can see they had ribs and some pigs and a number of different domestic animals, and a lot of birds. We’re hoping maybe we can tell at some point if the household ate together. Did they separate their food at all? We don’t know if we’ll be able to answer those questions, but we’ll try to find out.”

Efforts to understand the cuisine there are only part of why the work at the Hugh Craft House is important, Skipper said.

“The dig can tell us about foodways, but it’s also one of the few records that we have of the enslaved community here,” Skipper said. “These are not folks who were writing narratives and leaving them behind. This work is very important for that reason.”

For more information on education and research programs in the UM Department of Sociology and Anthropology, visit https://socanth.olemiss.edu/.