May 31st By Kappy Eastman 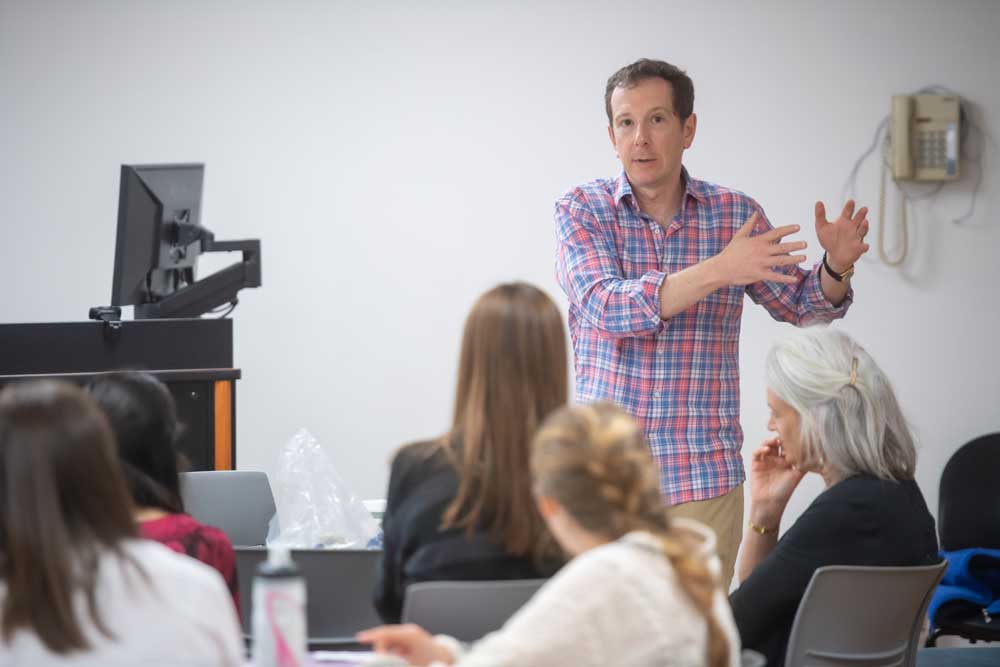 On Wednesday, April 27th, the College of Liberal Arts (CLA) and the Sally McDonnell Barksdale Honors College (SMBHC) hosted a conference bringing together Jackson-area high school students and UM students who spent the past semester studying Jane Austen. The conference was organized by students in Dr. Jason Solinger’s Honors College class, “Reading Jane Austen for Fun,” an experiential learning seminar in which students were tasked with connecting their studies to their extra-academic interests as well as work in other fields. Conference presentations included creative adaptations and applications of Austen’s fiction as well as original scholarly research.

The idea for the student conference was hatched during a conversation between Solinger and Dr. Carolyn Brown, Regional Coordinator of the Mississippi Region of the Jane Austen Society of North America (JASNA). Serendipitously, Brown, an independent scholar and author of literary biographies, was also scheduled to teach an Austen seminar during the spring semester at the Jackson-based St. Andrew’s Episcopal School. “Before the semester started we had been talking about ways to get students involved in JASNA,” said Solinger, whose research focuses on Austen’s legacy in the 20th and 21st centuries. “I wanted students to have opportunities to share their creative or scholarly work with the huge and hugely engaged community of Jane Austen readers, and I wanted to see what would happen if we merged the fan experience with academic work.” Soon the idea evolved from a JASNA sponsored zoom event to a conference that would take place on UM’s campus.

Brown wanted to give her upper-division students a taste of college life. Solinger saw the conference as an opportunity for students to share their projects as well as gain the valuable experiences of planning, designing, and publicizing a university event. “The students did everything,” Solinger said. “They organized the panels, they designed and published the program, and they worked with staff in the CLA, SMBHC, the Office of Admissions and the JD Williams Library to make sure the conference and the college visit came off without a hitch.”

Among the presenters from St. Andrew’s was Advikaa Anand, who gave a talk comparing the writing and lives of Austen and 20th-century Mississippi writer, Eudora Welty. “Marriage was a huge theme in both authors’ work, but both authors themselves never married,” she said. “Marriage, or the lack thereof, shaped each writer’s work in surprisingly similar ways.” UM student Marika Hall showed a short film, starring her classmate Reese Anderson, which was inspired by Austen’s novel, Persuasion, and influenced by the quirky aesthetics of filmmaker Wes Anderson. The film, exploring awkward social encounters, was Hall and Reese’s third collaboration of the semester. “We learned more through experience this semester,” Hall said, “and I think our most recent film was the best.” Other conference highlights include experiments in social media, work in the medical humanities, computer-driven studies of biodiversity in Austen’s novels, artwork made out of pages from Austen’s novels, music, and comic monologues.

After such success, Solinger hopes the conference will become a recurring event. “This was a pilot run that developed somewhat organically, but it’s easy to imagine the conference growing, especially if we partner with local and regional high schools,” he said.

“I thought we learned from each other, and I loved that,” said Brown. “We all share this love of Jane Austen. I think she’s alive and well in the twenty-first century; that’s what I got from the conference. Her stories truly resonate.”

Anand agreed. “What I took away from the conference was how pervasive Jane Austen is. At the end of the day, no matter what we do, we can’t escape her,” she said. “Over two hundred years later, we’re still talking about her writing.”