Student Gets Immersed in Arabic Culture, Language in Morocco 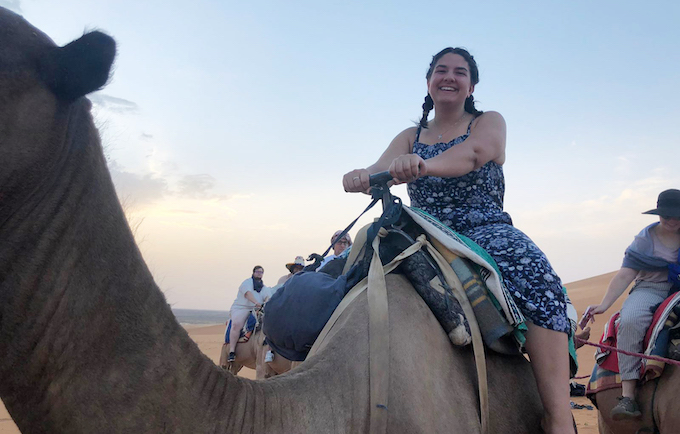 University of Mississippi junior Isabel Spafford rides a camel in Morocco, where she spent her summer on an immersive experience of language and culture studies through the university’s Arabic Language Flagship Program. Submitted photo

Language and culture can be learned from books or in a classroom, but living them through daily experiences bring both to life. Visiting coffee shops with friends, riding a camel and paragliding all provided valuable insights to help Isabel Spafford expand her understanding of Arabic culture and language.

The University of Mississippi junior with a double major in Arabic and international studies did all those things last summer in Morocco.

Spafford, from Albuquerque, New Mexico, arrived in Morocco on June 10 for the immersive summer of language and culture studies. The experience was partially funded annually by the UM Arabic Language Flagship Program, which is sponsored by the National Security Education Program. The university’s Arabic program earned flagship status in 2018.

“It is very easy to travel around in Morocco and there are a lot of things to do,” Spafford said. “Morocco is a really beautiful country, very safe, and there’s a lot to see. I was very pleasantly surprised by how easy it was to travel.”

Her days consisted mostly of studying at the Arab American Language Institute, or AALIM, in Meknes. A typical day included four hours of Arabic language study, three hours on Modern Standard Arabic and one hour of a Moroccan dialect. On Wednesdays, the class visited locations in the city for service projects or to enhance curriculum.

Weekends were spent with her language partner and other students from AALIM, exploring Meknes and experiencing all Morocco offers. 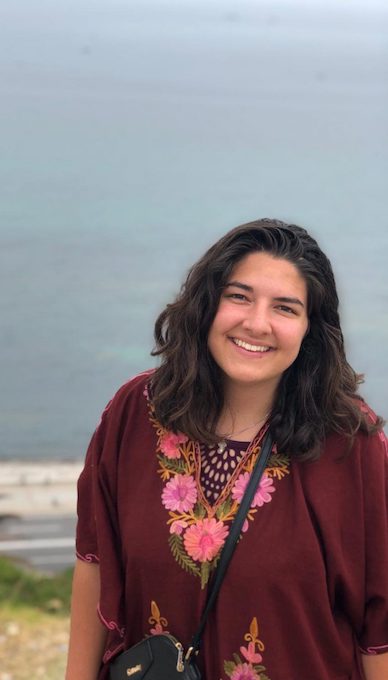 Isabel Spafford, from Albuquerque, New Mexico, spent her summer in Morocco, getting an immersive experience of language and culture studies. The experience was partially funded annually by the UM Arabic Language Flagship Program, which is sponsored by the National Security Education Program. Submitted photo

As part of the flagship program, Spafford will have an opportunity to apply for a capstone year, a yearlong intensive Arabic language and culture experience following graduation that expands on the summer experience. All seven Ole Miss capstone applicants were accepted into the national program in 2018. Spafford is considering capstone and wanted to be sure it fit with her goals.

“I wanted to get some familiarity with the program before I committed for a whole year,” she said. “I am glad I chose this program as I feel I learned a lot and am excited to go back for the capstone year.”

At AALIM, Spafford learned Darija, the Moroccan dialect of Arabic.

“The Moroccan dialect is very different from the standard Arabic I had studied before,” she said. “Moroccans also use a lot of French, especially with foreigners, so it often felt like I was juggling three languages: French, standard Arabic and Darija.”

While challenging, absorbing the languages is a lot of fun, she said.

Spafford enjoyed many adventures and took advantage of learning opportunities throughout Morocco. She was able to attend church where the services were in French and the congregation included mostly West Africans.

“I really enjoyed going to services there and getting to know people,” Spafford said.

One of her most cherished memories is celebrating Khawla’s birthday by paragliding with friends near Rabat, on the Atlantic Coast in the north.

“It was only $40 and we got to glide around for about 15 minutes,” Spafford said. “It was such a beautiful, awesome experience.”

The summer was not without challenges. Spafford said she didn’t always agree with her host family, which led to some tension at times. However, those situations also allowed her to gain unique perspectives she didn’t necessarily consider before, she said.

“Be thoughtful, but don’t come to conclusions too quickly,” Spafford said. “There are a lot of factors you’re not familiar with that keep you from fully understanding the situation.”

Keeping an open mind makes for the best outcome, she added. “Whatever you imagine, the reality will be much different, and it’s best if you can appreciate instead of comparing it with the version in your head,” she said.

While Spafford’s advice applied to most daily situations, she encountered one particular experience where her receptiveness was tested.

In Merzouga, she rode a camel, an experience she would not recommend to others. It is a jarring encounter because the animals are large and riders are lurched forward when the camel rises to walk, Spafford said.

“Most people really enjoyed riding the camels, but some reason, I was really scared of them,” she said.

Despite the challenges, Spafford said the trip was well worth it and offered advice to Ole Miss students considering studying abroad.

“When studying a language like Arabic, there are a lot of opportunities to be funded to study abroad,” she said. “Even if you aren’t a language major, go by the Office of National Scholarship Advisement and talk about scholarships you could apply for.”

“Learners of today have greater opportunities to experience the language and culture than ever before,” Clark said.

“The study abroad experience is invaluable to a learner,” Clark said. “It is a time when the language comes alive for them, where they realize the power of the language they are learning – its impact on people and its influence on their behavior.”