UM journalism graduate Will Jacks kicks off the SouthTalks spring series Jan. 29 with a talk about his photographs of Po’ Monkey’s Lounge outside Merigold. Submitted photo

The SouthTalks series, sponsored by the Center for the Study of Southern Culture at the University of Mississippi, is offering a wide variety of events this spring, including five lectures focused on movement and migration in the South.

SouthTalks explore the interdisciplinary nature of Southern studies and includes lectures, performances, film screenings and panel discussions. All events take place in the Tupelo Room of Barnard Observatory unless otherwise noted, and are free and open to the public.

“We have designed the center’s Future of the South Initiative to spotlight contemporary issues, but ones that have both deep roots in the region and the power to shape what life will be like here for years to come,” said Katie McKee, the center’s director. “The movement of peoples in, to and through the South is just such an issue, having exerted profound influence on the region’s past but clearly relevant to our current political moment.”

Will Jacks, a graduate of the UM School of Journalism and New Media, begins the SouthTalks series at noon Wednesday (Jan. 29) with photographs and discussion about Po’ Monkey’s Lounge outside Merigold. His photographs are also on display in the Gammill Gallery in Barnard Observatory through Feb. 28.

Jennifer Mizenko, UM professor of dance, and Rhondalyn Peairs, a Southern Studies master’s student, focus on “Moving Spirits: History of the Enslaved and Civil Rights through Dance and Song” at 5:30 p.m. Feb. 3. In this SouthTalk, members of the Lafayette-Oxford-University community embody local history through dance and song.

At noon Feb. 5, Garrett Felber, UM assistant professor of history, discusses his new book, “Those Who Know Don’t Say: The Nation of Islam, the Black Freedom Struggle and the Carceral State,” a definitive political history of the NOI that documents the interplay between law enforcement and Muslim communities in the postwar United States.

Mandy Carter discusses “Advancing Each Other: Building Coalitions across Communities” at 11 a.m. Feb. 13 in the Overby Center Auditorium. Carter is a cofounder of Southerners on New Ground, a human rights organization devoted to uniting LGBTQ+ people in the South and to assisting poor, rural and working-class Southerners in becoming leaders in shaping the region’s future.

Carter’s talk focuses on her 52 years of grass roots activism. She explores how diverse communities might unite around shared goals of peace and justice. Her visit is cosponsored by the Center for the Study of Southern Culture, School of Journalism and New Media, Sarah Isom Center for Women and Gender Studies, and Center for Inclusion and Cross-Cultural Engagement.

Members of Jessie Wilkersons’ Southern Studies 560 class helped collect oral histories from several women as part of the Black Families of Yalobusha County Oral History Project. Five of the students will discuss their work Feb. 19 as part of the SouthTalks series. Submitted photo

Reed, who lives in Atlanta, is a 1974 UM alumnus who grew up in Water Valley. She writes the column “Outstanding Black Women of Yalobusha County” for the North Mississippi Herald. In this SouthTalk, the students of SST 560 will present a multivocal, multilayered history based on interviews from their oral history project. Reed will speak during the Summit on Women and Civic Engagement, sponsored by the Sarah Isom Center for Women and Gender Studies, earlier that day.

Dolores Flores-Silva and Keith Cartwright present their film “Imagine Freedom: Sounding Yanga’s Cry across Gulf Shores” at 5:30 p.m. Feb. 20. The film pays homage to the Africans who won their freedom and examines how Afro-Mexican legacies still challenge people in spaces shaped by racial legacies across the Gulf.

The first movement and migration series lecture, Malinda Maynor Lowery’s “Their Own Kind of Removal: Lumbee Indians in the Antebellum South,” is set for noon Feb. 26. Lowery, a professor of history at the University of North Carolina and director of the Center for the Study of the American South, studies the Lumbee Indians of North Carolina and their long struggle working through the South’s racial binary and resisting the erasure that seemed an inevitable outcome of Indian Removal.

The next movement and migration series lecture is at noon March 4, with “Racist Kitsch for the Twenty-First Century? Anthropomorphic Asians, Kawaii-style and the Culture of Cute,” presented by Leslie Bow, the Vilas Distinguished Achievement Professor of English and Asian American Studies at the University of Wisconsin at Madison. Bow examines how new forms of racial kitsch evade contextualization as racist kitsch.

A musical performance with Skrontch Music is set for 7:30 p.m. March 4 in Nutt Auditorium. Skrontch Music is a project led by saxophonist, clarinetist and composer Byron Asher that explores the histories and lineages of jazz in the South through contemporary soundscapes.

Featuring a 10-piece New Orleans-based ensemble, Skrontch Music’s debut album incorporates elements of sound collage and text from primary source documents to address the intertwined histories of the formation of New Orleans jazz and anti-Jim Crow activism. The performance is sponsored by the Center for the Study of Southern Culture and the Department of Music.

The next movement and migration series lecture is at noon March 18 with “From Latino Orlando to International Memphis: Migration and Transformation in the American South,” presented by Simone Delerme. In this SouthTalk, Simone Delerme, the McMullan Assistant Professor of Southern Studies and assistant professor of anthropology, will share her ethnographic research that documents how Southern places are being transformed by an influx of migrants, primarily Latino.

The visiting documentaries series, set for 5 p.m. March 18 in the Overby Center Auditorium, brings in Jacqueline Olive with “Always in Season,” her debut documentary feature that explores the lingering impact of more than a century of lynching and connects this form of racial terrorism with modern racial violence. This event is cosponsored by the Oxford Film Festival, which is set for March 18-22.

At noon March 25, Christina Schoux Casey asks the question “‘Do you know what it means?’ New Orleans Englishes.” Casey, an associate professor of English linguistics at Aalborg University in Denmark, focuses her research on how language intersects with cultural commodification, neoliberal globalization, authenticity and nostalgia. In her SouthTalk, Casey will discuss New Orleans language, from “Who Dat!” to bounce music to Vietnamese and French. 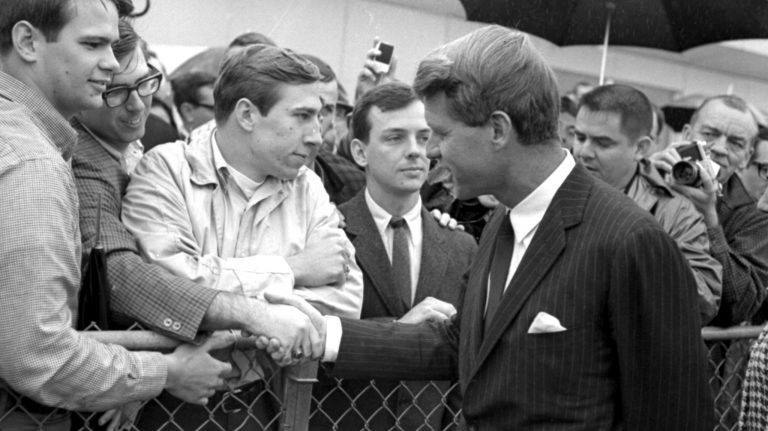 Mary Blessey’s film “You Asked for the Facts” focuses on UM student activists who brought Robert F. Kennedy to campus in the 1960s. The film is the subject of an April 7 SouthTalk. Submitted photo

UM Southern Studies alumna Mary Blessey presents her film “You Asked for the Facts” at 5:30 p.m. April 7 in the Overby Center Auditorium. Blessey is a Mississippi filmmaker who looked at UM student activists who devised a plan to defy Mississippi’s speaker ban and bring Robert F. Kennedy to campus to reveal the truth about former governor and staunch segregationist Ross Barnett.

The final movement and migration series lecture is “Slaughterhouse South: Migration, Ethnoracial Boundaries and the Social Organization of Labor,” presented by Vanesa Ribas at noon April 15.

Drawing on 16 months of work as a meatpacker in a North Carolina slaughterhouse, Ribas, associate professor of sociology at the University of California at San Diego, investigates the intergroup dynamics between migrants and native workers, showing how the experience of oppressive exploitation mediates relations between Latina/o migrants, African Americans and whites.

Reese is an assistant professor of geography and environmental sciences at the University of Maryland at Baltimore County.

Southern studies alumnus Chuck Yarborough and students from the Mississippi School for Mathematics and Science will share and discuss “Burial Ground Is Common Ground: Connecting Communities through Research/Performance” at noon April 22. This is an award-winning research/performance project based at MSMS, which has been recognized nationally and has inspired similar programs throughout the country. The presentation will include brief performance excerpts.

The Future of the South initiative lecture is “LGBTQ+ Activism and Advocacy in Mississippi,” set for 3-5 p.m. April 30 in Butler Auditorium at the Inn at Ole Miss. Co-hosted by the Isom Center and part of the Oxford Pride schedule, advocates and activists will discuss their work to make Mississippi a more welcoming, safer and fairer state for LGBTQ+ people.

For more information on the SouthTalks Series or the Center for the Study of Southern Culture, visit https://southernstudies.olemiss.edu/ or contact Thomas at amthoma4@olemiss.edu or 662-915-3363.