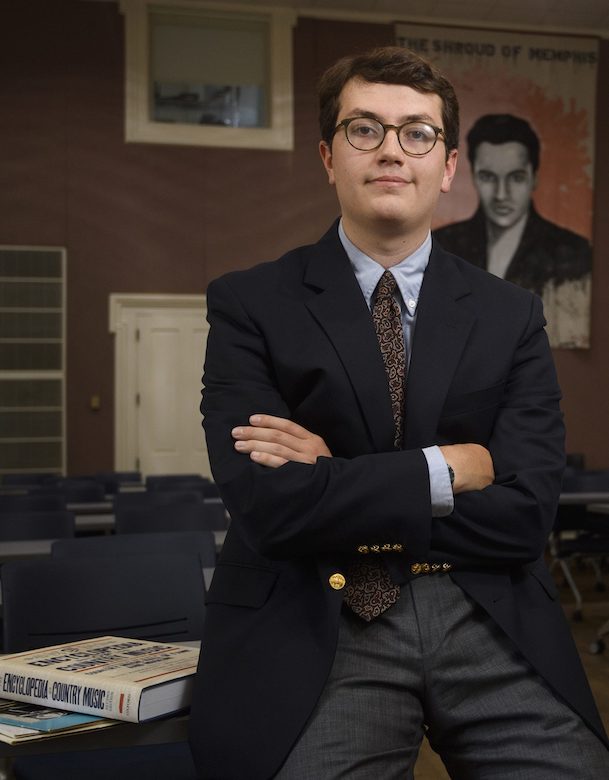 If you want to learn about country music, what better way to do that than to spend the summer in Music City, USA?

For Liam Nieman, a University of Mississippi senior who interned at the Country Music Hall of Fame and Museum in Nashville, Tennessee, for two months, being immersed in what’s known as the “Smithsonian of country music” provided invaluable insight.

Nieman, an English and Southern Studies major in the Sally McDonnell Barksdale Honors College, is planning on writing his honors thesis about country music. Since the museum collects, preserves and interprets the evolving history and traditions of country music through exhibits, publications and educational programs, and teaches diverse audiences about the enduring beauty and cultural importance of country music, it was the perfect place for him.

“I was especially interested in the outlaw country movement in the 1970s and, right now, the museum’s biggest temporary exhibit is ‘Outlaws & Armadillos: Country’s Roaring ’70s,’ so I knew that they had materials on display and cataloged,” said Nieman, who also served last year as arts and culture editor of the Daily Mississippian.

Nieman noted that he is intrigued by how country entertainment cropped up within the context of the suburbs, commercial culture and the rise of the Christian right.

“Second, I wanted to get some experience in a public history setting and see if that’s something I would be interested in pursuing after graduation,” he said. “I’ve taught, landscaped and written for money before, but figured it might be a good idea to see what a desk job is like.”

Luckily, his tasks were not simply to sit at a desk all day. He worked in the school programs department, which is part of the museum’s education department, with a 40-60 split between hands-on programming with students from around Tennessee and behind-the-scenes research and writing for the volunteers.

“The first few weeks there, I studied up on tour materials and shadowed several tours, so that I could give my own (tours) to students throughout June and July,” Nieman said. “I also helped with running our other programs like Dazzling Designs, in which young students design their own guitars/boots, and Songwriting 101, in which students of all ages work with a professional songwriter/musician to write a song.

“My research was all aimed at improving the experience and expanding the knowledge of our volunteers.”

Additionally, he wrote guides about the Kacey Musgraves and Keith Whitley exhibits, and planned a series of informational articles to educate volunteers about important topics in country music.

Nieman’s internship was funded by the Julian and Kathryn Wiener Endowment, which was established to help Southern studies students travel and participate in internships. Kathryn Wiener, of Jackson, is an advisory committee member for the UM Center for the Study of Southern Culture.

Nieman thinks about topics deeply and complexly and then sets about answering his own questions through research, reading and more research, said Katie McKee, the center’s director.

“Liam is one of the most intellectually curious students I’ve known at this university,” said McKee, who taught Liam in SST 401, a senior class he was enrolled in and excelled at as a sophomore. “He exhibits a self-propelled inquiry, so it is typical of Liam that he would have been interested not just in the museum where he worked, but in the city of Nashville and daily life there.

“Liam has really absorbed one of the central tenets of Southern studies: bigger stories begin with small ones.”

One of the requirements for Honors College students is a senior thesis, so Neiman relished the opportunity to expand his knowledge of country music. As he worked with the period of 1970s-90s, his research in the archives helped him find many helpful materials, so the internship directly affected his studies and gave him a strong foundation in the history of country music.

The biggest thing he learned this summer, though, is how little he actually knew about the genre of country music.

“I think you really don’t have much choice other than to realize that, once you see just how large of a collection of manuscripts, instruments, rhinestone suits, etc., in that building,” Nieman said.

Being in Tennessee’s capital city was an enlightening experience for the native of Mount Gretna, Pennsylvania.

“This was my first time truly living and experiencing life in a big city,” Nieman said. “I enjoyed how unpredictable routine things like trips to the library and grocery shopping could be.”

But the people he met were the true highlight of the summer.

“The best parts of the Hall of Fame were the folks I worked with in the school programs department, who were supportive and trusted me to just run with my curiosity throughout the summer,” he said.

Museum education is a compelling field because it shares the historical narrative of a specific art form and its relationship with popular culture, said Ella Marie Sullivan, the museum’s school programs manager.

Nieman condensed his knowledge clearly and coherently for students younger than he had encountered regularly, and he researched and reframed topics to make them relevant and accessible for the tour guides, she said. Additionally, thanks to that research, she was then able to critically examine the broader strokes of their tour narrative and create more concrete plans to make it more inclusive and truthful.

“He took feedback well and participated in team activities with germane gusto. We will miss him but know he will find success, professional and patient and persistent as he is.”