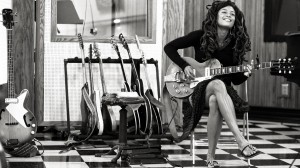 Continuing the exploration of Southern musicians and their craft, the Center for the Study of Southern Culture at the University of Mississippi is hosting its second annual music conference next month.“Innovation and Experimental Music and the South” is the theme of the 2013 Music of the South Symposium, set for April 3-4 and supported in part by the Future of the South Endowment in partnership with the Gertrude C. Ford Center for the Performing Arts. The discussion sessions are free, and the public is invited to hear graduate students, faculty and independent scholars share research on the culture, meaning and practices surrounding music in and from the American South.

“The conference is a combination of musicians and music scholars,” said Ted Ownby, CSSC director. “Academic talks, panel discussions, films about music and live music performances are all part of the event.”

Topics to be addressed include how innovative music originates in the South, situations in which the South’s established and much-celebrated musical genres – such as jazz, blues, country, rock ‘n’ roll, rap, bluegrass and gospel – make it difficult for people to make innovative music, when and why musical innovators choose to leave the South, or come to the South, or use those established genres as a basis for innovation.

The opening day (April 3) events scheduled include a display and discussion of materials from the Field School for Cultural Documentation at 10 a.m. inside the Blues Archive of UM’s J.D. Williams Library. A noon brown bag luncheon featuring Jim Market and Mark Neill discussing “A History of Southern Recording Studios” will be held in the Tupelo Room of Barnard Observatory. Neill produced the Black Keys’ 2010 album “Brothers” with the band at Muscle Shoals Sound Studio in Alabama.

Following the brown bag lecture, a series of panel discussions are scheduled in the Blues Archive. Speakers, topics and times are Beth McKee and Suzi Mills, “Southern Roots Music and Swamp Sista Culture” at 1 p.m.; Valerie June, Jake Fussell and Dent May, “Musicians Talking Music” at 2:30 p.m.; and Clay Motley, Jesse Wright and Scott Barretta, “Music and Cultural Tourism” at 3:15 p.m. Malcolm White and Tricia Walker will discuss “Music and the Creative Economy” at 4 p.m. in the Overby Center.

A Music of the South Concert featuring Valerie June begins at 7 p.m. April 3 in the Ford Center. Tickets are $10 at the UM Box Office, 662-915-7411 or online. Music performances at various venues on the Oxford Square begin at 9:30 p.m. and round out the evening.

Symposium activities resume Thursday (April 4) with Kaitlyn Vogt, Alan Harrelson and Mel Lassetter discussing “Popular Musicians and Southern Tradition” at 9 a.m. in the Blues Archive. Tyler Keith’s film “Jesus is My Rock” and performances by African-American gospel quartets follow at 10:30 a.m. Afternoon events in the Blues Archive include a 1 p.m. session and performance by Jennifer Ritter Guidry and members of the band Feufollet; Ben Sandmel and Charles Hughes discussing “Creativity and Its Sources” at 2 p.m.; Keith Fudge and DeLisa D. Hawkes speaking about “Race, History and Music in the South” at 3 p.m., and Alison Fensterstock, Holly Hobbs and Matt Sakakeeny talking about “New Orleans Hip-Hope and Bounce” at 4 p.m.

Climaxing the conference are a special edition of “Thacker Mountain Radio” at Off Square Books at 6 p.m., a beverage and food tasting hosted by the Yoknapatawpha Arts Council at 7 p.m. and more music performances in various venues on the Square beginning at 10 p.m.

The conference brings together the interests of the Southern studies program, Living Blues magazine, “Highway 61″ radio show, the Blues Archive and the Ford Center, Ownby said

“Studying music and making music have been crucial to the center’s history,” Ownby said. “This event should be both fun and smart, and we hope everyone involved or interested in the center will come, whether they make music, write about it or listen to it. The theme about innovation and creativity is broad, but it’s a question that matters to a lot of people who get frustrated by the idea that what we think of as Southern music needs to be old music. We want to think about how innovation happens.”