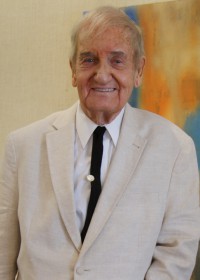 Lee McCarty is the cofounder of McCarty Pottery. Born in 1923, McCarty grew up in Merigold, and after graduating from the University of Mississippi, he and his wife left for Columbia University in New York where he received a master’s degree in education. The couple then returned to Oxford where McCarty taught science at University High School.

While in Oxford, the couple took pottery classes in the university’s art department. The McCartys created their first studio in the garage of their small home on South 8th Street and set about developing their glazes and style that would later serve as the foundation for McCarty Pottery.

The McCartys returned to Merigold in 1954 and opened their studio in an old mule barn. By the early 1960s, they had shown in several museums and exhibitions around the country and won first prize in 1961 in the National Show at the Delgado Museum in New Orleans. The McCartys developed their own glazes, which included jade, cobalt blue and their signature nutmeg.

In 1996, the Mississippi Institute of Arts and Letters awarded the McCartys their Lifetime Achievement Award and the University of Mississippi Museum of Art held a retrospective entitled Masters of Merigold: 40 Years of McCarty Pottery. In 2012, the Mississippi Arts Commission honored McCarty Pottery with the Governor’s Award for Excellence in the Visual Arts and the Smithsonian Institution inducted the gardens at the studio into their Archives of American Gardens.

Although his wife, Pup, passed away in 2009, McCarty continues working each day in the studio with his godsons, Jamie and Stephen Smith.

The Ole Miss Alumni Association will award seven distinguished alumni with its highest annual honors as part of Homecoming 2015. Created in 1974, the Hall of Fame honors select alumni who have made an outstanding contribution to their country, state or the University of Mississippi through good deeds, services or contributions that have perpetuated the good name of Ole Miss.