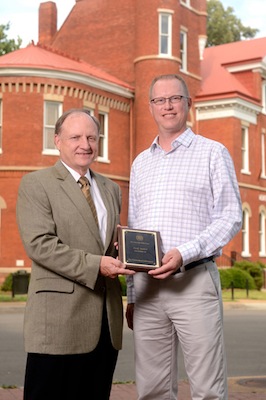 Teaching college freshmen is always a challenge, but Jeffrey Jackson has a passion for introducing students to new concepts and ideas.

“Introducing students to ideas they’ve never thought of before is one of the most exciting aspects of teaching sociology on a college campus,” said Jackson, an associate professor of sociology at UM. “Anytime a student tells me they’ve been turned on to a new idea or that they have a new appreciation for something going on in their world that they had never fully examined or considered before, that is really rewarding for me as a teacher.”Giving students the ability to see more clearly what is happening to them in their world, what could be more worthwhile than that?”

Jackson, who teaches Introductory Sociology, has been rewarded for his efforts with the 2012 Cora Lee Graham Award for Outstanding Teaching of Freshmen by the UM College of Liberal Arts.

“It is very humbling,” Jackson said. “I have enjoyed teaching these 101 classes for quite a while. They really are my favorite classes to teach. To be recognized by the university in this fashion for doing something I love to do is really a wonderful honor.”

Those who work with Jackson have noticed his dedication to freshmen.

“Jeff Jackson has taught two sections of Sociology 101 every fall since he came to Ole Miss in 1999,” said Jay Johnson, professor of anthropology. “Beyond the fact that this amounts to more than 1,500 students that he has introduced to the kinds of ideas that open a new way of looking at the world for many freshman, he has done this effectively and with humor.

“In fact, his courses serve as a gateway, attracting new major in sociology. He works extremely hard to make sociological concepts accessible to all students and, as student comments from his fall 2011 sections demonstrate, he has had considerable success.”

The key to teaching freshmen is connecting to their experiences, Jackson said.

“Freshmen are going through a big adjustment in their lives—-adapting to their new lives as college students, being away from home, etc.—-so ‘sociological concepts and theories’ are probably the last thing they want to think about,” he said. “You have to try to make the course material relevant to where they are and what they are experiencing. You have to try to connect with their reality as much as you can.”

Jackson hopes that the freshmen in his courses will learn to use sociology outside the classroom.