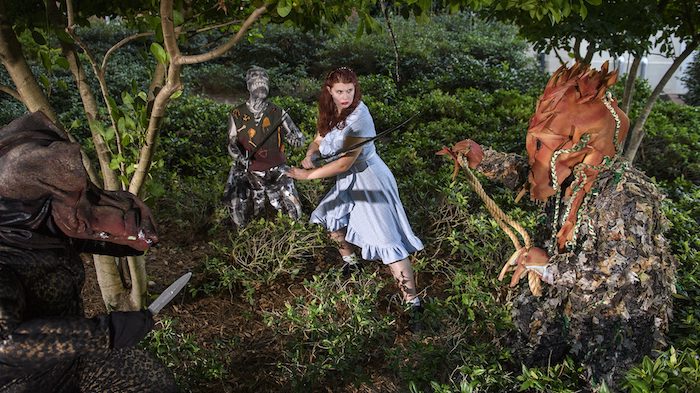 UM senior Sydney Hanson (center) stars as Agnes, a woman who enters an imaginary world of dragons and other creatures to learn more about her late sister, in ‘She Kills Monsters,’ which opens Friday (Sept. 28) as the first production of the Department of Theatre and Film’s 2018-19 season. Photo by Thomas Graning/Ole Miss Digital Imaging Services

Sometimes, life’s most important lessons come in unexpected ways, requiring us to abandon what we think we know and dive headlong into uncertainty just to uncover the simplest of truths.

“She Kills Monsters,” the first production of the University of Mississippi Department of Theatre and Film‘s 2018-19 season, requires surrendering to a wild and woolly escapade through the world of fantasy role-playing games – a world replete with hatchet-wielding ogres, homicidal faeries and a heaping dose of ’90s pop culture.

Written by acclaimed playwright Qui Nguyen, the show tells the story of Agnes Evans, a 20-something high school teacher who finally leaves her childhood home in Ohio following the death of her teenage sister, Tilly. When Agnes finds Tilly’s “Dungeons & Dragons” notebook, however, she tumbles down a rabbit hole into the imaginary world that was Tilly’s refuge – fast becoming painfully aware that she didn’t know her sister as well as she once believed.

“It is a masterpiece of inclusion,” said Michael J. Hood, the production’s guest director, who recently retired as dean of fine arts at Indiana University of Pennsylvania. “While the piece may be seen very simply as a defense of the set who are drawn to fantasy adventure at the kitchen table, the play is a paean to the human spirit more than it is a song in praise of ‘D&D.’”

At first, Agnes is skeptical about Tilly’s imaginary world. She always knew her sister was a little different, but she didn’t know just how much; it had never occurred to her that Tilly’s daily lived experience might have been something she needed to escape from.

The further Agnes journeys, the closer she gets to repairing her relationship with her sister, a relationship she hadn’t realized was wounded in the first place.

“Agnes is what is referred to as the ‘straight-man,’ said Sydney Hanson, a senior in the department’s acting program who stars as Agnes. “While everyone around her is so fantastical, she is ‘average,’ and it’s interesting finding out how she responds to this unknown world – on top of dealing with her sister’s death.

“She is an incredibly complex character who has hidden her emotions for too long, and during the play she finally begins to cope with loss and, in turn, becomes a better person.”

If emotional discovery doesn’t get your heart pumping, the combat scenes – and there are plenty of them – surely will.

Hood is a certified teacher of stage combat and a member of the Society of American Fight Directors, which is a big part of why he was sought out to direct this production. But when Hood is directing a combat-heavy show, he prefers not to manage the fight scenes by himself.

“It’s really easy to allow your focus to go entirely to the combat, by virtue of the requirements of safety,” Hood said. “You can end up spending hours – which need to be spent, don’t get me wrong – that can take you away from the process of directing the play and from working with the actors on scenes that don’t involve fighting.”

To curb the temptation to focus too much on fight training, Hood likes to bring in a special combat choreographer for fight scenes. Hood worked with department Chair Michael Barnett and the university to bring in fight trainer, director and choreographer Michael Chin, who recently spent a long weekend working with the cast and will spend another two days here before the show opens.

Chin was fight director for the world premiere of “She Kills Monsters” at The Flea Theater in New York.

“Michael Chin is one of the finest choreographers in the world, and certainly in the country,” Hood said.

As for the aforementioned fighting heroines, though Agnes has to learn how to slay dragons over the course of the play, Hanson is no stranger to onstage combat. She is an actor combatant member of the SAFD and has received training in seven of that organization’s eight recognized weapons.

She also serves as assistant fight choreographer for this show and has choreographed four other shows.

Even if it is make-believe, all that fighting can take its toll.

“My character is onstage basically the entire show,” said Hanson, who battles in all but three of the play’s many combat scenes. “It can be difficult on some days to find the energy to be as emotionally available and physically ready as the character demands. Thankfully, I have wonderful cast mates who help me push through each and every show.”

At its heart, that’s what the show is all about: the human quest to find our own “merry band of misfits” and to play the game of life together.

“If we’re successful, (audiences) will be surprised by the great heart of this show,” Hood said. “This is not just a fight show. This is a show about human relationships, about discovery, about family, what it means to be included and understood, and how incredibly important that is.”