Shakespeare’s First and Second Folio on Display at UM 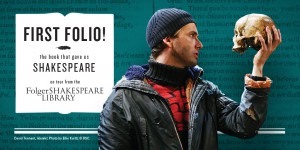 The University of Mississippi celebrates William Shakespeare this month with exhibitions of two rare books containing some of the first printed copies of the Bard’s best-known works.

The observance kicks off Monday (April 11) with “First Folio! The Book that Gave Us Shakespeare,” a landmark exhibit at the Gertrude C. Ford Center for the Performing Arts. The university’s J.D. Williams Library is supplementing this exhibit with the purchase and display of Shakespeare’s Second Folio.

The First Folio is the term scholars use to describe “Mr. William Shakespeares Comedies, Histories, & Tragedies,” a collection of 36 plays published in 1623. It includes 18 previously unpublished works, including “Macbeth,” “Julius Caesar” and “Twelfth Night.” Only 233 copies of the book are known to exist.

In commemoration of the 400th anniversary of Shakespeare’s death, the Folger Shakespeare Library in Washington, D.C. is sending a copy of the book for display in each state. The Ford Center is the chosen location for Mississippi.

“We are honored to have been selected to host the First Folio,” said Kate Meacham, Ford Center marketing director. “It’s a great opportunity for students and the community to see a piece of history. We hope as many people as possible see the exhibit and take advantage of all the different ways to learn more about Shakespeare.”

The exhibit begins with an opening reception at 6:30 p.m. Monday, April 11 featuring comments by Chancellor Jeffrey Vitter and Owen Williams of the Folger Library.  In “The History of Shakespeare’s Text” lecture at 7 p.m., Ivo Kamps, professor and chair of English, will trace the path from Shakespeare’s manuscripts to the publication of the First Folio in 1623. Kamps is the author of Historiography and Ideology in Stuart Drama, editor of several volumes and plays, including Shakespeare Left and Right, Materialist Shakespeare, Shakespeare and Gender, and Twelfth Night, Hamlet and Measure for Measure.

The folio will remain on display through May 1. It is free and open to the public in the Ford Center’s Studio Theatre.

In addition to the exhibit, the celebration will include performances and workshops, such as these two:

Karen Raber, professor of English, and Ivo Kamps, professor and chair of English, will discuss how Shakespeare remains relevant to modern audiences through filmic adaptations of his plays.

“They Fight” is one of the most exciting and ambiguous phrases Shakespeare wrote. His plays contain spectacular rapier & dagger duels, longsword battles and slapstick silliness. Join Matthew R. Wilson, professional fight director, assistant professor of performance and director of the Ole Miss Theatre performance of “A Midsummer Night’s Dream,” for a discussion of the art of being safe while looking dangerous and for demonstrations of the diverse weapons and fighting styles found in Shakespeare’s plays. En garde!

A full schedule of events can be found here. 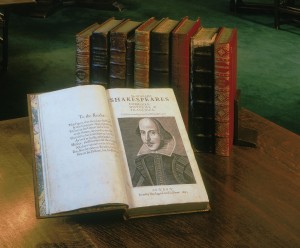 Shakespeare’s First Folio was published in 1623. Only 233 copies are known to exist, and one of those will be on display at the Ford Center through May 1.

“The Folger Shakespeare Library holds the world’s largest Shakespeare collection; it is the ultimate resource for exploring Shakespeare and his world,” Williams said. “We realize, of course, that not everyone can visit us on Capitol Hill and, in the spirit of the Folger itself, we wanted to share an important part of our collection with the country to commemorate the 400th anniversary of Shakespeare’s death.”

Visitors will see the original 1623 book, opened to the “to be or not to be” speech from “Hamlet.”

“With this as the centerpiece, our host sites across the nation have developed exciting original programming through which we hope that Americans of all ages can engage with Shakespeare, deepen their love of his language and discover how understanding his world helps us understand our own,” Williams said.

Thanks to a gift from the Gertrude C. Ford Foundation, the university also has acquired a rare volume of the Second Folio, making it a permanent part of the university’s collection. It is on display in the Department of Archives and Special Collections in the J.D. Williams Library.

Published in 1632, the Second Folio is an updated version of the First Folio. This rare copy belonged to Edwin Booth, one of history’s most illustrious Shakespearean actors, and the brother of John Wilkes Booth, the man who assassinated President Abraham Lincoln.

Edwin Booth was known for a more textually accurate use of Shakespeare’s works in his theatrical performances, a practice which was unusual for the 19th century. It is likely the actor consulted this volume in preparation for his lauded portrayals of characters such as the tragic Hamlet, historians say.

The Second Folio was purchased from the collections of the New York’s Players Club, a social group for actors founded by Booth, which had engaged the auction house Sotheby’s to negotiate on its behalf. The book, purchased with a $150,000 donation from the Ford Foundation, had an original estimate between $300,000 and $500,000.

“This copy of the Second Folio, owned by one of history’s foremost Shakespearean actors, is a tremendous acquisition,” Ford said. “It will be an enduring resource for the entire university, as well as the general public.”

Justice-Malloy notified Pulliam that the copy was going to auction while visiting the Player’s Club in December.

“I am overjoyed that the University of Mississippi will now be a resource for theater researchers nationwide,” Pulliam said. “This fulfills a vision of Dr. Rhona Justice-Malloy and myself.”

Pulliam and Justice-Malloy put together literature and images to begin the fundraising process to purchase the book. In January, Associate Provost Noel Wilkin contacted Pulliam with news that the Ford Foundation would be a major donor and the acquisition would move forward.

“They were excited about the idea of it being at a public institution where someone would really be able to enjoy it,” Justice-Malloy said. “I am so proud to be a faculty member at Ole Miss and know that they value the importance of such a book.”

The folio will be valuable to help recruit students and scholars interested in the arts, history and literature research, Justice-Malloy said.

“It’s a big deal to be able to say we have not only the Second Folio, but Edwin Booth’s copy,” she said. “It will be a point of pride for us and scholars and students can actually use this. I would like to extend an enormous ‘thank you’ to the Ford Foundation for making this possible.”

The First Folio display will be open to the public 8:30 a.m.-4:30 p.m. weekdays through May 1, with varying hours in the evening depending on performances. For a full schedule of events, performances, workshops and master classes, go to http://fordcenter.org/.