UM physicists part of the international team involved in discovery 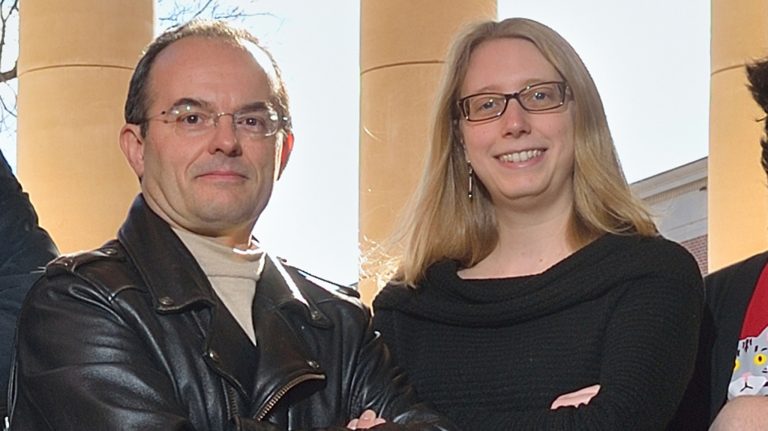 Scientists from the LIGO Scientific Collaboration, including physicists at the University of Mississippi, and the Virgo collaboration have reported the first joint detection of gravitational waves with both the LIGO and Virgo detectors.

This is the fourth announced detection of a binary black hole system and the first significant gravitational-wave signal recorded by the Virgo detector, highlighting the scientific potential of a three-detector network of gravitational-wave detectors.

The three-detector observation was made Aug. 14 at 10:30:43 Coordinated Universal Time, or 5:30 a.m. Central. The two Laser Interferometer Gravitational-Wave Observatory detectors, in Livingston, Louisiana, and Hanford, Washington, and the Virgo detector, near Pisa, Italy, detected a transient gravitational-wave signal produced by the coalescence of two stellar mass black holes.

“Virgo’s contribution is very important to pinpoint the direction in the sky of the wave” said Marco Cavaglia, UM professor of physics and astronomy and principal investigator of the university’s LIGO group. “The localization of the source with Virgo is more than 10 times better than with the two LIGO interferometers alone.”

A paper about the event, known as GW170814, has been accepted for publication in the journal Physical Review Letters.

The detected gravitational waves – ripples in space and time – were emitted during the final moments of the merger of two black holes with masses about 31 and 25 times the mass of the sun and located about 1.8 billion light-years away. The newly produced spinning black hole has about 53 times the mass of our sun, which means that about three solar masses were converted into gravitational-wave energy during the coalescence.

Being able to point to a smaller patch in the sky is important, as many compact object mergers are expected to produce electromagnetic emission in addition to gravitational waves. LIGO and VIRGO’s partner electromagnetic facilities around the world did not identify a counterpart for GW170814, which was similar to the three previous LIGO observations of black hole mergers. 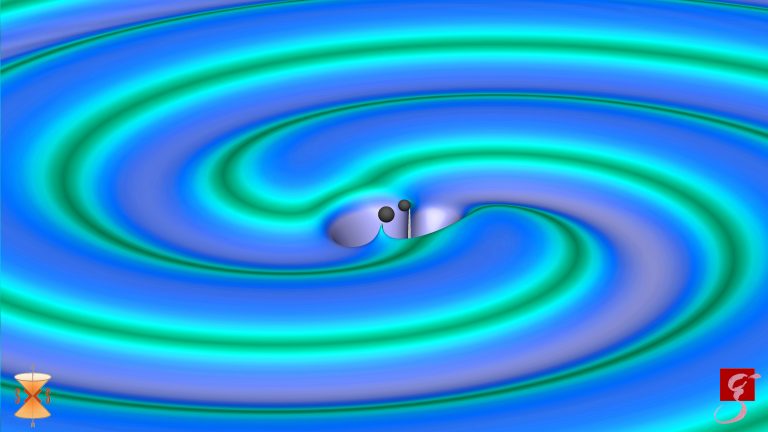 Two orbiting black holes spiral toward each other in this image from an animation prepared by the Max Planck Institute for Gravitational Physics. As the black holes merge, they generate gravitational waves, with dark green areas indicating weak fields and bright violet indicating strong fields. Submitted graphic

“It is wonderful to see a first gravitational-wave signal in our brand new Advanced Virgo detector only two weeks after it officially started taking data,” said Jo van den Brand of Nikhef and VU University Amsterdam, spokesman for the Virgo collaboration. “That’s a great reward after all the work done in the Advanced Virgo project to upgrade the instrument over the past six years.”

“It’s exciting to see that a new detector has joined the LIGO interferometers,” said Katherine Dooley, UM assistant professor of physics and astronomy and a member of the team that helped build the LIGO instruments. “Virgo differs from LIGO in some technical details, like the way the mirrors are suspended.

“It will be interesting to see how differences between Virgo and LIGO will shape the technological advances of the detectors in the future.”

Polarization describes how space-time is distorted in the three different spatial directions as a gravitational wave propagates. The analysis of the data shows that, once again, Einstein’s general relativity prediction is strongly favored over other alternative theories.

“Little more than a year-and-a-half ago, NSF announced that its Laser Gravitational-Wave Observatory had made the first-ever detection of gravitational waves resulting from the collision of two black holes in a galaxy a billion light-years away,” said France Córdova, director of the National Science Foundation.

“Today, we are delighted to announce the first discovery made in partnership between the Virgo Gravitational-Wave Observatory and the LIGO Scientific Collaboration, the first time a gravitational-wave detection was observed by these observatories, located thousands of miles apart. This is an exciting milestone in the growing international scientific effort to unlock the extraordinary mysteries of our universe.”

Advanced LIGO is a second-generation gravitational-wave detector consisting of the two identical interferometers in Hanford and Livingston. It uses precision laser interferometry to detect gravitational waves. 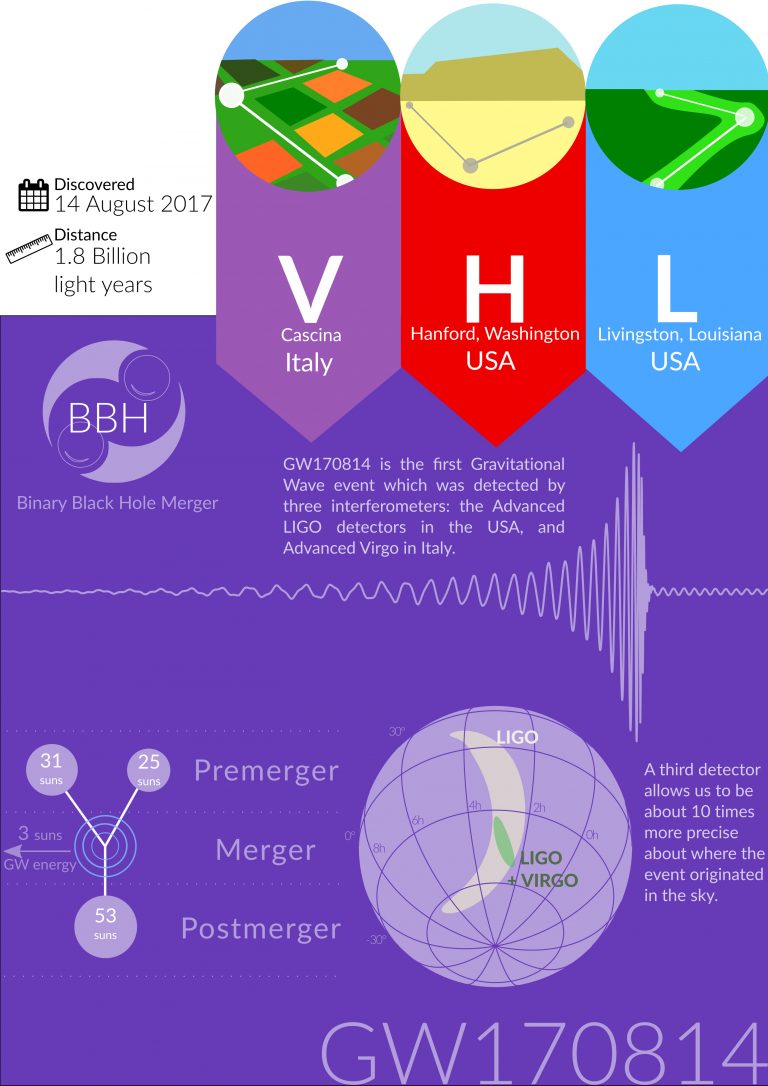 Since beginning operations in September 2015, Advanced LIGO has conducted two observing runs. The second, “O2,” observing run began Nov. 30, 2016 and ended Aug. 25, 2017. UM has been part of the LIGO Scientific Collaboration since 2007.

The new facility was dedicated in February 2017 while its commissioning was ongoing. In April, the control of the detector at its nominal working point was achieved for the first time.

The Virgo detector joined the O2 run on Aug. 1. The real-time detection on Aug. 14 was triggered with data from all three LIGO and Virgo instruments. Virgo is, at present, less sensitive than LIGO, but two independent search algorithms based on all the information available from the three detectors demonstrated the evidence of a signal in the Virgo data as well.

“With this first joint detection by the Advanced LIGO and Virgo detectors, we have taken one step further into the gravitational-wave cosmos,” said Caltech’s David H. Reitze, executive director of the LIGO Laboratory. “Virgo brings a powerful new capability to detect and better locate gravitational-wave sources, one that will undoubtedly lead to exciting and unanticipated results in the future.”

LIGO is funded by the NSF and operated by Caltech and Massachusetts Institute of Technology, which conceived and built the project. Financial support for the Advanced LIGO project was led by NSF with Germany (Max Planck Society), the United Kingdom (Science and Technology Facilities Council) and Australia (Australian Research Council) making significant commitments and contributions to the project.

More than 1,200 scientists from around the world participate in the effort through the LIGO Scientific Collaboration, which includes the GEO Collaboration. Additional partners are listed at http://ligo.org/partners.php.

The Virgo collaboration consists of more than 280 physicists and engineers belonging to 20 different European research groups: six from Centre National de la Recherche Scientifique in France; eight from the Istituto Nazionale di Fisica Nucleare in Italy; two in The Netherlands with Nikhef; the MTA Wigner RCP in Hungary; the POLGRAW group in Poland; Spain with the University of Valencia; and EGO, the laboratory hosting the Virgo detector near Pisa in Italy.