School’s Not Out for Summer: Teachers Learn About Race and Ethnicity 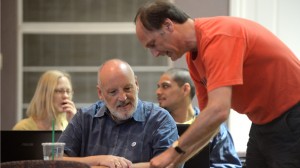 Kees van Minnen (right) of the Netherlands discusses race and ethnicity in the modern South with Chris Evans of San Jose, Calif., at the Gilder Lehrman Institute teacher seminar, hosted at the University of Mississippi by the Center for the Study of Southern Culture. UM photo by Nathan Latil.

Kees van Minnen (right) of the Netherlands discusses race and ethnicity in the modern South with Chris Evans of San Jose, Calif., at the Gilder Lehrman Institute teacher seminar, hosted at the University of Mississippi by the Center for the Study of Southern Culture. UM photo by Nathan Latil.

Teachers were the ones “getting schooled” this week at the University of Mississippi, learning about religion, urban problems and racial interactions.

“Race and Ethnicity in the Modern South,” a one-week seminar for teachers hosted by the Gilder Lehrman Institute of American History, or GLI, was conducted at the UM Center for the Study of Southern Culture. The partnership between CSSC and GLI is not a new one, although this is the first time the university has hosted this particular institute.

Ted Ownby, CSSC director, said he is honored to be chosen to host this seminar because the Gilder Lehrman Institute has a great vision for the study of American history and can recruit extraordinary participants.

“We designed this week’s seminar to think about a changing South – a multi-ethnic, modern South – both because for many people it may be an understudied topic, and also because it allows the kind of multiple perspectives our faculty members are especially good at studying,” Ownby said. “Studying historical tourism, for example, means studying both what happened in history and what encourages people to visit historic sites and even how they define things as historically interesting. In studying contemporary religion, or foodways, or urban and rural neighborhoods, we are trying to ask some new questions about what the South is becoming and how to study it.”

Topics focused on the South since the 1970s, examining how the South has changed through urbanization and suburbanization; the migrations of Hispanic, southeast Asian and other groups; responses to the civil rights movement; and other developments. The interdisciplinary seminar discussed history and identity, especially how various groups in the South identify with different understandings of history.

“I enjoyed the extended exposure to Charles Reagan Wilson because he is a towering figure in his field,” said Alan Maclachlan, who teaches 11th-grade honors American history at Mandeville High School in Mandeville, La. “Each day has been a new adventure, and I am looking forward to the discussion on race and slavery because that has been a longtime interest of mine.”

For Maclachlan, it was important to physically be on the Oxford campus.

“You can read about a place but it’s not the same as being there yourself,” he said. “There is no substitute for immersion in a place.”

During Streeter’s lecture to the 20 teachers, she provided background on the scholarship of the Southern Foodways Alliance and her work as an oral historian, giving advice on how to collect voices, sounds and stories.

“I think oral histories have become more popular because the equipment is more accessible and easier to use,” Streeter said. “People like talking about themselves and are really generous with their time and their stories, which is always amazing to me.”

Streeter led the group on a foodways tour of Clarksdale, discussing how to study issues of race and ethnicity through oral histories, restaurants and specific dishes. Skipper also led a tour of historic sites in Holly Springs, and Wharton took students on a bus tour to think about the small-town South.

“The Gilder Lehrman Institute of American History is thrilled to be a partner with the Center for the Study of Southern Culture,” said Lois MacMillan, a teacher in Medford, Ore., and a GLI seminar coordinator. “This has been structured differently than the other seminars, and each day has been built around a different discipline. It’s helped break the previous perceptions that teachers have about the South.”

Audrey Northway, a 10th- and 12th-grade teacher at Greely High School in Cumberland, Maine, attended the seminar to learn how to think historically.

“I felt as though I had a black hole as far as the South was concerned, and I wanted to be a more knowledgeable and aware teacher,” Northway said. “I felt it was my professional responsibility.”

The person who traveled the farthest was Kees van Minnen, from the Roosevelt Study Center in the Netherlands.

“I’m a historian who developed an interest in the United States South about five years ago and this is exactly the topic I am interested in studying,” he said.

“I have already scheduled another weeklong visit to the University of Mississippi in October,” van Minnen said. “I realized how little I knew about this specific region, and I think the best thing to do is go to a place and speak to the scholars there. I wanted to learn about the post-Civil War, contemporary South.”