Scholarship Spotlight: Biochemistry and nursing students enroll thanks to Everett-Williams 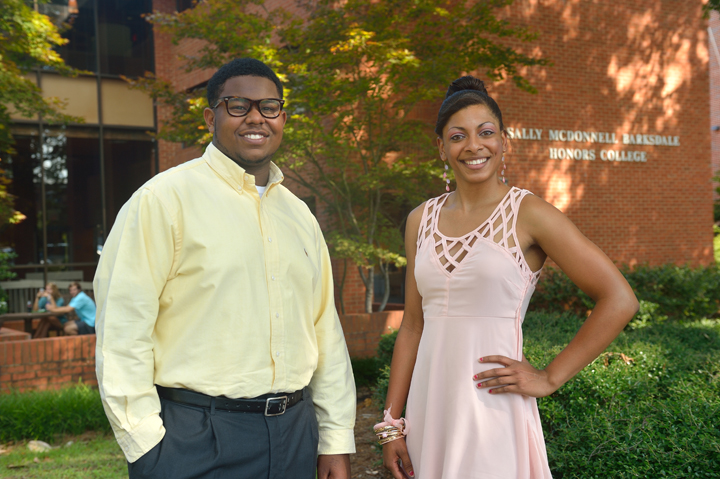 Biochemistry major Logan Wilson of Hattiesburg and Early Entry Nursing Program student Davelin Woodard of Oxford are the 2012-2016 recipients of the Everett-Williams Memorial Scholarship, one of the most prestigious four-year scholarship awards at UM.

In the final year of high school, students work hard to achieve 4.0 GPAs, high test scores and maintain exemplary leadership and service track records in the hopes colleges will stuff their mailboxes with scholarship offers. Likewise, universities are looking to keep their scholarship packages competitive to assure they can recruit high-potential students, especially from within the home state. The key for both are discerning philanthropists who invest their dollars in education.

While UM’s high profile programs like the Barksdale Honors College and the Freshman Early Entry 2+2 program in the School of Nursing enticed Logan Wilson and Davelin Woodard to choose UM, it was the Everett-Williams Memorial Scholarship that enabled them to achieve their dream of attending college without accumulating today’s all too common student loan debt, which averages $28,000 for 2013 U.S. college graduates.

Thanks to generous donors like the late Mr. and Mrs. Thomas Everett of Meridian, Miss., these two students are attending their top choice university, the University of Mississippi.

In 2008, UM School of Law alumnus and 1848 Society member William H. McMullen of Charlotte, N.C. coordinated the transfer of the Everett-Williams Memorial Scholarship fund to the University of Mississippi Foundation. The scholarship fund was initiated in the 1980s with an initial gift of $90,000 from McMullen’s uncle, Thomas Everett, on the condition that the endowment had to reach $1 million before any distribution began. Slowed but undeterred by the economic recession, the operations committee of the Everett-Williams Memorial Scholarship announced its first awards almost three decades after Everett’s first contribution, creating two four-year scholarships that total $13,000 annually: one for the Sally McDonnell-Barksdale Honors College (SMBHC), the other for Ole Miss First (OMF), a scholarship program that rewards scholastic achievement and leadership.

“Uncle Tom was a product of the depression era,” said McMullen. “His primary interest was the preservation of the corpus of money. He followed the stock market and was dedicated to being a good financial steward. He was also a steward of our family, always caring for others in times of illness or hardship.”

The deserving recipients chosen were 2012 incoming SMBHC freshmen Logan Wilson and Davelin Woodard, who have since met McMullen and his nephew, Phillip Allen and his wife, Toni, both UM alumni. Both students enjoyed meeting McMullen and the Allens, learning about the family that helped provide this opportunity. “It was an honor to meet them,” said Wilson. “I was glad to have the opportunity to shake their hands, hear the history of their family and how they came to dedicate this scholarship which has helped me and will continue to help others.”

McMullen was eager to help his uncle navigate leaving this legacy, as McMullen also came to Ole Miss to focus on studies, not to worry about how to pay his tuition.

“I was lucky to be able to complete law school in 1969 by just taking out a few manageable loans and working on the law journal for a small stipend. Back in those days the cost of law school was not what it is now. For today’s students, to borrow to go to school can be in the six-digit figures.”

Logan Wilson: A Force from Hattiesburg Carves his Niche at UM

Wilson, the recipient of the Everett-Williams Memorial SMBHC Scholarship, is proud to tell you that he is the product of North Forrest High School and a single-parent household. His mother instilled the importance of education in him from a very early age. As a teacher, she knew her son had potential, something she and his grandmother frequently reminded him, encouraging him to work hard and challenge himself. Throughout high school, Logan focused on academics and sports, excelling in both.

“I actually signed a junior college football scholarship, but my football coach pulled me aside and said, ‘Logan, you’re way too smart for that. With a mind like yours, you need to do something that uses your knowledge – football will always be there,'” said Wilson. “Plus, my grandmother taught me to listen to myself first and foremost, and not feel pressured to do what others want of me. Those two things and the influence of a lot of others helped me choose this path, which I feel really confident about.”

Wilson graduated second in his high school class in 2012 and was chosen for the NFHS’s Hall of Fame. He was class president all four years and president of the Student Council. He won awards in English, anatomy and physiology, and trigonometry/pre-calculus. Chosen as a Mississippi Rural Medical Scholar, he participated in a summer program where he took biology and pre-calculus at Mississippi State University while also shadowing doctors and learning the ropes of applying to medical school and choosing a specialty. The experience solidified Wilson’s dream to practice medicine, and he looked forward to starting down that path as an undergraduate.

“I didn’t get as many scholarship offers as I thought I might given what people had told me to expect with my credentials and grades,” said Wilson. “And the offers I did get weren’t schools I was really excited about. After being accepted to the Honors College, Ole Miss was easily my first choice – but I needed more financial assistance to make it happen. I was actually set to attend a different school because of their scholarship package, even though I had visited and didn’t feel it was the right fit for me. When I got the call offering the Everett-Williams scholarship here at UM, it was like a light came on – I knew the right things were finally taking shape.”

Today, Wilson is a sophomore biochemistry major who is making his own destiny here at UM. The summer between his freshman and sophomore years, he convinced Dr. Thomas Baylis at Premier Orthopedics and Sports in Hattiesburg to allow him to create a shadowing apprenticeship at the practice. “I shadowed him one day, and then I asked if we could make it a more formal thing. So they allowed me to come in three days a week. He gave me books to read, showed me how to read x-rays and gave me a full-scale experience to really see what the work was like. I loved it.”

When asked how his scholarship attributed to that experience, Wilson was quick to answer. “Having this scholarship allows me to strictly focus on my studies and my career path. I don’t have to worry about having to pay for college in a class-to-class fashion, semester to semester, and I know a lot of people that do. Not having that burden really does a lot for me and I don’t take it for granted.”

Davelin Woodard: A Hometown Girl With Her Eyes on Ole Miss

Davelin Woodard of Oxford, Miss., the Everett-Williams Memorial Ole Miss First Scholarship recipient, is also a sophomore SMBHC student. Woodard graduated top of her class from Water Valley High School where her mother, also a UM graduate, teaches STEM (Science, Technology, Engineering and Math) classes for ninth graders. Heavily involved as a high school student, Woodard was captain of her cheerleading squad while serving as vice president of BETA Club, treasurer of Mu Alpha Theta and participating in the drama club. She finished with a 4.05 GPA.

When it came time to begin the college search, Woodard made it very easy on her family. “Since I was old enough to think about college, Ole Miss has been my preference,” said Woodard. “Although I probably should have, I didn’t even apply to any other universities. I knew in my heart that this was the right college for me. Every time I visited the campus I knew I wanted to be part of this family.”

While supportive of her decision to attend UM and pleased at her acceptance to the SMBHC, Woodard’s family had begun crunching the numbers of tuition, housing and books. When word came that she had received the Everett-Williams Memorial Ole Miss First Scholarship, they were thrilled.

“I was so excited – to put it lightly – to hear I was receiving this scholarship,” said Woodard. “I had already received a few scholarships, and although I was grateful for them, they just didn’t add up to the amount I was hoping to receive. So when I got the email about the Everett-Williams Scholarship, I was ecstatic! I immediately called my mom, who shared my excitement. At that moment, it was just a name and a dollar amount. But when I learned the background story of the scholarship, got the opportunity to meet the donor’s family and learned I was one of the first recipients, those factors made this scholarship even more special to me. I will forever be grateful.”

Woodard worked at the Water Valley Piggly Wiggly during her last two years of high school and the summer before starting college. Her freshman year, Woodard began working at the UM Writing Center in the J.D. Williams Library helping fellow students become stronger writers, which she continues today. Woodard also volunteered tutoring elementary students, made the Chancellor’s Honor Roll and was inducted into Phi Eta Sigma honor society her first year at UM.

“I had your typical freshman year, meeting new people, learning about campus,” said Woodard. “Between the Honors College freshman retreat and Ole Miss First, I couldn’t have had a better way to acclimate to campus.”

Being part of Ole Miss First helped Woodard find balance between her many priorities, and get the most of her limited two years on the Ole Miss campus. “When I first heard about the weekly mentoring component of Ole Miss First, I thought it would be an inconvenience to commit that much time going to talk to someone I don’t know. Then I met Carrie, Elizabeth, Tyler and Kelly and honestly, they’re more than mentors, they’re friends. I had plenty of problems freshman year and they listened, gave advice and genuinely cared about what was going on in my life. They offered candy, coffee, water, even a map once when I got lost. We also have speakers who help us build better résumés, provide tips on public speaking plus lots of other topics.”

Her primary focus freshman and sophomore year, however, is balancing her honors curriculum and her pre-designed coursework for the Early Entry Nursing Program at the Medical Center, prepping her for transfer to the Jackson UMMC campus next year. Woodard has chosen a challenging path toward becoming a certified registered nurse anesthetist.

“I’m apprehensive about having to leave the Oxford campus next year, but I’m also excited about it,” said Woodard of going to UMMC as a junior. “Completing my honors thesis will certainly be a challenge, but because my family lives here, I am hopeful I can still meet with my advisors and manage to complete my thesis. I’m a homebody so I’m not eager to leave my hometown, but I know I need this kick out of the nest to help me grow and become more independent.”