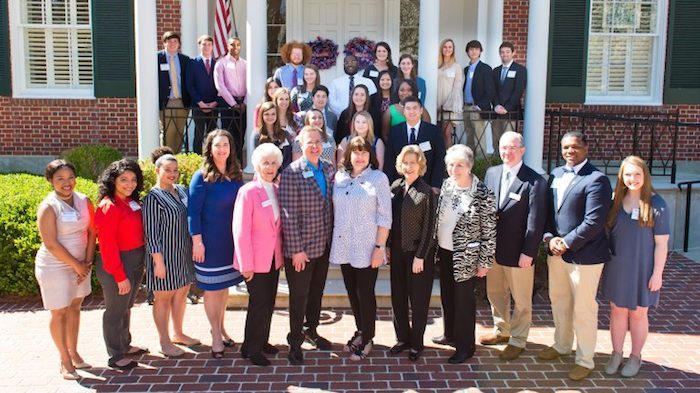 “As I look around this room, it’s hard to not get teary-eyed,” Samantha Brewer told a crowd at a recent luncheon at the University of Mississippi. “Because I know it was you. You all made this possible.

“You all made me possible. You made me being a teacher possible. And I can’t thank you enough. So let me start now. Thank you. Really, thank you.”

These were the sentiments expressed by Brewer when she and fellow Kelly Gene Cook Foundation scholars had an opportunity to meet donors at a recent luncheon hosted by Chancellor Jeffrey Vitter at his home on the Oxford campus.

Brewer, a senior elementary education major from Southaven, and her cohorts received a full scholarship to Ole Miss, thanks to the Cook Foundation.

The late Kelly Gene Cook Sr., of French Camp, was a pipeliner for more than three decades who joined Houston Contracting Co. in 1956 and became vice president and general manager for domestic and foreign operations in 1971. In this capacity, he dealt with pipelines throughout the Middle East, Brazil, Trinidad, Ecuador and Nigeria.

In 1976, he and a partner formed Gregory & Cook Inc., a pipeline contracting firm in Houston, Texas.

Cook was active in the industry associations, serving on the boards of the International Pipeline Contractors Association and the American Pipeline Contractors Association. In 1986, he and his wife, Peggy, formed the Kelly Gene Cook Sr. Charitable Foundation Inc., which primarily provides funds to support religious, charitable, scientific and educational organizations in Mississippi, Louisiana and Texas.

“Throughout my college education, not once have I had to worry about being able to buy my books or pay my tuition. I’ve never wondered if I’d be able to pay off student loans because I have don’t have any. Because of you, I did not have to shift my focus from school to work just to pay my bills, and that’s incredible because a lot of my friends cannot say the same thing.”

Kayton Hosket, of French Camp, who earned a master’s degree in curriculum and instruction from UM in May, echoed Brewer’s comments.

“The investment of the Kelly Cook Foundation in my education has been a life-altering blessing,” she said. “I am grateful for your support of me as a student and a young professional.

“The members of the Cook Foundation have been personable and interested in my life over the past eight years. Your generosity has opened the door for learning opportunities that will be used to impact students and educators both locally and nationally.”

Likewise, Savannah Fairley, of Lucedale, told donors she never imagined how much having the Cook Scholarship would change her life.

“The support from the Kelly Gene Cook Foundation allowed me to devote my efforts to better my mind,” said Fairley, who graduated in May with a bachelor’s degree in biological science. “It afforded me the opportunity to spend summers in Germany, taking language classes, and winter breaks doing research in a medicinal chemistry lab, rather than working to make sure I could pay for the books I would need for the upcoming semester.

“I was able to find my passions and dive into them. I was able to network and make connections with some truly amazing people. Being a Cook Scholar gave me the ability to get the most out of my university experience and I will forever be grateful. Thank you so much for the life-changing work that you do.”

The Cook Scholarship is open to entering freshmen from Mississippi who have scored at least a 24 on the ACT and have a GPA of 3.5 or higher. They also must have proven financial need and academic ability.

Rochelle, Cook’s niece, said her uncle was very proud of the way his foundation selected scholars and subsequently offered them stewardship and mentorship.

“He often said our youth are our most precious natural resource and that we should take care of them,” she recalled. “Of course, we want our students to be happy in their fields of study and to become successful members of our society.

“We have been very proud of our Ole Miss students and have had many graduate in various occupations. We also look forward to continuing our partnership with Ole Miss – a partnership that offers scholars donors who keep in touch with them and help them mature into self-assured individuals who graduate with no measurable debt.”

For more information about the Cook Scholarship, go to https://scholarsapp.com/scholarship/kelly-gene-cook-foundation-scholarships/.