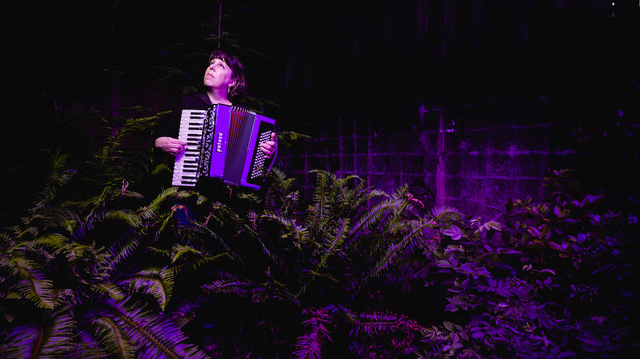 Jenny Conlee, of the Grammy-nominated band The Decembrists, will accompany a number of Ole Miss students alongside Sarahfest artist-in-residence Kelly Hogan for an Oct. 29 performance covering music throughout the decades. Photo by Jason Quigley.

This year’s Sarahfest is celebrating the do-it-yourself ethic that has been central to so many queer and feminist communities with its theme of “DIY Style.”

The annual festival, hosted by the University of Mississippi‘s Sarah Isom Center for Women and Gender Studies, will feature artists who have served as creative trailblazers in marginalized communities.

“Mainstream society has generally been hostile to queer and feminist communities; when mainstream media noticed them at all, it was mainly to stereotype, vilify and mock,” said Jaime Harker, Isom Center director. “Folks in these communities had to create their own spaces, their own aesthetics, their own acceptance, because no one was going to do it for them.

“I remain inspired by the DIY ethos of these many communities, who refused to accept their dismissal by mainstream society and have created art that is sassy, insightful, campy and beautiful. These trends sometimes reach mainstream culture, but their roots are firmly in the queer and feminist communities that nurtured them. The more we understand those roots – like the Harlem drag culture that Madonna reworks in her song “Vogue,” for example – the more we appreciate the diversity of our artistic inheritance.”

The festival kicks off this week with Wednesday’s (Sept. 29) pop-up art show See Us Differently, at the Powerhouse Community Arts Center, followed by Thursday’s “Thacker Mountain Radio Hour” and a Friday night (Oct. 1) performance by Indigo Girls at The Lyric Oxford.

This year’s festival also will host the first Sarahfest artist-in-residence, Kelly Hogan, who will perform Oct. 28 on a special Sarahfest/”Thacker Mountain Radio Hour” and Oct. 29 with Ole Miss music students and Jenny Conlee of the Grammy-nominated band The Decembrists.

Students will be selected for the performance through an audition process and then participate in rehearsals with the two acclaimed musicians before the performance at Club Sarahfest.

“This year’s theme invites us to explore what it means to create art, be in a band, to find that story and figure out how to tell it, to be an agent of change and to consider what that can and might look like,” said Theresa Starkey, Isom Center associate director.

“You don’t wait for someone to do it for you, you do it yourself. You bring the margin to the center and into focus. This ethic is fostered through a belief in collaboration and partnership.”

The monthlong celebration will close with the screening of the film “Marvelous and the Black Hole” at 7 p.m. Nov. 3 at the Malco Studio Cinema. The film was written and directed by Emmy-nominated writer Kate Tsang and premiered at the Sundance Film Festival earlier this year.

For a full listing of events and learn more about the festival, visit https://www.sarahfest.rocks/.