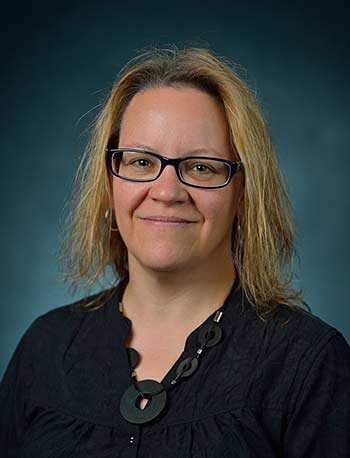 For the second time this year, a University of Mississippi professor has received a Faculty Early Career Development Award from the National Science Foundation.

Sarah Liljegren, associate professor of biology; is the sixth CAREER award recipient at UM in the last eight years. Jared Delcamp, assistant professor of chemistry and biochemistry, received the same award in June. This is the first time two UM faculty members have been selected in the same calendar year.

The award provides $606,079 over a five-year period for Liljegren’s project, titled “Roles of Organ Boundaries in Arabidopsis Abscission.”

“My lab is investigating the design of molecular circuits that allow plants to release their organs – e.g. leaves, flowers, fruit and seeds – at specific points in their life cycle,” she said. “We would like to know which genes determine where separation zones are found in plants and which genes direct the development of the specialized cells within these zones.”

Using the flowers from a small mustard plant, Arabidopsis thaliana, as a model, Liljegren and her team are studying mutants that disrupt the abscission, or separation, process. In this way, they can identify which design elements are essential.

Liljegren’s award will also support training in genetics at UM in several ways.

“I will be collaborating with other biology faculty to develop new laboratory modules for our genetics course and will also begin teaching an interactive version of genetics for students in the Sally McDonnell Barksdale Honors College,” she said.

Liljegren’s UM colleagues are excited about her achievement.

“With federal research funding at the lowest level most of us have ever experienced, this grant represents a remarkable feather in Dr. Liljegren’s hat,” said Paul Lago, chair and professor of biology. “I believe she will continue to have a significant impact in the department and on biology students at the university for many years to come.”

“This award places Dr. Liljegren among the top young scientists in the United States,” Kiss said. “She is clearly a leader in the field of plant biology, and I am very proud to have her as a colleague.”

Liljegren said she is appreciative of the research support NSF has provided throughout her career.

“This is my third NSF grant as a principal investigator, but this award is especially meaningful,” she said. “The five-year time period of the grant is simply unheard of for scientists in my field. It allows me to pursue a new research direction I’ve always wanted to explore.”

The timing of the award could not be better, she added.

“My lab has recently made some cool discoveries about some of the elusive interactions that regulate abscission zone formation in Arabidopsis flowers,” Liljegren said. “This grant will allow us to build on and publish these discoveries.”

Liljegren, Delcamp, Hammer and Dass all have had previous funding under Mississippi’s NSF EPSCoR Research Infrastructure Improvement Track-1 Grant. The CAREER awards attest to the effectiveness of that grant in helping to develop research competiveness within the state.

“CAREER awards are unique among single-investigator NSF awards in that they integrate research and education in a very substantial way,” said Alice Clark, UM vice chancellor for research and sponsored programs. “They go beyond funding a specific project. They are investments in the successful careers of the nation’s most outstanding faculty members in science and engineering.”

“These awards also exemplify the kind of success that can be achieved via mentoring,” Cohen said. “UM’s previous NSF Award winners helped mentor the new awardees in the development of their winning proposals.”

Liljegren earned her doctorate at the University of California at San Diego and a bachelor’s degree from the University of Washington. She was a postdoctoral fellow at the Salk Institute for Biological Studies and UCSD. She has contributed to 20 peer-reviewed journal articles and received 10 U.S. patents.

Courses she teaches at UM include Genetics, Human Genetics, Cell and Molecular Biology and Plant Cell and Developmental Biology.

Liljegren’s funding is provided through NSF award No. 1453733, which began in September and runs through August 2020.

Goals of the NSF CAREER program include providing stable support for five years to allow the career development of outstanding new teacher-scholars in the context of the mission of their organization and building a foundation for a lifetime of integrated contributions to research and education. Success rates vary across NSF divisions/directorates and competition years, but in biology are generally between 10 percent and 15 percent. The mathematics and physical sciences funding rates are around 20 percent.

For more information about the UM Department of Biology, visit https://biology.olemiss.edu/ or call 662-915-7203.