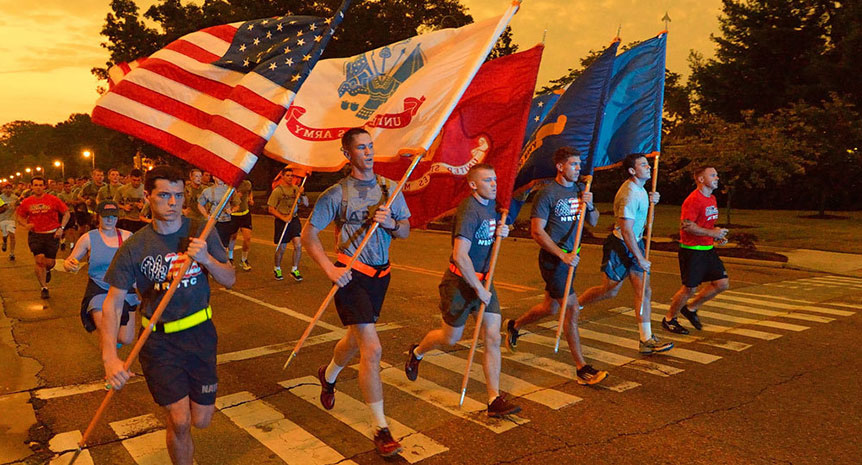 United by a new and renewed sense of patriotism, hundreds of University of Mississippi students, faculty and staff, along with local citizens, joined together September 11, 2013 for a 2-kilometer run observing the anniversary of the 2001 attacks in New York and Washington.

At the 6 a.m. start time, the sun had yet to rise over the horizon, but participants’ enthusiasm was already in high gear. Most were students too young to recall much about that fateful day 12 years ago that changed the world forever. Still, they understood the heroism displayed by veterans and peers in the ROTC program willing to go to battle to ensure everyone’s freedoms.

“Initially, I looked at this as a way to get some exercise and a topic for one of my reflection papers,” said Emily Hector, a freshman from Houston, Texas. “Now, having been a part of a 9/11 remembrance event, I recognize how amazing it is to be a part of something like this.”

Older participants were keenly aware of both that and other attacks on freedom and democracy since 9/11.

“It’s really important and nice to know that people still remember, respond to and support the things we’re trying to accomplish,” said Sgt. Michael Howland, coordinator of veteran and military services for UM’s Center for Student Success and Freshman Year Experience. “There’s a very patriotic spirit out here today. Everyone seems to understand why we’re doing what we’re doing.”

Starting at the Lyceum, the fourth annual 9/11 ROTC Run traveled east on University Avenue, north on Lamar Avenue and around the Oxford Square. The formation returned south on Lamar, west on University and ended in front of the Grove Stage.

“I’m very surprised to see how many people came out,” said Ashton Nicholson, a senior biochemistry major from Pensacola, Fla. “I participated in this during my freshman year, and this is the biggest turnout I’ve ever seen.”

D.T. Shackelford, a 2012 UM graduate who enjoyed an outstanding football career as a Rebel defensive tackle, spoke to the group at the end of the run.

“It means everything to me to be asked to speak to you guys,” Shackelford said. “You all are my heroes. You are the people who are sacrificing way more than any person ever sees. It gives me chills just to know how important what you do is. Thank you for keeping our country safe.”

Sgt. Joe Betterton, a military science instructor in the ROTC program, was pleased to see how the civilians connected with the cadets and their mission.

“This shows that they see the cadets are part of them and they are a part of the military,” Betterton said. “It’s vital that the connection is maintained if we’re to keep the events of 9/11 in our memories.”

In support of the UM Common Reading Experience book, The Unforgiving Minute, freshmen were exposed to certain aspects of the book during the run. “They have been given another campus event to write reflection papers on and, hopefully, stimulate conversation in the classroom,” Howland said.

The morning’s activities ended with a challenge to all present.

“It (the threat of terrorism and war) isn’t over,” said Gunner Sgt. Steven Roberts. “Be vigilant. Remember. Remember.”