Cadets, midshipmen and marines from the program gather for review by Chancellor Glenn Boyce 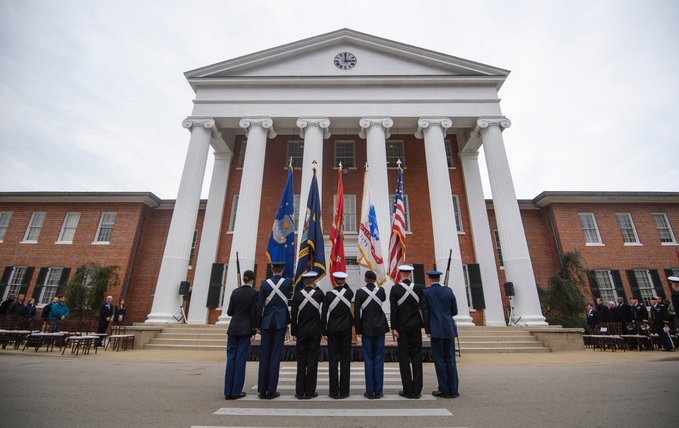 The University of Mississippi‘s ROTC cadets, midshipmen and Marines stood at attention Thursday (Nov. 14) in their crisp uniforms and presented the nation’s colors as part of pass in review, a storied military tradition that gives the commanding officer a chance to inspect the troops.

The event was held in front of the Lyceum steps in the Circle, where Chancellor Glenn Boyce inspected the university’s ROTC and offered words of encouragement as keynote speaker. Boyce, who became the university’s chancellor one month ago, said he was honored to address the dozens of aspiring military officers from UM.

“It’s an honor to stand here today among a group of heroes – our students – who have put aside their personal interests for the sake of serving something much larger than themselves,” Boyce said. “The University of Mississippi and the ROTC programs have a long history of service to our university, our state and our nation.”

The chancellor noted that 2018 marked the 100th anniversary of UM Army Training Corps, which was formed while the nation was preparing future officers who would become part of the more-than-2 million U.S. soldiers who fought in World War I.

The program became the Ole Miss Army ROTC, and its alumni have fought and died in every U.S. war since it was founded. That date in 1918 was the beginning of a long tradition of the university training the next generations of military leaders, Boyce said.

Boyce told the cadets, midshipmen and Marines that the experience of being at the university will shape the rest of their lives.

“This is a place that inspires students, students like all of you, to embark in powerful ways on lives of leadership and service,” Boyce said. “It is a place that empowers true potential through a community of caring that welcomes and embraces all students, and a place that offers dynamic and vibrant opportunities that will lead to lifelong connections.

“Just like me, I know you will never forget how this place embraced you and provided opportunities that are sure to impact the trajectory of your life in powerful and positive ways.”

U.S. Army ROTC SMP Cadet Johanna Keosseian presided over the ceremony and gave historical context to the event, which can be traced back to the Middle Ages, when rulers used them to project the strength of their regime.

In the U.S. military, the reviews were outlined in the Blue Book by Baron Frederick von Steuben, a Prussian, who became inspector general and then a major general of the Continental Army during the American Revolutionary War.

“At the beginning of the 17th century, militaries throughout the world were adopting the regimental system,” Keosseian said. “Regiments were assigned a specific color or number for ease of identification and position on the battlefield.

“In battle, the color party marched at the front and center of units, and by leading the unit in battle, the colors became prime targets, as victories in those days were expressed in terms of the number of enemy colors captured.

“Consequently, the color bore the brunt of the battle and suffered heavy casualties.”

At the ceremony, the following ROTC groups were recognized:

All the cadets, midshipmen and marines who graduate from the university are competitive with and have the same career opportunities as peers from any other ROTC program or service academy, Boyce said.

“As you continue on your chosen path, I have every faith that you will not only protect, but you will also change the future of our nation and our world,” Boyce said.