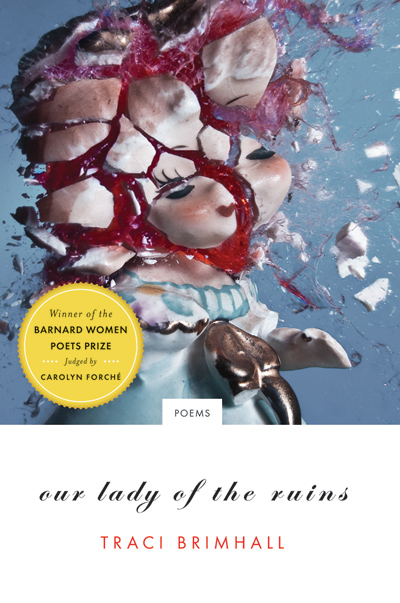 Traci Brimhall, acclaimed for her use of myth and folklore in her poetry, has been chosen as the sixth annual Summer Poet-in-Residence at the University of Mississippi.

Brimhall is the author of “Our Lady of the Ruins” (forthcoming from W.W. Norton), selected by Carolyn Forché for the 2011 Barnard Women Poets Prize, and “Rookery” (Southern Illinois University Press, 2010), winner of the 2009 Crab Orchard Series in Poetry First Book Award and finalist for the ForeWord Book of the Year Award. An early review for “Our Lady of the Ruins” in Publisher’s Weekly describes the poems as “part Dylan Thomas, part saint’s legend and part Tolkien.”

“When I learned I had been selected, I was in a local poetry salon where poets get together and drink wine and talk about poems, so it was a lovely place to find out,” said Brimhall, who teaches creative writing at Western Michigan University. “I was totally ecstatic.”

The Summer Poet-in-Residence program is designed to provide ample writing time to the poet while also allowing UM summer course offerings to be enriched by the presence of an active poet on campus.

She will give a public reading at 5 p.m. June 21 at Off Square Books.

Beth Ann Fennelly, associate professor of English and director of the MFA program, said Brimhall will be a wonderful poet in residence.

“She was a finalist for the last two years, and every year she applied, she sent a new manuscript, instead of repeating the same poems,” Fennelly said. “She kept coming very close, but this year’s poems blew us away. Many of them are set in Brazil and make use of myth and folklore as well as her mother’s experiences. What’s unique about them is their authority – they create a world immediately, without a lot of scaffolding or explanation. They are economical in their conception and wild in their delivery, rich and nuanced and moving.”

Brimhall, who is a doctoral candidate and a King/ Chávez/ Parks Fellow at Western Michigan University, will be in Oxford from June 15 to July 15.

She said she wants to tell students in her class visits about the importance of revision.

“Most writing textbooks only devote a chapter to revision or leave it out entirely,” Brimhall said. “An aspiring paleontologist told me that it is very difficult to tell a prehistoric fossil from the ground around it, and the most important thing a paleontologist could learn was how to tell the difference between rock and bone. It struck me that revision contains much of this same struggle.”

She also hopes to bring curiosity and passion to the students.

“As valuable as I believe a classroom environment is, I have learned in my own educational life that my passion has been one of my greatest teachers,” Brimhall said.

Her poems have appeared in New England Review, Virginia Quarterly Review, Slate, The Missouri Review, Kenyon Review Online, FIELD, Indiana Review and Southern Review. Brimhall is a former Jay C. and Ruth Halls Poetry Fellow at the Wisconsin Institute for Creative Writing and an Emerging Writer Fellow at The Writer’s Center. She has also received scholarships and fellowships to the Sewanee Writers’ Conference and the Disquiet International Literary Program.

She holds degrees from Florida State University and Sarah Lawrence College, and also serves as Poetry Editor for Third Coast and Editor at Large for Loaded Bicycle.