Associate professor of chemistry to study, lecture in nation’s capital 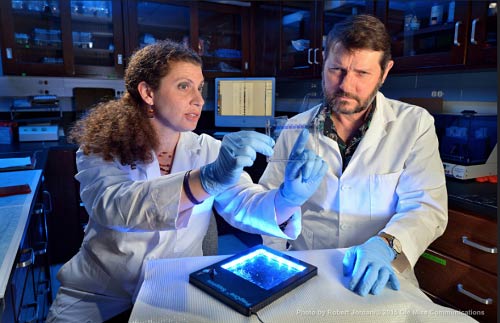 Randy Wadkins, an associate professor of chemistry and biochemistry at the University of Mississippi, has been selected as the inaugural Biophysical Society Congressional Fellow for 2015-2016.

Wadkins will be taking a break from his regular position to spend a year working on Capitol Hill. As a participant in the American Association for the Advancement of Science‘s Science and Technology Fellowship Program, he will also participate in an orientation on congressional and executive branch operations and a yearlong seminar series on issues related to science policy.

“I’m proud to have been selected to represent the BPS in Congress to communicate the importance of science to our elected officials who control funding for scientific research,” Wadkins said. “A large part of my job will be to explain to lawmakers in Washington why physical sciences are important to the nation, and hence why federal agencies like the National Institutes of Health and the National Science Foundation should be adequately funded to support scientific research.”

The fellowship is also an opportunity for Wadkins to learn the inner workings of the federal funding agencies and to see which research areas will be higher priorities for funding over the next few years.

“This, in turn, should allow me to be a resource and guide for researchers seeking funding at Ole Miss when I return,” he said.

Wadkins was congratulated by Charles Hussey, chair and professor of chemistry and biochemistry.

“The selection of Professor Wadkins for this distinction demonstrates the high esteem in which he is held by his peers in the field of biophysical chemistry,” Hussey said. “It indicates that his research has matured to the point where he is recognized as a national leader in his field.”

It is rare for scientists to receive congressional fellowships, Hussey noted.

“In any case, such distinction is normally given to faculty members in large departments at nationally prominent research universities,” he said. “Thus, his selection is even more meaningful for our department and the University of Mississippi.”

Wadkins has long been affiliated with the BPS, having attended his first meeting in 1987 as a graduate student at UM.

“It is a society of scientists who work in the area of studying physics and physical chemistry of biological molecules,” Wadkins said. “Biomolecules can do very special things, but they are still constrained by the laws of physics. I find biophysics very interesting and important.”

The fellow represents the interests of the society in Congress. Wadkins will be placed as a staffer in an office of a representative, a senator or a congressional committee.

“I won’t know until mid-September exactly where I’ll be working,” he said.
The application was a multistep process. Wadkins was required to make a statement of why he was interested in the fellowship and provide three letters of recommendation.

“I was fortunate to get Sen. Roger Wicker to write one of those for me,” he said.

After being selected as a finalist, Wadkins had to complete two other tasks. The first was a two-page written memo to a fictional congresswoman, wherein he expounded on three areas of public policy involving science that needed federal action. The second was an interview with a panel at the annual BPS meeting in Baltimore in February.

Shortly after the meeting, Wadkins was informed that he had been selected as the fellow for 2015-16.

“I felt my application for the fellowship was very strong,” he said. “Apparently, so did they.”