November 18, 2011 | By Kells Johnson and Kelly Strommer for The Daily Mississippian 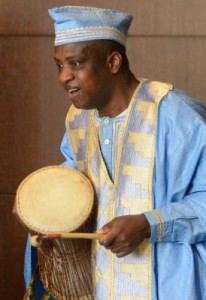 George Dor, holder of the McDonnell-Barksdale Chair of Ethnomusicology and professor of music

George Dor, associate professor of music and the founder of the Ole Miss African Drum and Dance Ensemble, directed “Sustaining the vision of cultural diversity” Tuesday.

The Nutt Auditorium stage was alive with African drums echoing throughout the large room, dancers performing in bright African costumes.

Dor’s goal is to create more cultural awareness. He emphasized the difference between “physical diversity” and “mental diversity,” and he acknowledges the University of Mississippi’s progress in achieving diversity. However, he urges the student body and faculty to go beyond noticing physical awareness of diversity by establishing cultural awareness on campus.

Dor said he agrees that the University of Mississippi consists of many different people, but he questions if we are really willing to understand each other’s different cultures and beliefs. He urges students to step out of their comfort zones and interact with the variety of cultures and to take advantage of the resources on campus.

“It’s knowing what is available and taking advantage of it,” Dor said. Dor’s perspective is that the UM community should work together to benefit from each other’s experience and knowledge of cultures. “It’s like drums. Every instrument plays its own beautiful tune, but the rhythm is never complete until they all come together,” he said. “Music should be used as a cultural ambassador.”

The university also hosts events to promote diversity, such as Diversity Rocks, which was created by Journalism Professor Robin Street. Diversity Rocks was a week-long event featuring a series of programs that celebrate diversity with an emphasis on anti-bullying.

Like Dor, Street said she wants students and faculty to go beyond classifying the university as diverse because of the increase in minority students, 23.7 as of this fall, and becoming better acquainted with people of different backgrounds, lifestyles, habits and traditions.

“I was hoping to open people’s minds up — to make them think,” Street said.

Street was inspired to create Diversity Rocks because she has experienced a wide range of diversity in her life, most importantly, her father George Street, an administrator at UM in 1962 when James Meredith enrolled as the first African American student.

Though there are people like Street and Dor who desire to make the campus more culturally aware, students still tend to segregate themselves in an unconscious fashion.

Some students question why.

Kirk Johnson, assistant sociology and African American studies professor, said he believes people self-segregate themselves to establish a sense of security. Johnson said the Deep South is rich with racist history, and it is easy to understand that racial tensions occur because of this. “Students of different racial backgrounds understand the history of the South, and generally, they tend to have an unspoken animosity toward other groups that aren’t of the same race,” Johnson said.

Johnson said it is also natural to feel comfortable around others who are like you, whether it be by race, values, religion or similar history. He also said he believes that people self-segregate themselves for affirmation, and we do this because we know our thoughts and opinions will be accepted by those who share the same beliefs.

Jeffrey Jackson, assistant sociology professor, said that a pack mentality is natural to most people.

“The truth of society is that each individual is racist in their own way, hence the lack of diversity throughout our campus,” Jackson said. “Students tend to associate with crowds that they fit into, and similarity attracts students to each other.”

Jackson said it is particularly uncommon for students to exit their own comfort zone, and this results in segregation. As seen on campus, international students generally feel more comfortable surrounding each other with other international students that might be going through the same experience. Ironically, however, the purpose of studying abroad is to get to know another culture. In essence, these students aren’t really getting the American experience, but rather experiencing the same cultures in the United States.

“It is with no doubt that much could be gained if we were even more diverse than what we already are,” Johnson said.