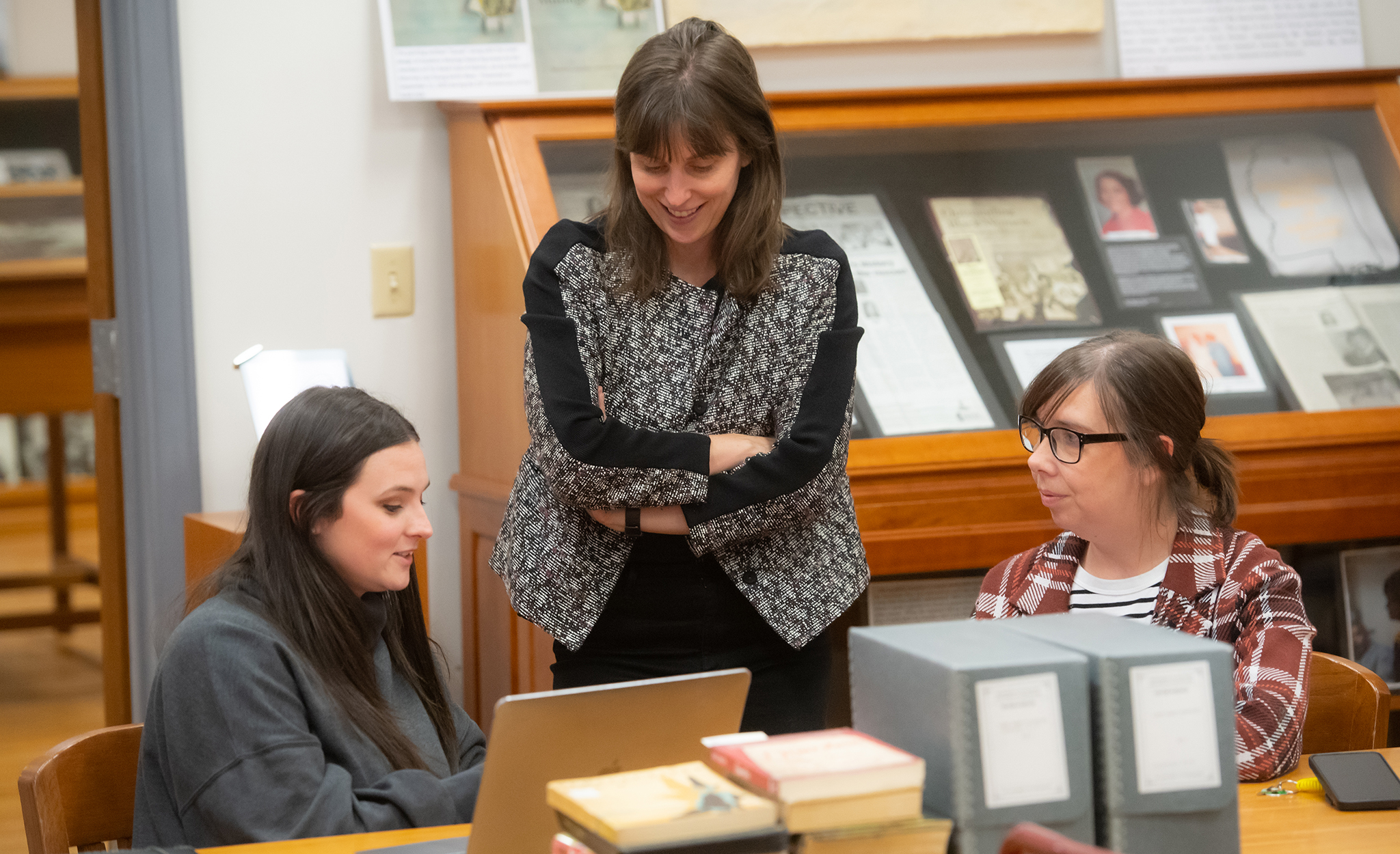 Eva Payne (center), UM associate professor of history, speaks with Madeline Burdine (left), a first-year graduate sociology and anthropology student, and Angie Rankin, a second-year sociology graduate student, about their display for the Queer Mississippi Exhibit in the Department of Archives and Special Collections in the J.D. Williams Library. The exhibit uses university archival materials and quotes from the Queer Mississippi Oral History project to show the history of LGBTQ+ people in the state. Photo by Kevin Bain/Ole Miss Digital Imaging Services

Eleven University of Mississippi graduate students have curated an exhibition of LGBTQ+ Mississippi materials as a part of a multidisciplinary study on the history of the queer South.

Amy McDowell, associate professor of sociology, and Eva Payne, assistant professor of history, are leading the cross-listed course Queer Mississippi, in which students study and exhibit evidence of the lesbian, gay, bisexual, transgender and queer communities in the state.

“We’re asking the question, ‘How do we tell this story with the materials that we have?’” Payne said. “What are the historical narratives? It’s been a hands-on experience from the start.”

The exhibit, which is on display in the Department of Archives and Special Collections of the J.D. Williams Library through January, is divided into three topics:

Throughout the semester, students gathered materials from the university’s archive collections that represent and display the history of LGBTQ+ people in the state.

Among the titles are vilifications of the LGBTQ+ community such as, “Are you as committed to family values as the radical feminists and homosexuals are to leftist agendas?” “Homosexual magazine’s attacks on Christ one of the ugliest ever” and “Hollywood is distorting the debate, using emotional appeals, trying to persuade America to view homosexuality as a civil-rights issue.”

Those headlines, Rankin said, show “how propaganda can infect the minds of people who are invested in it. It can halt progress.”

Burdine and Rankin are also showcasing examples of the LGBTQ+ community working with and being an accepted part of religious communities. 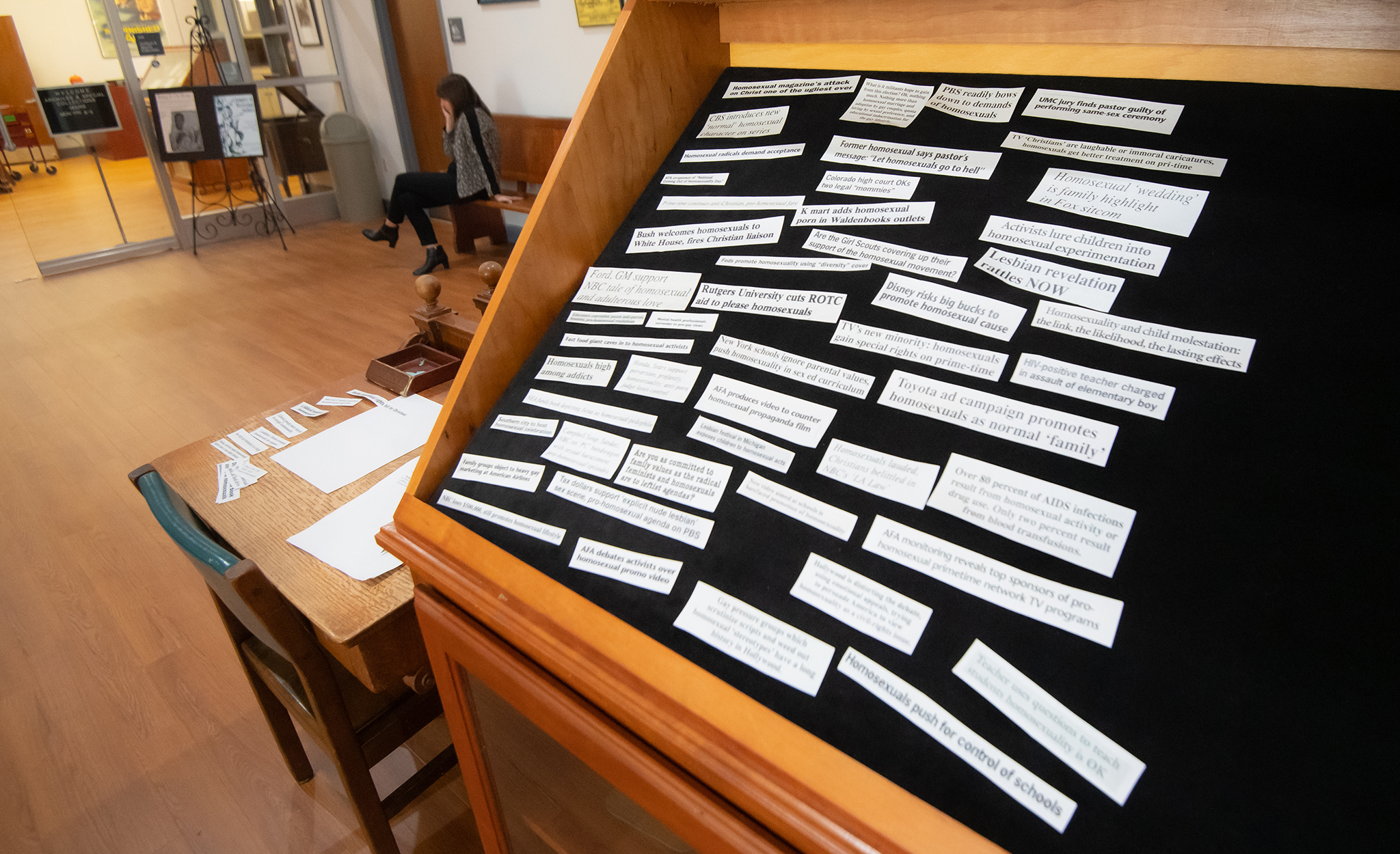 One of the Queer Mississippi exhibits shows different headlines regarding homosexuality from the Tupelo-based American Family Association, which has been critical of that community. The exhibit will be on display in the Department of Archives and Special Collections in the J.D. Williams Library through January. Photo by Kevin Bain/Ole Miss Digital Imaging Services

“The idea is that there is no room for queerness in religion, but that’s not true,” Burdine said. “Our goal is to show both sides, not just the negative. I hope someone who, like me, grew up in a conservative, Christian circle can see that there is space for queer people in religion, that we belong there, too.”

The class, which is the first of its kind, began with students not knowing exactly what to expect, McDowell said. As they began researching and listening to the oral histories collected by Queer Mississippi, however, the tone changed.

“Within a couple of weeks, the energy in the room shifted,” McDowell said. “Hearing someone’s voice – when it quivers when they’re nervous or excited – brings some sort of impact. It’s really incredible to see how passionate they are now.”

Aly Favilla, a first-year master’s student from Brooklyn, New York, and Grace Kaim, a first-year graduate student in history from Chicago, were charged with the visibility and signaling portion of the exhibit, which delves into how LGBTQ+ people identify themselves as queer to other members of the community, especially in hostile or unaccepting environments.

“Queer folks have always found ways to build a community,” Favilla said. “The culture is not imported from the North or from major metropolitan areas. They made it here.”

“There is really a need for this archive to be used in a wide variety of courses across campus,” McDowell said, noting that the interview and artifactual materials center on queer Mississippians, but also touch on social movements, race, poverty and rurality, among other topics.

“This archive is for everyone.”

The university awarded Queer Mississippi an Achieving Equity Grant over the summer, which McDowell and Payne said will allow the program to employ graduate students to continue the work of gathering and archiving oral and material LGBTQ+ history.

“We’re aware that we have holes in our history, in our materials,” Payne said. “The dream is to identify people who can do oral histories and archive materials so our collection can grow.”

The purpose of the exhibit, in part, is to show that the LGBTQ+ community has always existed in Mississippi, Kaim and Favilla said.

“Southern history is queer history,” Kaim said. “And it’s not the stereotype everyone thinks it is.”