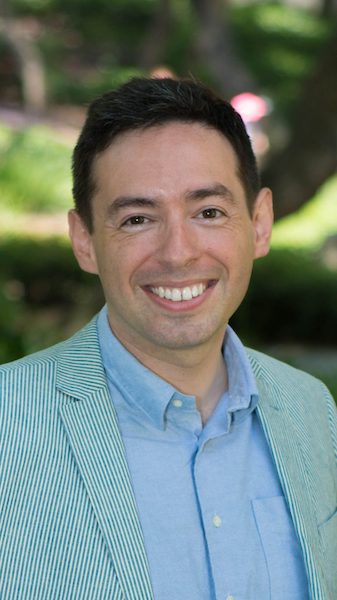 Leo C. Stein, an assistant professor in the Department of Physics and Astronomy at the University of Mississippi, is part of a team of physicists that recently used supercomputers and artificial intelligence to create the most accurate model yet of black hole mergers.

The research, conducted with physicists at Caltech, was published in the Jan. 11 issue of the journal Physical Review Letters. Stein and his colleagues report the most accurate computer model yet of the end stage of black hole mergers, a period when a new, more massive black hole has formed.

The model, which was aided by supercomputers and machine-learning, or artificial intelligence tools, will ultimately help physicists perform more precise tests of Einstein’s general theory of relativity.

Stein answered some questions about his background, why he started researching physics and some advice for students.

How did you become interested in the study of physics?

Stein: Ever since I was a kid, I wanted to open things up and find out how they worked – and how the pieces inside them worked, and what made those pieces, and so on. So I was always kind of reductionist. I just didn’t know that was called physics, until I got my hands on some popular books like “From Atoms to Quarks” and “A Brief History of Time.” I was really into math and computer science, too – both tools that are now extremely valuable for a practicing physicist.

When/How did you decide to pursue a career researching and teaching the subject?

Stein: I really settled on physics during college, when I got a broader sampling of math, computer science and physics courses. You could tell which students really excelled in, say, computer algorithms or real analysis. Though I really love math, I could tell that I had more physical intuition. I ended up doing some physics research over the summer and I was hooked.

Stein: Let me mention two things I love in physics. The first is being able to bring life to a physical system by simulating it and visualizing it from all different directions. Here’s one that I built that you can play with in your web browser. This toy is supposed to help understand how light can orbit around black holes!

Or, check out this one, which is the most recent one I worked on. That’s for rapidly visualizing how two black holes spiral into each other (using a bunch of physics approximations).

The second thing I love is when you finally have that “aha!” moment and really understand a concept that you’ve been trying to figure out. It’s like solving a puzzle. It might start out as just moving the pieces around (like doing algebra), but when you stare at the pieces long enough, up close and far away, you get to know those pieces. They’re not just abstract concepts anymore; they act in certain ways and have their own natures. Once you get to know all the pieces, you can finally solve the puzzle.

Tell us a little about courses you teach at UM.

Stein: Last term, I taught an advanced classical mechanics class for graduate students. Most of my exposure to the advanced topics was in picking them up along the way in research – I didn’t take such a class during grad school. So, I also organized my own understanding of the material a lot by having to teach it (it would have been great to have that organization before I prepared the course!).

Right now I’m teaching electromagnetism for undergraduate physics majors. The last time I took an electromagnetism course was in 2006, in graduate school, so this feels like catching up with an old friend.

Stein: Do as many thought experiments as possible (and expose yourself to the old classics). So much depends on a good understanding of linear algebra – try to learn it deeply, and have it down cold. You can get a lot of understanding just by dimensional analysis (that is, making sure you get the exponents and units right; this is especially true in astrophysics, where nobody minds being off by a factor of 5 or 10 at first).

Some things that are “shortcuts” are not just tricks but are actually really deep. This is especially true if they rely on symmetry. A good understanding of symmetry (group theory) is priceless in theoretical physics.