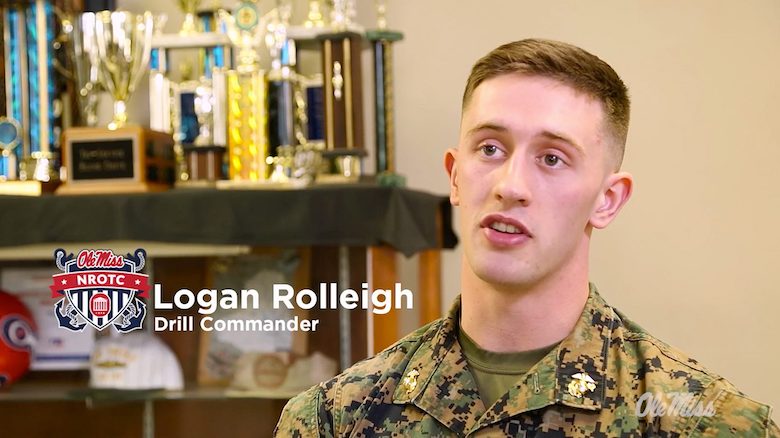 Logan Rolleigh is the drill commander of the UM Navy ROTC Drill Team, which will compete in the ‘national championship’ of drill competitions Friday (March 1) at Tulane University.

The University of Mississippi  Navy ROTC Drill Team will participate in a national competition Friday (March 1) at Tulane University. The Mardi Gras Drill Meet is considered the “national championship” of drill competitions.

Ole Miss midshipmen are in the final stages of preparation and will travel to New Orleans to represent the university in events that include platoon inspection, platoon armed basic drill, squad basic drill, color guard, platoon exhibition and individual exhibition.

Ole Miss drill team commander Logan Rolleigh, a senior from Heber Springs, Arkansas, is in charge of this year’s squad. He sat down with University Marketing and Communications to answer questions about the team, the competition and what this event means to it:

UM: What is the Navy ROTC drill team?

Logan Rolleigh: The drill team is a collection of freshmen and sophomores and also any other midshipmen who want to join through the Naval ROTC program, who learn Marine Corp drill movements, and we perfect them to the point where we can go to competition and we can hopefully win or place very highly in a very difficult competition.

UM: What is your role?

LR: As a drill commander, I command the platoon and also help to facilitate the younger generation of commanders to come up and learn how to lead a group of individuals through the Marine Corp drill movements successfully and make sure they hone their skills to where everything is flawless. My role is to be the head coach, basically. I’ve been drill team commander for last two years.

UM: Why is drill team important?

LR: It is voluntary for anyone but freshmen and sophomores. It is designed to create and instill discipline and also esprit de corps within the unit so that whenever we go win a trophy we can bring recognition back to our unit and help the team bonding aspect of our unit.

UM: What is the Mardi Gras Drill Meet?

LR: It’s a drill meet where all these different teams like Villanova, Texas A&M, West Point and even the Naval Academy will come and they’ll compete against each other to see who can do the best movements, who can make them the most clean and crisp and who can look the best and perform the best and fly though the commands the quickest with no faults. It’s a competition through different events. This is considered the championship, the national championship.

UM: What goes into preparing for this meet?

LR: We start the second week of the first semester training up the freshmen mainly, because they know nothing about drill, so we will go through basic rifle movements first and then add in marching, and we’ll work throughout that semester and then even harder the couple months before the drill meet of the spring semester. After that, we give them a break for the rest of the spring semester and summer and then we hit it hard again second week of fall semester.

Right now, we are hitting about two hours per week per event. So, if a person is on both color guard and squad basic, they’re doing four hours of drill per week.

UM: How much more extra work is the drill team for midshipmen?

LR: We have to work around each of their schedules, and not only just class schedule but supplemental instruction schedule and lab schedules, which is very difficult because these are some of the most active students here on campus. They’re also trying to balance ROTC, so it just adds a couple hours more per week, but there’s a lot of mental preparation that goes into it all. So, it all adds up to probably more than your average student and definitely a bit more than a regular ROTC midshipman.

UM: What are your goals as commander for the team this year?

LR: To win, first and foremost, and secondly, to make sure we build up our midshipmen and make sure that they are able to work as a team and eliminate the individual aspect. We do that through the discipline and espirit de corps that comes with winning and the drill team practice beforehand.

UM: What is one thing you want Ole Miss students to know about drill?

LR: Just like with other clubs, sports and intramural sports, it’s an event which we compete against other schools. And even though it’s not put on ESPN or anything, it’s extremely important for us to go out and have the University of Mississippi’s name out there, to be able to win, too, and succeed. Last year was the first year we brought home a trophy in a long, long time, and it was a great feeling to bring that recognition back to our school and our unit here.