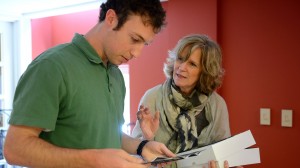 Students in Kristina Ford’s class have gotten a taste of real-world public policy this semester by helping the city of Oxford explain taxation to local residents.

“In this class, the premise is that it’s really thrilling to come up with a public policy that you think is going to fix whatever problem there is in society,” said Ford, a University of Mississippi visiting professor in public policy leadership and one of America’s best-known urban planners, thinkers and writers. “But it isn’t enough to create the public policy; you have to imagine how it’s going to be implemented and to my mind, the real thrill is implementing your idea.”

Ford met with Oxford Mayor Pat Patterson and the duo discussed how few people understand how property taxes are determined or what they fund. So Ford asked the 19 students in her PPL 498 Special Topics class to work with the city of Oxford to create a “Friendly Guide to Property Taxes,” which was designed to break down the complicated nature of property taxes and leave citizens with a better understanding of why they pay property taxes, how much they pay and other basic information.

The project began by separating the class into groups. Each group assembled a rough draft of what they thought was the most important information, while keeping it simple and easy to read. The class then went through each group’s pamphlet and chose the best information to put into one final document.

“Dr. Ford really pushed us to critically think about all the elements of city government, and then we were able apply them to a real situation and in our conversation with the mayor,” said Meghan Litten, a senior public policy leadership and liberal studies major from Petal. “I think a lot of the feedback was fresh and intriguing to the mayor because it was coming from college students who have been studying municipal governments and bureaucracies for the last four months.”

The “Friendly Guide to Property Taxes” was truly a group effort, and each person in the class contributed to the project, said Lyda Phillips, a public policy leadership and theatre major from Durango, Colo.

“Dr. Ford has helped me immensely in better understanding the way government bureaucracy works and how challenging it can get when you are trying to make a change,” Phillips said. “In this class, we are able to hear stories from the personal challenges she has had to overcome in working as a city planner in New Orleans after Katrina, but we also read about other bureaucratic obstacles, such as the Oakland Project, and how we can learn from these mistakes.” 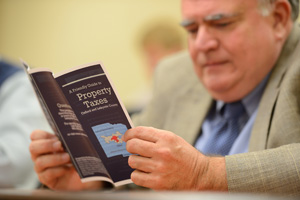 Ford said her aim is not to show the students how to avoid the pitfalls of a bureaucracy or how to fix people so that they don’t do those things, but instead, to teach them about the particularities about certain events.

“I want the students to know what being a public policy leader means, and in a way, it means agility – mental and professional agility,” Ford said. “I want them to understand details so that they understand what it takes to implement policy, so that is the academic part. I also want them to have read enough to do service learning, do something with the city and get in contact with the people they are just reading about in a book.”

At the end of April, the class presented the pamphlet to the mayor.

“Presenting to Mayor Pat Patterson was quite exciting because it was the first time for him, as well as other city officials, to see the finalized copy in print form,” Phillips said. “Meeting with the city officials was very rewarding because they truly took an interest in what Ole Miss students were doing. It was great to see the city and the university coming together to help the public.”

Besides helping the city, the students are learning to think on their feet.

“The great thing about teaching is seeing the students use their imaginations and asking something that someone hasn’t thought of before,” Ford said.

Ford holds a doctorate in urban and regional planning from the University of Michigan and was, until her full-time entry into public service in 1983, associate professor in the Graduate School of Public Administration at New York University. She was director of city planning in New Orleans from 1992 to 2000.

For more information on the Department of Public Policy Leadership, visit https://www.olemiss.edu/depts/leadership/index.html.