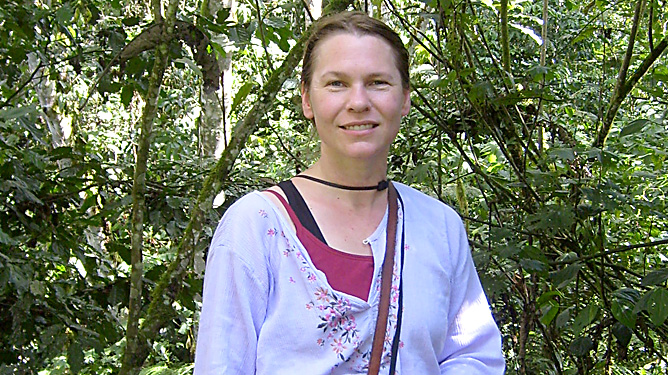 When Laura Johnson returned from her first trip to Africa – a yearlong study in Kenya as a University of Mississippi junior in 1989 – the director of study abroad gave her a brochure for the Fulbright Scholar grant and told her she’d need it one day.

That director was right. In January, Johnson, a UM associate professor of psychology, will travel to East Africa as a 2012-2013 Fulbright Scholar to conduct research on youth developmental assets and civic participation among vulnerable youth in Tanzania and Uganda. “In psychology, about 95 percent of all published research focuses on less than 5 percent of the world’s population,” said Johnson, who has served in the United States Peace Corps and traveled to Uganda as a Fulbright Fellow in 2000 to conduct doctorate research on integrated care for depression.

“I’ve always been interested in marginalized groups that are not on the radar of people in academia, or psychology in particular. Youth living in Africa tend to get ignored, yet there’s so much we can learn. I’m really interested in resilience and strength and how people are able to draw from community, culture and themselves to not just survive but to thrive and contribute to the betterment of society.”

Over nine months, Johnson is to collaborate with national partners to survey 1,200 African youths ages 14 to 17 in five different regions within Tanzania and Uganda. She will also interview older members of the communities to gain cultural knowledge about the best ways to promote civic engagement.

Participants in the youth study will focus on vulnerable youth, such as former child soldiers, adolescents with HIV and street children, including homeless and orphaned youth, Johnson said. The study will help shed light on ways in which culture and context produce unique developmental strengths, and explore the pathways to civic participation.

“A major challenge of the 21st century is how to best mobilize youths’ sense of purpose to work toward peaceful and sustainable societies,” Johnson said. “Contextual challenges in East Africa, such as poverty, disease, environmental degradation and civic conflict, threaten adolescent development and well-being. At the same time, strengths and assets such as cultural values, ethnic identity and community or school supports may contribute to youths thriving, their sense of purpose and their participation in communities.

“In the study, my colleagues and I will explore how internal developmental assets, such as self-efficacy and ecologically based assets, such as supportive parents and safe schools, are related to youth participation and purpose.”

Since her first trip as an undergraduate, Johnson has conducted research in the area multiple times, including through a National Geographic Conservation Trust and several UM internal grants. She also served three years on the American Psychology Association’s Committee on International Relations in Psychology, where she worked to advance psychology as a globally relevant discipline.

“Dr. Johnson has become a widely recognized authority on multiculturalism and diversity,” said Michael Allen, chair of the UM psychology department. “She has carefully nurtured relationships with counterparts in academia in a number of African countries, and this has allowed for important collaborative research. Further experiences abroad will only increase her awareness of relevant issues in understanding not only how our cultures are different but the many ways that they are so similar.”

Johnson, who joined the faculty in 2003, also teaches multicultural psychology and an environmental psychology study abroad course that focuses on culture, ecology and youth development in Tanzania. She is an instructor for the Croft Institute for International Studies, where she conducts workshops to prepare students for the cultural and psychological aspects of international study and research.

“This major award for Dr. Johnson is richly deserved,” said Glenn Hopkins, dean of the College of Liberal Arts. “She is an outstanding professor.”

Johnson will travel to Africa with her husband and two children. Her husband and son have visited the continent before and everyone is looking forward to returning, she said.

“It will give me fresh experiences to draw from in my teaching and mentoring,” Johnson said. “It will also give me a new database. I’m really trying to promote my students pursuing international research through Fulbright and other opportunities. There’s a huge movement in psychology to internationalize the curriculum. Hopefully I can get some of my students to come over there.”

Johnson is among approximately 1,100 U.S. faculty and professionals who will travel abroad through the Fulbright U.S. Scholar Program in 2012-2013. The program, established in 1946, is the flagship international exchange program sponsored by the U.S. government and has given about 300,000 students, scholars, teachers, artists and sciences the opportunity to conduct research and exchange ideas in more than 155 countries worldwide.

For more information on the Department of Psychology, go to https://www.olemiss.edu/depts/psychology. To learn more about the Fulbright Program, visit http://fulbright.state.gov.