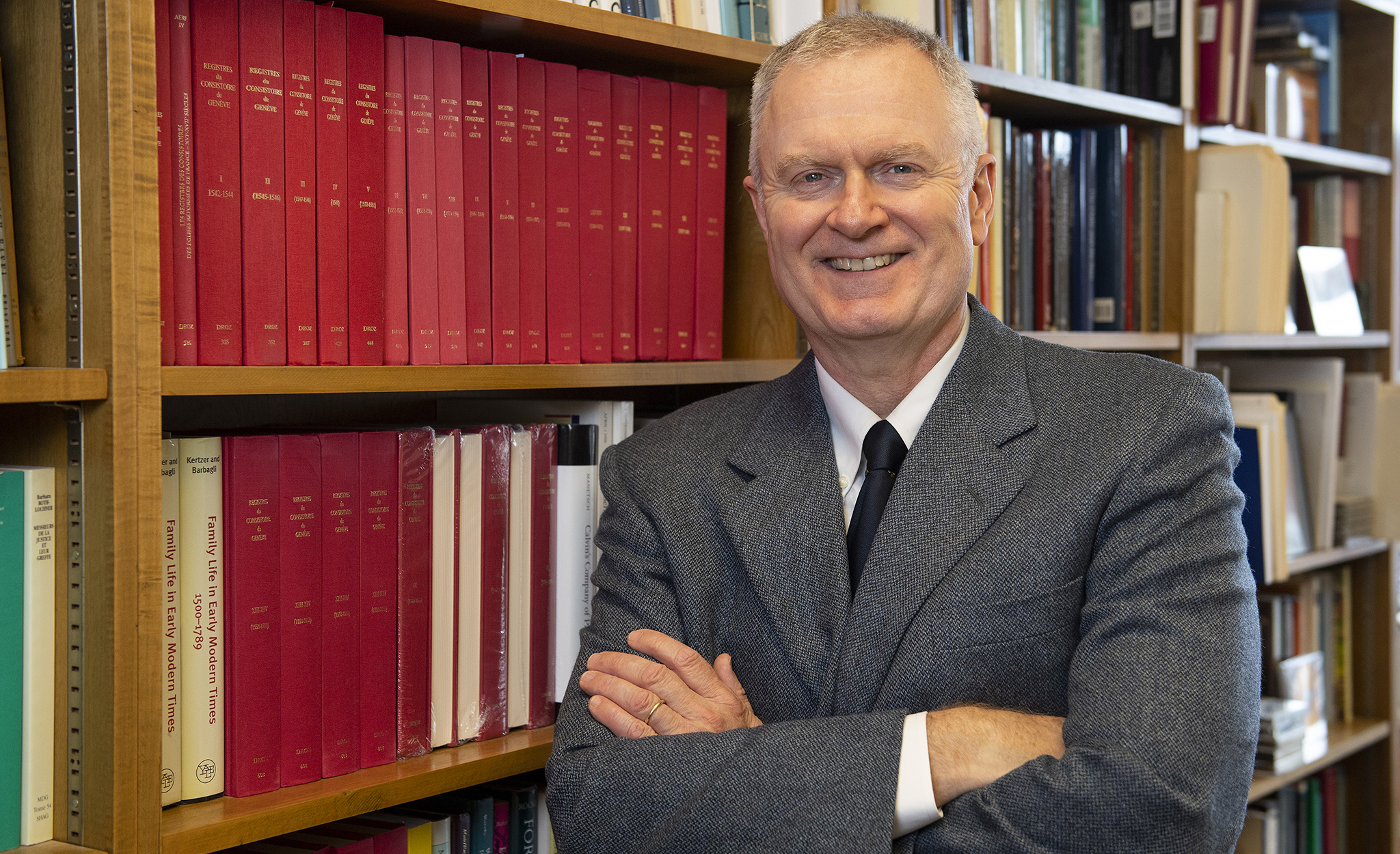 Jeffrey Watt, the university’s Kelly Gene Cook Sr. Professor of History, has been working to transcribe the records of Protestant reformer John Calvin concerning the Consistory of Geneva. He has received a grant to complete the massive project and plans to make printed copies and an online database available to researchers worldwide. Photo by Thomas Graning/Ole Miss Digital Imaging Services

University of Mississippi historian Jeffrey R. Watt has been working for 35 years to transcribe records kept by 16th century theologian John Calvin concerning the Consistory of Geneva. And thanks to two major grants to fund the painstaking work, he is closing in on the project’s completion.

The documents provide a glimpse into the history and practices of “Protestant Rome” and are thought to reveal insights into Calvin’s role as a pastor. For decades, historians have sought to turn the centuries-old, difficult-to-read manuscripts into a more legible version that would be readily available to scholars and the general public.

Watt, the university’s Kelly Gene Cook Sr. Professor of History, received a grant for the high-profile project from La Loterie Romande, which operates a lottery for the French-speaking region of Switzerland. The second grant came from an anonymous charitable institution in Geneva.

“Together, these two institutions are thus providing approximately $365,000 in funding,” Watt said. “Those funds should see us through the completion of the project.”

The transcription project began in 1987, when Watt was completing his doctorate in European history at the University of Wisconsin. The driving force behind its creation was Watt’s mentor, Robert Kingdon, one of the premier historians of the Reformation.

“Since its inception, I was involved primarily as a consultant, but I took over the leadership of this project after Professor Kingdon was incapacitated by a devastating stroke in 2008 and later passed away in 2010,” Watt said. “UM, accordingly, became the project’s home.”

Funding from Wisconsin ended shortly after Kingdon’s death, but Watt managed to keep the project going.

“The extraordinary international attention and funding for this work reflect Watt’s stature as one of the preeminent scholars working on the Reformation period,” said Noell Wilson, UM chair and associate professor of history.

“The history department celebrates his persistence and success in landing these grants, which will allow him to complete the decadeslong project of publishing the entirety of these records in both printed and open access form online so that they are accessible by as wide an audience as possible.” 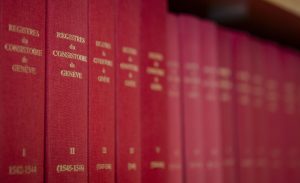 Printed editions of John Calvin’s Consistory of Geneva records line a bookshelf in Jeffrey Watt’s office in Bishop Hall. Watt is working to complete a decadeslong project to transcribe all the records. Photo by Thomas Graning/Ole Miss Digital Imaging Services

From the beginning, the goal of the project has been to make the consistory records available to a larger audience. This means publishing editions of the 21 volumes of registers that date from the ministry of Calvin, recognized as the most influential theologian of all forms of Reformed Protestantism, including the Presbyterian, Congregational and Reformed churches.

“Far less attention has been paid to Calvin’s role as pastor, even though his pastoral work was central to his Christian mission and consumed far more of his own time than did his work as a theologian,” Watt said. “Key to his role as pastor was the Consistory of Geneva.”

Under Calvin’s leadership, the small city-state of Geneva – today part of Switzerland –became the so-called Protestant Rome, center of the Reformation. Created and dominated by Calvin, the consistory was a quasi-tribunal entrusted with enforcing Reformed morality.

“It could admonish and excommunicate people but could not impose any secular penalties,” Watt said. “It did, however, refer many to the city council, which could impose a range of punishments.”

Calvinists put a special emphasis on discipline, and the consistory served as a model for similar institutions wherever Reformed Protestantism took hold. The records show the actual interaction between Calvin and the laity and the implementation of social discipline, arguably the most important social effect of the Protestant Reformation.

Though recognized as essential for promoting Calvinist religiosity and discipline among laymen, the consistory’s registers have scarcely been studied until recently because they are extremely difficult to read.

“Sixteenth-century French handwriting is generally hard to decipher, but the registers of the Consistory of Geneva are exceptionally challenging since the scribe was hurriedly trying to take down verbatim all that was said during the proceedings,” Watt said. “We have thus far published 16 of the 21 volumes. I have been director since the sixth volume.” 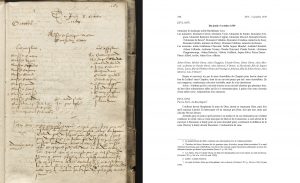 This page (left) in John Calvin’s Consistory records from volume 16, folio 185, is dated Oct. 5, 1559. The original French text was written by hand by a scribe at the proceedings. The published page from the transcription (right) also is in French.

Several people in Geneva became fans of Watt’s project and formed an ad hoc committee to find financial support for the work.

“Thanks to their efforts, we received this very generous funding, which will enable to see this project through to completion in the next five years,” he said. “The grants will be used to pay the salary for the remaining five volumes for my co-editor, Isabella Watt, who has been with the project since the beginning.”

The grants will also cover the costs of the project’s copy editor, a native French speaker; and of Sonia Vernhes Rappaz, a colleague in Geneva who will read final versions of each volume and offer suggestions for changes in the copious footnotes.

Funds also will cover the publication costs for the remaining five volumes and all previous volumes available, providing public access online for free.

Database Creation and Beyond

Over the years, Watt and company have developed a database that includes information on all people appearing before the consistory. This database is housed at Ole Miss, and to date includes entries for some 16,000 people.

Part of the funding will be used to give the database a major upgrade and to make it available online.

“The consistory’s efforts to promote Reformed values and moral discipline reverberated far beyond the walls of the Protestant Rome,” Watt said. “These volumes have already proved key sources for scholars of Reformation history.

“Publishing the editions of the remaining five volumes and open access to all 21 volumes will vastly increase their availability to scholars and amateurs alike.”