Jared Delcamp awarded $750,000 from the U.S. Department of Energy to continue work 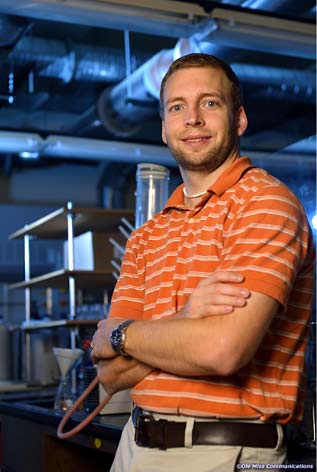 A highly selective $750,000 grant from the U.S. Department of Energy’s Office of Science will continue funding a University of Mississippi professor’s research into improving solar energy technologies.

Jared Delcamp, an assistant professor of chemistry and biochemistry, has been awarded the grant funding through the department’s prestigious Early Career Research Program.

The award will support Delcamp, along with a post-doctoral student and a graduate student, in their research to better understand how to use high-energy visible light efficiently in relation to solar energy.

Delcamp was among 84 scientists this year from across the nation – including 54 university researchers – to receive a research grant through the program, which is in its ninth year.

“It is very exciting to me to get an Early Career Research award,” said Delcamp, who joined the UM faculty in 2013. “The division it is coming from is full of the best solar energy researchers in the U.S.

“It is a fierce competition to become part of the group, and I’m honored to be a part of it. I’m excited to start contributing research progress to the division.”

The Early Career Research Program is designed to develop the individual research programs of outstanding scientists at universities and Department of Energy national laboratories early in their careers and stimulate research careers in the disciplines supported by the department’s Office of Science.

No more than 10 years can have passed between the year the principal investigator’s Ph.D. was awarded and the year of the deadline for the proposal. A native of Monticello, Kentucky, Delcamp graduated from the University of Illinois at Urbana-Champaign with his doctorate in chemistry in 2010.

Delcamp is the first UM faculty member to receive the award.

“We are so proud of Dr. Delcamp’s accomplishments at Ole Miss,” said Josh Gladden, UM interim vice chancellor for research and sponsored programs. “Early Career Research awards are extremely competitive and a true mark of a faculty member who has established themselves quickly on the national stage. Dr. Delcamp’s research has enormous potential, and we can’t wait to see what he will do next.”

With sunlight energy being wasted in the visible region just after the ultraviolet region in a lot of solar technologies, Delcamp’s research is studying ways to stop this loss. New discoveries in this field potentially could improve dramatically technologies used in the fields of solar cells, direct solar-to-fuel devices and solar-powered batteries.

The funding allows Delcamp to focus on training the best scientists possible while making important discoveries that are being recognized internationally, he said.

“We have been atypically successful in terms of funding,” Delcamp said. “We use our funding very carefully to ensure important experiments are being done and science is being progressed responsibly.

“This level of funding being used responsibly has allowed us to focus on how to best solve a science problem rather than a funding problem. This is incredibly freeing in terms of mentoring students and getting research done.”