VIDEO: Professor Sheds Light on Overlooked Artistic Side of Vikings 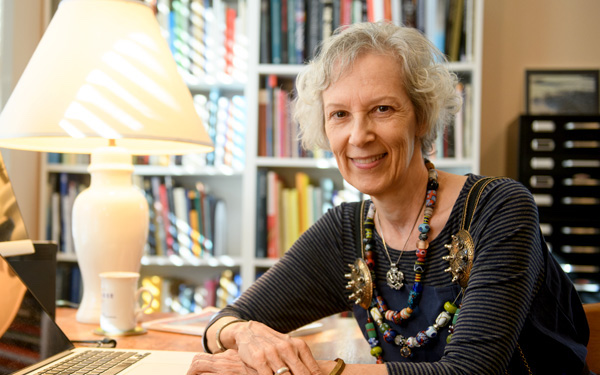 Nancy Wicker, UM professor of art history, is working to shed light on the artwork Vikings made, including pieces like the replica jewelry she is wearing. Photo by Robert Jordan/UM Communications

Vikings are often portrayed as brutish, violent Norse conquerors, but a University of Mississippi professor wants to shed light on the often-misunderstood peoples’ artistic side that led them to make intricate golden jewelry and impressive wooden carvings on the prows of their ships.

Nancy Wicker, a professor of art history, is involved in projects that aim to broaden what the world knows about the early Scandinavians, who continue to capture the public imagination through TV shows such as “Vikings.” She hopes to shift some of the focus from stereotypical characteristics to the art they made, as well as how they traveled like no group before them.

“I ask people who are interested in Vikings, ‘Do you know about Viking art?’” Wicker said. “They say, ‘Did they have art? They were a bunch of barbarians. Would they have had art?’ Of course they had art. All cultures produce art.”

Her goal is ambitious, given that the public’s basic understanding about the group is often oversimplified or just plain inaccurate. Even the iconic “Viking helmet” with horns protruding from the sides isn’t historically correct. They didn’t wear them. But, misperceptions aside, the public has a longstanding fascination with the Norse warriors and explorers.

“People are fascinated,” Wicker said. “We art historians and museum curators laugh about it. Everyone is interested in Vikings, mummies and dinosaurs. If museums have any of those three, they’re golden.”

During the 2016-17 academic year, Wicker was on sabbatical to write a book about art of the Viking Age. She was a fellow-in-residence at the National Humanities Center at Research Triangle Park, North Carolina. The experience provided her with access to some of the world’s best library collections and also gave her a work site very conducive to writing, she said.

She gave a public lecture there in April about Viking art, but the room full of scholars quickly shifted the discussions back to the darker aspects of folklore.

“The first question I got was, ‘What about the moral compass of the Vikings?’” Wicker said.

She’s committed to broadening understanding of the misunderstood group. Many people have a simplistic view of them that is mostly portrayed as violent.

Yet Vikings even produced art on their ships, which featured impressive carvings in their own distinctive style. They also made metal objects, most of them very small, featuring likenesses of various animals and people.

“You may have seen the Viking ship woodcarvings,” Wicker said. “They made the jewelry they wore. They had arm rings, neck rings and pendants. … You will see lots of animals, very, very abstracted animals on brooches and pendants that hold clothing together.”

Metal detecting is very popular and legal in Denmark and the United Kingdom.

There’s a TV show in the UK called “Detectorists” about hobbyists who hope to find treasure. The show may have boosted the popularity of the avocation.

Metal detecting also has led to new discoveries of Viking art that differs somewhat from what’s traditionally been uncovered in graves. 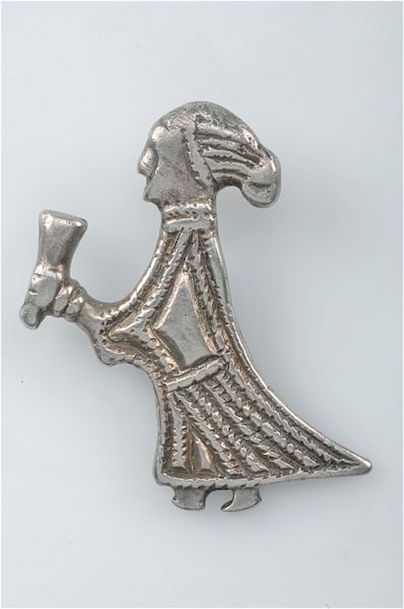 This small silver pendant, which is around an inch high, found in Sweden, is interpreted as a Valkyrie offering a cup of mead to welcome a fallen warrior to Valhalla, the hall of the slain, according to Norse mythology. Submitted photo by Creative Commons

“In addition to animal art, small figurines are now being found,” Wicker said. “My argument is that the newest discoveries of human figures are changing our view of Viking art. We can’t say it’s all just animal art.”

Besides their artistic endeavors, the great distances Vikings traveled for trade and exploration are worth scholarly treatment. They traveled from Scandinavia to Spain, North Africa and Italy, and in the other direction to Russia, the Black Sea, Istanbul, Greece and Baghdad, among other places, Wicker said.

“There are many theories about why they expanded,” she said. “They were already traveling before the Viking Age – not as far, not to Spain, not to Russia, but certainly across the Baltic and to England.

“They were already on the move, and there was a population boom. What do the second and third sons do when the first son inherits the farm?”

Around the eighth century, just before the beginning of the Viking Age, Scandinavians developed ships that were faster than the vessels that came before them due to use of sails, but they still had a shallow draw. The innovation enabled them to conquer both the seas and rivers with relative ease.

“The new ships were very adaptable, which really allowed them to be on the move and go all around the coast of France and Spain, and across the Atlantic to Greenland, North America and Newfoundland, as well as down the rivers of Russia,” Wicker said. “The development of ships is very important in the eighth century, just on the cusp of the Viking Age.”

Despite their creativity and nautical ingenuity, Vikings suffer from perceptions based on inaccuracies.

Many people who are most fascinated by the idea of pagan Nordic Vikings don’t realize that their world was multicultural. Vikings – both Christian and pagan – were in contact with Christians in Western Europe, Muslims and Jews in Spain, Slavs in Russia and Eastern Europe, and Byzantine leaders in Constantinople, as well as Turkic and Jewish groups in Central Asia.

These people also traveled to Scandinavia to trade and sometimes stay, as indicated by grave finds where Wicker excavated at Birka, in Sweden, for instance, she noted.

“The art of the Viking world fascinates me because it reflects these wide-ranging interactions,” Wicker said. “With my research, I want to show others how these diverse peoples influenced each other’s cultures.”

Wicker is also studying how pre-Viking gold jewelry reveals wear and breakage. She’s lending her expertise in this area to collaborate with Dr. Jason Griggs, associate dean for research in the School of Dentistry and professor and chair of the Department of Biomedical Materials Science at the University of Mississippi Medical Center.

Gold is an important metal in dental work because it is sturdy, malleable and noncorrosive.

She made impressions of jewelry breakage at the Swedish History Museum in Stockholm, and Griggs will analyze the fractal geometry of her impressions as part of his analysis of material fatigue and failure.

The department is fortunate to have Wicker, who has achieved national and international recognition, said Virginia Rougon Chavis, chair of the Department of Art and Art History and professor of art.

“To say that Dr. Wicker is actively engaged in scholarly activity would be an understatement,” Chavis said. “Dr. Wicker is not only interested in her own scholarship, but in the advancement of her field as a whole.

“She is well-connected across the globe with other members at the top of her field. She has been an essential collaborator on various projects and is one of the most rigorous of colleagues I have known. She is a truly devoted scholar, and it is an honor to have her as a member of our faculty.”