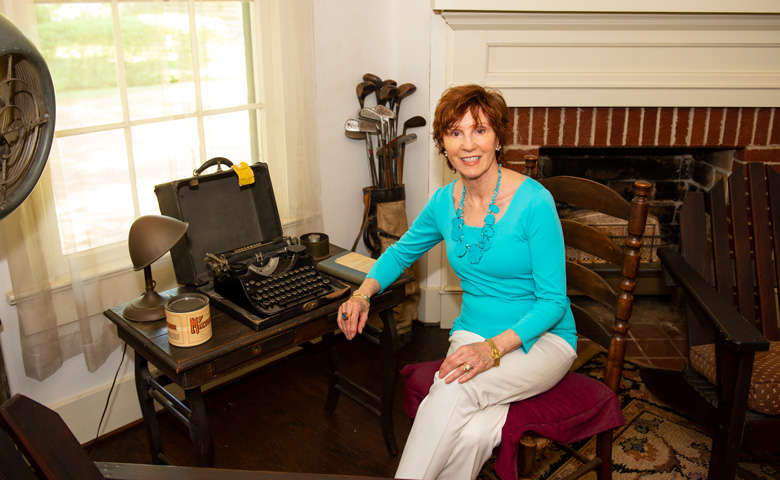 Sandy Black sits in the office of William Faulkner’s home.

William Faulkner’s desk, typewriter and resting bed are fixtures in the office of the late Nobel Prize-winning author’s Oxford, Mississippi, home. Peering in, it’s easy to imagine the writer, pipe in hand, contemplating his next sentence.

Now, one of his biggest fans is preserving that ambiance.

“I can’t imagine that the university didn’t already own all of this furniture and it was just a shock to me that it could leave, that they could just pick it up in a truck and take it away. I had no idea,” said Sandra Miller Black of Madison, Mississippi, whose recent $500,000 gift helped the University of Mississippi ensure that all of Faulkner’s furnishings would remain in the home.

Faulkner’s house, outbuildings and land, affectionately named Rowan Oak by the author himself in 1931, were purchased by the university in 1974 and added to its University Museum and Historic Houses. But all furnishings remained the property of Faulkner’s extended family.

“My husband has been very generous in giving me monthly allowances. With these, I bought the children’s birthday gifts, household supplies and paid some bills, that kind of thing,” said Black, who is married to John Black, a UM Foundation board member.

“But I always had a nice amount left over and I invested it early on in Apple, Google and Amazon. It grew and grew, and I was able to accumulate enough money to be able to make this gift.”

Black was inspired to affix Faulkner’s furniture to his home in perpetuity by Interim Chancellor Larry Sparks who told her of the need. So his request plus her longtime love of the author’s work and home were a good fit.

“We are so grateful to Sandy for her gift which will ensure that generations of Faulkner fans continue to visit Rowan Oak and be able enjoy his historic home in its entirety,” Sparks said. “This is good for Rowan Oak and it’s good for Ole Miss, Oxford and the state of Mississippi.”

Black fell in love with Faulkner’s home in 1989 when she and a group of friends began attending the Faulkner and Yoknapatawpha conference — a celebration of the author’s work that draws hundreds of visitors to Oxford, Mississippi, from all over the world. Annually, Rowan Oak draws upwards of 60,000 visitors to its house and grounds from all 50 states and more than 50 foreign countries.

“We had a fabulous time,” Black said. “We did everything. We went to Bailey’s woods and had the picnics and, of course, the discussions and seminars were spectacular. We all were English majors so we really enjoyed that and being together.”

Black never met Faulkner. She saw him shopping once when she was a student at Ole Miss but feels she knows him through his stream-of-consciousness writing style. Of all his books, some of which she has read several times, her favorites are “Absalom Absalom,” “Go Down Moses” and the Snopes trilogy.

“I love his work. It seems to me that he writes like all of us think. It’s spidery and it goes off in all sorts of directions at the same time,” said Black, who has lectured on Faulkner to freshman English students at Holmes Junior College in Jackson, Mississippi.

Sandy met her husband, John Black, at a fraternity rush party at Ole Miss. He earned a bachelor’s degree in mathematics from Ole Miss in 1961 and a master’s degree in accountancy in 1962. In college, he was a Taylor Medalist and member of Omicron Delta Kappa academic honorary and Phi Delta Theta fraternity. They were married in 1963 and have three adult children and eight grandchildren.

Sandy Black said, in addition to reading books by Faulkner and J.R.R. Tolkien, she enjoys gardening, cooking, playing bridge and collecting regional art. Most recently, the couple has helped their son, Johnny Black, campaign for a seat in the Mississippi House of Representatives.

In 2015, the Blacks made an $11 million gift to the University of Mississippi Medical Center, the largest private gift received by UMMC in a single year on record. Since then, the Blacks also made a major gift to renovate the guest house at the chancellor’s home on campus and they consistently support Ole Miss Athletics.

“We couldn’t be more thrilled with Sandy’s gift to the university and we greatly appreciate her vision in desiring that future generations of Faulkner fans fall in love with Rowan Oak as she has,” said Robert Saarnio, director of the University Museum and Historic Houses.

Curator Bill Griffith agreed: “Rowan Oak without its furniture would simply be Faulkner’s house. Thanks to Sandy Black, the property will remain his home.”

Home to Faulkner and his family for over 40 years, Rowan Oak was originally built in 1844, and stands on over 29 acres of land just south of the Square and campus in Oxford. The house is open most days and the grounds are open year-round, from dawn to dusk. There’s no fee to visit the grounds, but admission to tour the house is $5 cash.

For information on supporting culture and arts at Ole Miss, contact Rob Jolly, development officer, at 662-915-3085 or jolly@olemiss.edu. To make a gift, visit give.olemiss.edu.