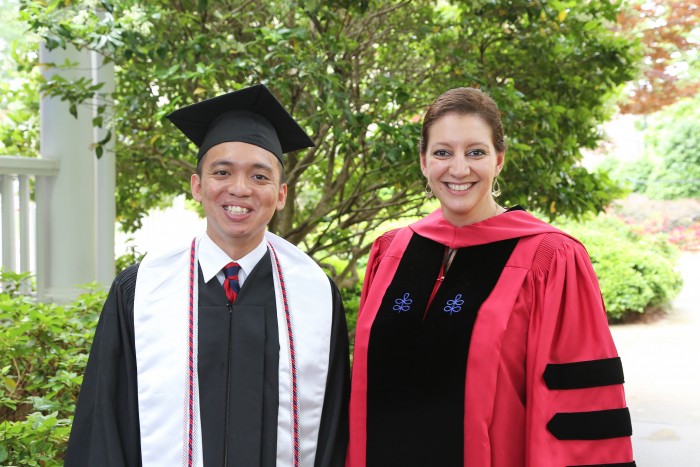 Amir Aziz and his thesis advisor, Vivian Ibrahim, Croft associate professor of history and international studies. “His thesis is a huge contribution to the field as it deals with Algeria, a country often ignored in the context of the Middle East,” Dr. Ibrahim said.

Most students graduate from college when they are 21 or 22. For Amir Aziz, that’s when he began college as a member of the Sally McDonnell Barksdale Honors College and the Croft Institute for International Studies at the University of Mississippi. Of course, not many UM students serve in the Singapore Armed Forces before beginning their college careers.

While fulfilling his duty to his country, Aziz saw the movie The Blind Side which is what led him to consider the University of Mississippi.

“I would have never heard of the university if I hadn’t,” Aziz said, “because in Singapore, people kept telling me to apply to Ivy League institutions. … I hadn’t really considered going to a public university until I looked up Ole Miss on the Internet. I was looking for a school that had a top-ranked honors program and that offered international studies and Arabic as majors, and I discovered Ole Miss had it all. I applied, received my acceptance at Croft along with the Donald S. Pichitino Scholarship (from the Honors College) and packed my bags for Mississippi, even though I knew little about the state. It has been four years since then, and I have not looked back! I have enjoyed every moment in Oxford and forged long-lasting connections with people there.”

Aziz double majored in international studies and French with a minor in Arabic. In addition, he was installed as a member of Phi Beta Kappa and was chosen to receive a Taylor Medal. For his thesis, “Al-Arabiyyah, Le Français, and the Soul of Algeria: The Language Tango between Arabic and French in Algerian Education Policy and Defining Post-Colonial Algerian National Identity,” Amir used both Arabic- and French-language sources and conducted surveys in both languages with young people in Algeria. It was selected as the best thesis in the Middle East region by the Croft Institute.

“Amir’s thesis was a unique and important contribution to several fields, not least Middle Eastern and European Studies,” said Vivian Ibrahim, a Croft associate professor of Middle Eastern history who taught Aziz in several classes at UM and advised his Croft Institute-Honors College thesis. She called Aziz “one of the very strongest students” in his classes.

For his thesis, Aziz examined Algeria’s language policy and its impact on the education system, a daunting topic because Algeria is a difficult place to conduct field work and find reliable sources. However, Aziz was persistent, Ibrahim said.

“Even as an undergraduate with limited research time, Amir found ways to unearth the information and present a truly comprehensive picture,” she said. “Utilizing his excellent command of both Arabic and French, Amir conducted fieldwork interviewing over 200 Algerian youths in the capital city, Algiers, over the winter break of 2014. He presented a complex picture of how the Algerian government’s policy of Arabisation has led an education system in flux.

“Overall, he displayed the deep commitment to serious research that we wish all our students had. He did not settle for easy or partial answers. Add to this his attention to detail and his ability to join disparate pieces of evidence into one line of argument, and it becomes clear that Amir is exceptional.”

Soon after, the Honors College nominated Aziz for the Portz Scholarship, an award given by the National Collegiate Honors Council (NCHC) to only four honors students nationwide each year. In August, Aziz learned that he had won and will be presenting his thesis at the 2015 National Conference of NCHC, which will be held in Chicago, Illinois, in November.

Aziz has fond memories of his time at the University of Mississippi.

“I always looked forward to taking Honors College classes each semester. The highlights of my college career have taken place in honors classes with some of my most favorite professors: Dr. Ann Fisher-Wirth in the Honors American literature survey, Dr. Robert Brown in Honors 101, and Dr. Donald Dyer in Honors Conversations. The Honors College is like a second home to me.”

Aziz has begun doctoral work in French at the University of Texas at Austin. His concentration will be in international law and human rights, with the goal of having a career at the United Nations.

He is the second Croft graduate to with a Portz Scholarship in the last five years. The other is Ryan Parsons, who won in 2011, and, after a earning a master’s degree in development studies from the University of Cambridge and working as the program coordinator for the McLean Institute for Public Service and Community Engagement at the University of Mississippi, is now pursuing a PhD in sociology at Princeton University.