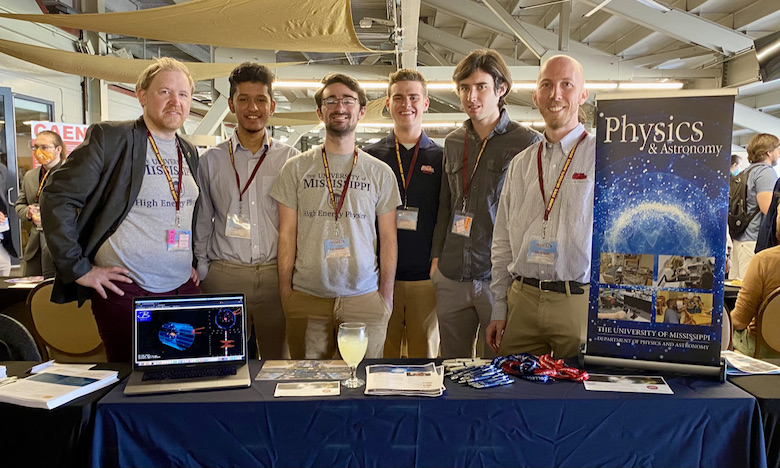 Paul Gebeline is a senior from Kiln with double majors in mathematics and physics at the University of Mississippi.

Gebeline examines the lifetime of a particle called the Xi_c+ using simulations from the Belle II experiment. 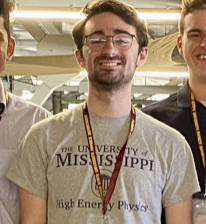 I had a really good high school teacher. A good teacher can make you love any subject. Before having him I wanted to be a nurse!

Physics is hard. I’m also double majoring in mathematics, so having 18 hours of advanced math/physics class, teaching an intro physics lab, and research, it can all get overwhelming. But my classes are (mostly) fascinating, as is my research, so that’s motivated me to press on. It’s hard, but it’s fun, so it’s worth it!

“I was very lucky to get into research freshman year because I had my advisor as a professor for intro physics, and he likes to talk about his research. I found it interesting and asked to get involved, and I’ve been working with him for four years,” he said.

“I have learned post-graduate level physics as an undergraduate, learned how to present—a very valuable skill in physics academia, and learned how to conduct academic research in general. Research has brought me connections with professors/researchers from other schools and invaluable skills that make me an asset to any grad school program. And finally, after a few more months of work, I can have a Physical Review Letters published paper before I’m even a graduate student, which is incredible!”

I want to be a professor, the same kind that made me love physics. I can teach a cool subject but also do my best to make sure students have that one cool teacher that they respect, because that’s very important in an educational environment.