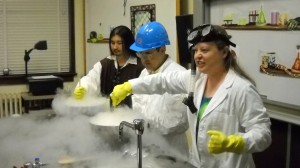 Faculty and staff members in the Department of Physics and Astronomy use liquid nitrogen to freeze ice cream for guests at last year’s ‘Spooky Demonstrations’ night.

Frights, food and fun are bound to be plentiful Oct. 27 at the University of Mississippi as the Department of Physics and Astronomy presents its annual “Spooky Demonstrations.”

The popular event, in its sixth year, highlights waves, electricity and magnetism. It begins at 7 p.m. in Lewis Hall and is free and open to the public.

“We will do a series of physics demonstrations related somehow with Halloween,” said Marco Cavaglia, professor of physics and coordinator for the evening’s activities. “In addition to the physics, we’ll prepare ice cream with liquid nitrogen and give prizes for the most original, most scary and cutest costumes to kids 12 and under.”

Scheduled demonstrations include freezing objects in liquid nitrogen (at minus 300 degrees Fahrenheit), generating sound waves (with Bunsen burners and tubes), observing cosmic rays with a cloud chamber, levitating magnets with superconductors and launching bottle rockets. Other activities include optical illusions with mirrors, a Van de Graaff generator (a literally “hair-raising” electrical device), a bed of nails and other contraptions, he added.

The event is an expansion of the department’s monthly open houses, Cavaglia said.

“A lot of people usually come to the astronomy nights and some of them asked us if we were going to do more public events,” he said. “We thought that Halloween could be a good opportunity to do some ‘spooky’ demos. Last year, we had more than 200 visitors. Our graduate and undergraduate physics students are really enthusiastic about participating.”

For more information about the Department of Physics and Astronomy, call 662-915-5325.