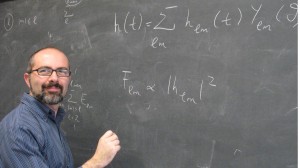 A global team of scientists, including a University of Mississippi physicist, has determined the best constraint on the mass of photons so far, using observations of super-massive black holes.

The research findings appear in the September issue of Physical Review Letters, one of the most prestigious, peer-reviewed academic journals in the field. “Black hole bombs and photon mass bounds” is co-authored by Emanuele Berti, UM assistant professor of physics and astronomy, along with fellow researchers Paolo Pani, Vitor Cardoso, Leonardo Gualtieri and Akihiro Ishibashi.

PRL is among several publications produced by the American Physical Society and American Institute of Physics describing selected physics research papers to a broad audience of physicists, journalists, students and the public. This paper details how the scientists, who work in Portugal, Italy, Japan and the U.S., found a way to use astrophysical observations to test a fundamental aspect of the Standard Model – namely, that photons have no mass – better than anyone before.

“The test works like this: if photons had a mass, they would trigger an instability that would spin down all black holes in the universe,” Berti said. “But astronomers tell us that the gigantic, super-massive black holes at galactic centers are spinning, so this instability cannot be too strong.

“The mass of the photon, if it has a mass at all, must be extremely tiny.”

“Ultralight photons with nonzero mass would produce a ‘black hole bomb’: a strong instability that would extract energy from the black hole very quickly,” said Pani, the paper’s lead author. “The very existence of such particles is constrained by the observation of spinning black holes. With this technique, we have succeeded in constraining the mass of the photon to unprecedented levels: the mass must be one hundred billion of billions times smaller than the present constraint on the neutrino mass, which is about two electron-volts.”

The results of this study can be used to investigate the existence of new particles, such as those possibly contributing to the dark matter that is the subject of a search using the Large Hadron Collider at CERN in Geneva. CERN is the site where the breakthrough discovery of the Higgs boson was reported earlier this year.

“That discovery filled one of the most important gaps in our understanding of the standard model of particle physics, because it explains how particles get their mass,” Gualtieri said. “However, not all particles have mass. Physics makes progress by testing every nook and cranny of our commonly accepted theories. So, if we believe that a particle has no mass, we’d better test this idea with precise experiments.

“Observations of super-massive black holes may provide new insights which are not accessible in laboratory experiments. This would certainly be exciting. Perhaps these new frontiers in astrophysics will give us a clearer understanding of the microscopic universe.”

“Paolo, Vitor, Leonardo and I are all part of an IRSES Network on ‘Numerical Relativity and High-Energy Physics’ funded by the European Union,” Berti said. “Paolo presented a talk on this work at the first meeting of our network that was held in Aveiro, Portugal in July. This network will be used in the next four years to strengthen our collaboration even further.”

Pani, who received the Fubini Prize from the Italian National Institute of Nuclear Physics for the best Ph.D. thesis nationwide in 2011, is a post-doctoral researcher at Instituto Superior Técnico in Lisbon, Portugal, supported by a European Marie Curie Fellowship.

“Paolo started working with us when he visited Ole Miss in 2007,” Berti said. “We have been working together on this particular project since January 2012, and we have co-authored nine papers so far.” 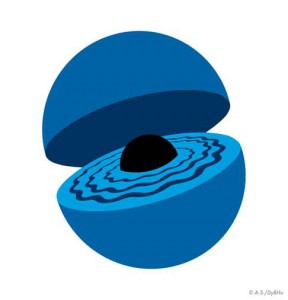 Schematic illustration of the ‘black hole bomb’ effect. A wave thrown at a black hole can be magnified upon reflection, extracting rotational energy and spinning down the black hole. The mass of the particle acts like a ‘wall’ for outgoing waves (represented by the enclosing sphere in this figure), so the reflection/amplification process is repeated and causes an instability. Illustration by Ana Sousa.

A post-doctorate researcher at UM before returning to his native Portugal, Cardoso is a professor at Instituto Superior Tecnico, where his group is supported by a prestigious European Research Council Starting Grant. Cardoso and Berti have published 37 papers together over the past decade.

“Gualtieri and I were both Ph.D. students under the supervision of Valeria Ferrari in Rome, Italy,” Berti said. “We have also been collaborating for more than a decade. Leonardo is now a research professor (‘ricercatore’) in Rome.”

Ishibashi works at the KEK Theory Center and at the Department of Physics of Kinki University in Japan, where physicists at the center are studying in great depth phenomena similar to the one described in the PRL paper.

A New Scientist article featuring their work is at
http://www.newscientist.com/article/mg21528824.100-heavy-photons-are-too-light-to-be-behind-dark-matter.html.