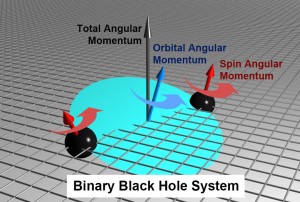 A global team of scientists, including a University of Mississippi physicist, provides new insight about the most energetic event in the universe: the merging of two spinning, orbiting black holes into a larger black hole. 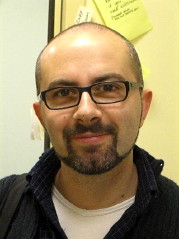 The research findings by Emanuele Berti, associate professor of physics and astronomy, and his colleagues appear in the March issue of Physical Review Letters, one of the most prestigious peer-reviewed academic journals in the field. “Effective potentials and morphological transitions for binary black-hole spin precession” is co-authored by scientists Michael Kesden, Davide Gerosa, Richard O’Shaughnessy and Ulrich Sperhake.

PRL is among several publications produced by the American Physical Society and American Institute of Physics describing selected physics research papers to a broad audience of physicists, journalists, students and the public. This paper details how the scientists, who work in the United Kingdom and the U.S., explored the influence of black hole spins on the dynamics of black hole mergers.

“The work should have significant impact upon our understanding of how black holes are born, live and die, and also on the search for gravitational waves in the cosmos,” Berti said.

Albert Einstein’s theory of general relativity predicts that two massive objects in a binary system should move closer and closer together as the systems emit a type of radiation called gravitational waves. Using gravitational waves as an observational tool, researchers could learn about the characteristics of the black holes that were emitting those waves billions of years ago, such as their masses and mass ratios. That data is important to more fully understanding the evolution and nature of stars and black holes.

This year, a large-scale physics experiment called the Laser Interferometer Gravitational-wave Observatory aims to be the first to directly detect gravitational waves. LIGO is the largest physics project funded by the National Science Foundation.

“The equations that we solved will help predict the characteristics of the gravitational waves that LIGO would expect to see from binary black hole mergers,” Kesden said. “We’re looking forward to comparing our solutions to the data that LIGO collects.”

“In a binary black hole system, the directions of the individual types of angular momenta change, or precess, over time,” Sperhake said.

“In these systems, you have all three angular momenta, all changing direction in time,” Kesden said. “The solutions that we have now describe the shapes that are traced out by the precessing spins of these black holes.”
In addition to solving existing equations, the researchers also derived equations that will allow scientists to statistically track binary black hole spin precession from the formation of black holes to their merger far more efficiently and quickly than has been possible.

“With these solutions, we can create computer simulations that follow black hole evolution over billions of years,” Kesden said. “A simulation that previously would have taken years can now be done in seconds. But it’s not just faster; there are things that we can learn from these simulations that we just couldn’t learn any other way.”

Berti earned his doctorate at the University of Rome in Italy. He later worked in Greece, France and the U.S. before moving to UM, where he is an associate professor. He is also a visiting associate professor at the California Institute of Technology and the recipient of a highly competitive CAREER Award from the National Science Foundation. His research interests include theoretical astrophysics and relativity, black holes, neutron stars, gravitational wave emission and detection and experimental tests of Einstein’s general relativity theory.

Kesden earned his doctorate in physics from the California Institute of Technology. He is an assistant professor of physics at the University of Texas at Dallas and recipient of a 2015 Sloan Research Fellowship. These prestigious fellowships recognize the most promising scientific researchers for their achievements and potential among the next generation of scientific leaders in the U.S. and Canada.

Sperhake is a lecturer at the Department of Applied Mathematics and Theoretical Physics of the University of Cambridge, an adjunct professor of physics at UM and a visiting associate professor at the California Institute of Technology.

Gerosa was a summer student at the California Institute of Technology, a visiting student at UM and a Master’s student in Milan (Italy) under Berti’s supervision. He was awarded an Isaac Newton Studentship and he is a doctoral student working under Sperhake’s supervision in Cambridge. In February, Gerosa got a prize for the best poster at the conference “Compact Objects as Astrophysical and Gravitational Probes” for work based on this paper.

O’Shaughnessy is an assistant professor at the Rochester Institute of Technology and a member of the LIGO Scientific Collaboration.