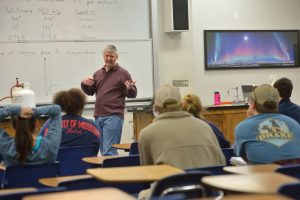 Approaches used in the discovery of new subatomic particles is the topic for a monthly public science forum organized by the University of Mississippi Department of Physics and Astronomy.

The spring semester’s final meeting of the Oxford Science Café is set for 6 p.m. April 26 at Lusa Bakery Bistro and Bar, 1120 North Lamar Blvd. Breese Quinn, UM associate professor of physics and astronomy, will discuss “Particle Physics: The Sledgehammer and the Tweezer.” Admission is free.

“Particle physics is the field of research that seeks to discover and understand the most fundamental building blocks of the universe, and how they interact to form everything around us,” Quinn said. “One way to do this type of research is using the biggest machines in the world to smash particles together as hard as possible, and see what new comes out.”

Quinn’s 40-minute presentation will include discussions of the discovery of the Higgs boson to examine this sledgehammer approach.

“Another method is using very sensitive tools to make high-precision measurements of extremely rare processes,” he said. “An introduction to the new Muon g-2 experiment will demonstrate this ‘tweezer approach.’ We will discuss Ole Miss’ role in both of these efforts, as well as why it all matters.”

Quinn has been involved in particle physics research at the U.S. Department of Energy Fermilab for more than 23 years, since he was a graduate student at the University of Chicago. Recently, his UM group was part of the analysis team that reported the first evidence for the Higgs boson particle.

One of the first recipients of Fermilab’s new Intensity Frontier Fellowship, Quinn helped design a new Fermilab experiment that should help explain the matter-antimatter asymmetry in the universe.