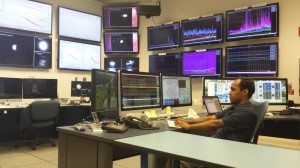 The September Science Cafe’ is set for Sept. 23.

The origins of the universe is the topic for a monthly public science forum organized by the UM Department of Physics and Astronomy.

The fall semester’s second meeting of the Oxford Science Café is set for 6 p.m. Sept. 23 at Lusa Pastry Café, 2305 West Jackson Ave. Shivaraj Kandhasamy, a UM postdoctoral research associate working at the Laser Interferometer Gravitational-wave Observatory, or LIGO, facility in Louisiana, will discuss “The Big Bang and Its Cosmic Messengers.” Admission is free.

“If the universe started with a big bang, traces of the primordial explosion should be observed in the form of electromagnetic radiation, gravitational waves and neutrinos across the sky,” Kandhasamy said. “The next generation of gravitational wave ground- or space-based detectors may directly detect these gravitational waves.”

Kandhasamy’s 30-minute presentation will review the beginning of the universe’s expansion, or “explosion,” often called the big bang.

“In 1929, Edwin Hubble discovered that most of the galaxies are receding with velocities proportional to their distances from the Milky Way,” he said. “This observation suggests that the universe was once very small in size and has expanded ever since.

“The cosmic (microwave) background of electromagnetic radiation was first observed by Penzias and Wilson in 1964. Recently, the BICEP2 experiment reported some indirect evidence for the presence of cosmological primordial gravitational waves.”

Kandhasamy earned his doctorate in physics from the University of Minnesota, master’s from Indian Institute of Science in Bangalore, India, and bachelor’s from the Vivekananda College of MK University in Madurai, India.

For more information about the Department of Physics and Astronomy, visit call 662-915-5311.