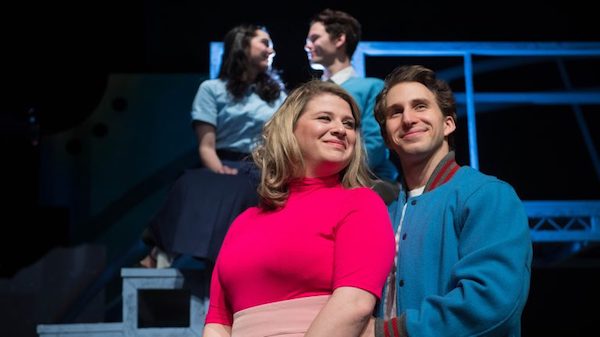 Zombies are roaming about campus at the University of Mississippi, but rather than seeking out human prey, these ghouls are singing and dancing.

The Ole Miss Theatre production of “Zombie Prom,” the third production of the year, opens at 7:30 p.m. Friday (Feb. 16) in Meek Hall Auditorium. The show runs through Feb. 25. Tickets, priced at $20 apiece, are available through the Ole Miss Box Office in the Gertrude C. Ford Center for the Performing Arts or online at https://olemissboxoffice.com/.

“Zombie Prom” is set during the atomic bomb scare of the 1950s. Senior Josh McLemore, a musical theatre major who has appeared in 10 plays since his freshman year, stars as Jonny Warner, the show’s lead character.

‘”Zombie Prom,’ a musical about teen love in the 1950s and what it takes to accept someone for who they are, sounds more poetic than it actually is,” McLemore said. “My character, Jonny Warner, is a bad-boy, greaser type, who has fallen in love with Toffee.

“Jonny grew up an orphan, and to him, Toffee is the only person in his life who has ever loved him, so things get interesting when her parents force her to break up with him.”

Sophomore business and theater major Ginnie Brown plays the role of Candy. Brown has appeared in one other Ole Miss Theatre production and knows what goes into pulling off a production of this size.

“It definitely takes a village to put up a show!” Brown said. “For example, in ‘Zombie Prom,’ we have 10 cast members, nine understudies, a director, three assistant directors, a stage manager and four assistant stage managers.

“That’s 28 people, and there is probably the same amount, if not more, (of) designers and crew members.”

To prepare for the opening, the cast began rehearsing two weeks before the start of spring semester. The cast rehearses six days a week for three hours, with rehearsals overseen by director Rene Pulliam.

The Department of Theatre Arts has 13 full-time faculty members. Although the success of a production depends mostly on the cast and crew, productions would not run as smoothly without the department’s faculty.

“I think casting is definitely a huge part of the production and probably sways how some things are going to be put into motion,” McLemore said. “However, the faculty works really hard and schedules design, concept and production meetings before and throughout the rehearsal process.

“They determine how everything will be built, paid for, designed, and discuss the themes of the show. Those meetings are really what make the production come to life, not the casting, in my opinion.”

Ole Miss Theatre opens auditions to the entire student body as well as the Oxford community. However, theater majors always participate in a production in some manner.

Brandon Skaggs, project coordinator for the production department, shared what goes on behind the scenes.

“A lot of the students in our department help out with the productions, whether with props, costumes, scenes or ushering at the different performances,” Skaggs said. “Students within the department create a lot of the costumes and sets that are used in the show.

“We actually have a scene shop in the back of Fulton Chapel where students can get hands-on experience building sets.”

Each season, the Department of Theatre Arts puts on four productions, two per semester. Courses in the department touch on areas of musical theater, acting, costume and set design, lighting, sound design, dancing, and cinema production and acting.

“Ole Miss’ theater department is very professional,” Brown said. “We follow the same structures and guidelines as set by Actors’ Equity, which hundreds of actors and stage managers are part of on Broadway and throughout professional performance groups.

“It definitely is preparing all of us within the department for the real world of working in theatre after we graduate.”

For more information about dates and times for “Zombie Prom” or future productions, visit http://theatre.olemiss.edu/index.html.