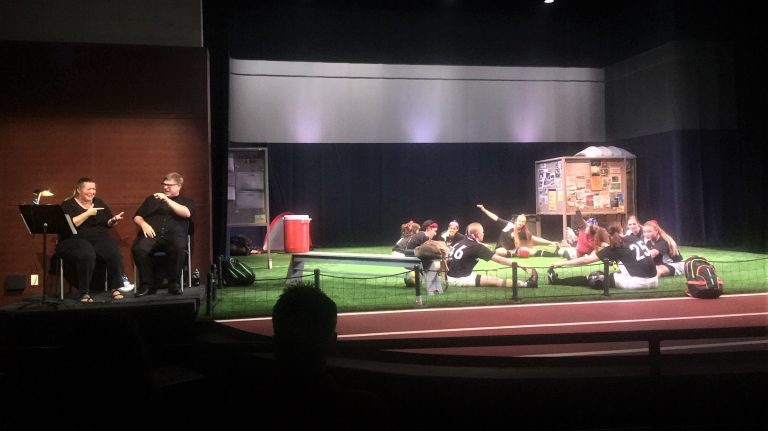 Summer Chappell (left), access services coordinator and interpreter for the UM Office of Student Disability Services, and Corey Blount, the office’s assistant director, provide American Sign Language interpretation for a performance of ‘The Wolves’ in Meek Auditorium earlier this fall. The Ole Miss Department of Theatre and Film is offering ASL interpretation for each of its productions this season. Photo by Katherine Stewart/Department of Theatre and Film

At a recent Saturday matinee performance of “The Wolves,” the University of Mississippi Department of Theatre and Film’s first production of its 2019-20 season, audience members settling into Meek Auditorium probably noticed two people seated on a platform just off the left side of the stage.

Many likely assumed that the black-clad figures were a regular part of the performance; for some audience members, however, they were the most important part. As the play began, their hands described the action on the stage in elegant gestures while their faces provided emotional context with exaggerated expressions.

The two American Sign Language interpreters, Corey Blount and Summer Chappell, work for the university’s Office of Student Disability Services – Blount as assistant director and Chappell as access services coordinator and interpreter – and both provide interpreting services in a variety of academic settings on campus.

But this was the first time for either of them to interpret a live theater performance at Ole Miss.

“I think it’s incredible,” said Stacey Reycraft, SDS director. “We have not had interpreted performances at the university before.”

A professional company in Memphis – Hattiloo Theatre – offers a full season of interpreted performances but Reycraft said she couldn’t think of another university in Mississippi that does so.

According to the U.S. Census Bureau’s American Community Survey of 2017, an estimated 4.1 percent of Mississippi’s 2.5 million residents – some 119,000 people – live with a form of hearing loss. And while the other 96 percent of the population are happily enjoying concerts, festivals and other live events, Mississippi residents who are deaf or hard-of-hearing face limited options.

“There are some entertainments in Mississippi for deaf people, but of course, we all want more,” Benjamin Wagenknecht, director of the state Office on Deaf and Hard of Hearing, wrote in an email. The ODHH is an outreach and advocacy arm of the Mississippi Department of Rehabilitation Services that provides education and training and maintains the state-mandated ASL interpreter registry.

“We deaf people are human beings who enjoy everything that people who have the ability to hear do,” Wagenknecht wrote.

“We are no different in loving live theater performances – we want to be a part of the whole of pop culture. The only difference is the ability to hear. People forget that we are very visual, and theater is perfect for us.”

While the 1990 Americans with Disabilities Act requires movie theaters and other public venues to make films accessible by providing enhanced audio technology and captioning devices, there is no such requirement for live events.

Opening Ole Miss Theatre performances to a wider audience – despite not being required to do so – is a no-brainer, said Michael Barnett, associate professor and chair of the Department of Theatre and Film.

“Diversity and inclusivity are core values of the theater broadly and of our department,” Barnett said. “It just makes sense.”

Barnett has experience with theater for the deaf, having worked with Faction of Fools, the commedia dell’arte company that performs in residence at Gallaudet University in Washington, D.C. Gallaudet is one of the only institutions of higher learning that provides specialized communication accommodations for people who are deaf and hard-of-hearing, and Faction of Fools provides interpreters and captioning at several performances of each production.

When the department began looking into ways to make theater performances more accessible, the addition of ASL interpreters was initially chosen over captioning services because they would provide a more engaging experience for audience members who need the service.

“With interpreters, they’re on the stage along with the performers, so people don’t have to look away from the performance to a screen,” Barnett said.

After the first interpreted performance, of the play “The Wolves,” which took place Sept. 26, Barnett decided to add captioning for audience members who are hard of hearing but are not fluent in ASL, such as Oxford’s older residents who are experiencing age-related hearing loss.

Captioning also benefits international students with limited proficiency in spoken English who might have difficulty following fast-paced dialogue, and it provides more access to English language learners and individuals with auditory processing disorders and other receptive language disorders.

“It’s simply the most inclusive thing to do,” Barnett said.

Wagenknecht noted that feeling included is important to the deaf and hard-of-hearing community. So did Kristopher Colvin, a senior education major from Olive Branch who has been deaf since he was 6 months old. ASL is his primary language.

Colvin attended the interpreted performance on Sept. 26 and said via email that while he enjoys many kinds of on-campus programming – sporting events, news, politics and so on – he would like to see more events providing captioning and interpretation so that the deaf will feel welcomed along with hearing people in the university community.

“ASL interpreted performances will be of great value to the UM community, because they show the deaf community that they are valuable at UM,” Colvin wrote.

Making live theater accessible to people who are deaf or hard of hearing benefits people outside that community as well. Micaela Kostmayer, a senior pursuing a bachelor’s degree in theatre arts, is one of many UM students who have taken the full course of ASL classes offered on campus.

When Kostmayer learned that the department would be offering interpreted performances, she vowed to attend only those specific shows.

“I love the idea of doing that here, especially because it’s not really an option anywhere in Mississippi that I know of,” Kostmayer said.

“I love theater and I have really loved the deaf community that I have been able to interact with and talk to. I think it’s absolutely incredible that these two communities can interact with each other, because they’ve never really been able to here before.”

Kostmayer became captivated with ASL after seeing Deaf West‘s production of “Spring Awakening” on Broadway several years ago. Deaf West is a California-based theater company that weaves ASL and spoken English together in every performance.

“It literally changed my life,” Kostmayer said. “I fell in love with it, went to college the following year, and that summer I started taking ASL on campus.”

Kostmayer had an opportunity to put her new language skills to good use in spring 2018 while participating in the Disney College Program, working as an attraction cast member at Toy Story Land.

“Our ride had gone down, and there was a deaf person there but her interpreter was somewhere else with her family,” Kostmayer explained.

“She had no idea what was going on, and I was the only cast member in the area who knew even a little bit of sign language. That was probably the best experience in my entire program – realizing that there was an accessibility issue and being able to help in the smallest way possible.”

While the main goal of adding interpretation and captioning to theater performances is to increase accessibility, Reycraft said increasing visibility is just as important.

“It’ll raise awareness of the fact that there’s a population of people who deserve to enjoy the arts,” Reycraft said.

“Certainly it helps the deaf community because they want to be included, and they rarely are. I think for the university as a whole … we’re the flagship university in the state, and for us to have something like this, it reflects well on us. Disability and deafness are civil rights issues, and certainly the university is all about civil rights, diversity and inclusion.”