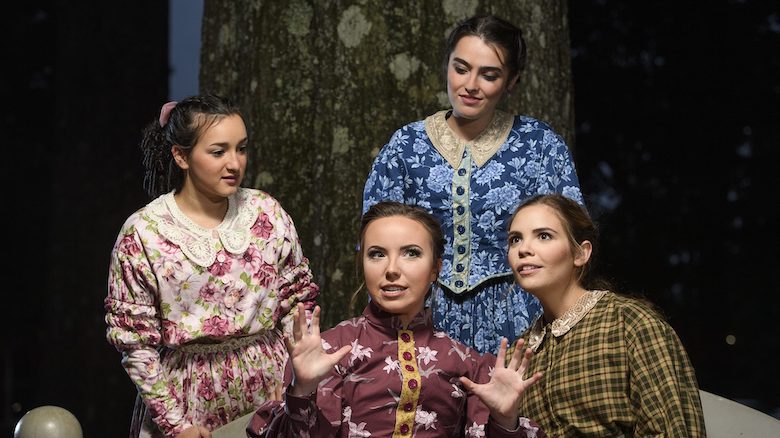 “Christmas will be gory!” is hardly a sentence most people would associate with the Christmas of their finest dreams. Nor do most people expect to hear those words belted by a petite young woman careening around in a corset and hoop skirt.

But Jo March is hardly an ordinary young woman. She’s the most audacious of the four March sisters, the titular “Little Women” of the musical based on the classic Louisa May Alcott novel of the same name.

“Little Women – the Musical,” the second production of Ole Miss Theatre and Film‘s 2019-20 season, opens at 7:30 p.m. Friday (Oct. 25) in the Gertrude C. Ford Center for the Performing Arts. Additional performances will be at 2 and 7:30 p.m. Saturday (Oct. 26) and 2 p.m. Sunday (Oct. 27). A reception in the Ford Center lobby will follow the opening night performance; the Saturday matinee will be ASL-interpreted and have real-time open captioning.

Tickets are $20, with discounts for UM faculty, staff and students, as well as for children and seniors. Tickets are available at the UM Box Office or by contacting 662-915-7411 or umbo@olemiss.edu.

Jo March is determined to defy the societal conventions of Civil War-era New England – by writing swashbuckling stories to be performed by her sisters as holiday entertainment and, ultimately, published in the popular press. She is equally determined not to marry – the only expected happy ending for girls of the day, and the one anticipated for her sisters.

“I’m most excited to be portraying Jo because she is such an icon,” said Lydia Myers, a University of Mississippi senior from Laurel who plans to graduate in May with a bachelor’s degree in theatre arts with an emphasis in musical theatre. “I’m excited to be putting my own twist on Jo and what Jo March means to me.

“A lot of women look up to her and have looked up to her for many years, all around the world … to be playing a character that so many people feel so strongly about is an honor and a privilege.”

For those who are familiar with the story, the musical version has all the plot points of the novel and many screen adaptations, plus two dozen songs, which add another layer of emotion to what is already an emotional, sentimental story. The music also adds a challenge for a group of performers who are wearing corsets and heavy costumes.

“I had no idea how many layers they actually wore,” Myers said. “We’re wearing our undergarments, pantyhose, a corset with a petticoat; and then for me, I’ve got a blouse and skirt, and I never really leave the stage, so everything else I wear is layered on top of that … I will be in three skirts for a dance number.”

It’s true that Ginger Rogers did everything Fred Astaire did but “backwards and in high heels.” But she was usually wearing a diaphanous chiffon gown.

In fact, many portrayals have Jo March in trousers. Holland Downs, a senior costume-design student from Booneville who also holds a bachelor’s degree in fashion design and merchandising from Mississippi State University, is the show’s costume designer, and she made a deliberate decision to the contrary.

“When doing research, I found several productions of ‘Little Women’ that did dress Jo in menswear pants, which was very period-inaccurate and I felt took away from the revealing of the character,” Downs said.

“As the designer, I wanted Jo to show her strength in her character.”

Costumes are a major component of any production, but they’re often thrown into extra focus when the show happens to be a period one. Historical costumes present an extra set of challenges – and these are compounded by the fact that the production is being staged in the Ford Center, which means the looks must be communicated to someone sitting at the far end of a large performance space.

“A lot of the calico and plaid prints needed to be enlarged, along with the color-contrasting trim details, and the garments’ overall silhouettes needed to be exaggerated,” Downs said. “This truly helps the audience to better see the costume details on a large stage and at a distance.”

Micah-Shane Brewer, assistant professor of musical theatre and the show’s director, also took the larger stage and auditorium into account in his directing of the show.

“It’s tricky, because it’s an intimate show; it’s not a big flashy musical,” Brewer said. “So the challenge is making it feel intimate for the entire, huge room.

“Gestures have to resonate; the actors have to commit to the style … you have to stay true to what’s happening in the story, but also make sure we’re not playing to the first three rows.”

Early concept meetings for the show yielded both design and storytelling ideas that may not have been seen in previous stagings of “Little Women,” but they’re better seen in person than read about, Brewer said.

“As we started to talk about the concept of the show and the design of the show, we kept coming back to how important the attic was: it was (Jo’s) place of solace, her place to dream and create and to bond with her sisters,” he said.

One of Jo’s strongest bonds is with younger sister Beth; the two share “middle child” status among the four March sisters. Elizabeth Burrow, a junior in the musical theatre program who plays Beth, said she drew inspiration for her character from her relationship with her own older sister.

“I think you can find – whether it’s a brother or a sister – you can find similarities in the relationships between all of the sisters,” Burrow said.

“Whether it’s Jo and Amy arguing, or Meg and Jo being the older mentors for Beth and Amy, and then just that love and the strong bond that Beth and Jo have. I find a lot of inspiration in the relationship between me and my older sister and how there’s this unbreakable bond that you can never part with for the rest of your life.”

Burrow said she also found inspiration in the character of Beth herself.

“I think what is so poignant about her and her story is that she never once stops to think about herself,” Burrow said.

Myers, too, said that her character, Jo, would have a lasting impact on her.

“I think Jo has made me a better person – a better actor, a better singer, a better performer,” she said. “Every show I’ve done here has been drastically different, and I’ve loved each and every one of them, but I think Jo is going to have the biggest impact on me, just because of her story and what she means to me and to other women.

“I hope there’s a little girl in the audience who says ‘I want to be Jo March.’”

Ultimately, though, it’s the wholesomeness of the show and the timelessness and universality of the story that Brewer feels passionate about bringing to the stage.

“There’s so much – I’m going to sound like Mr. Rogers here – there’s so much negativity and angst and anger in the world right now, and to go to the theater for two-and-a-half hours and see this story about family and the bonds of love we have for each other and finding love in times of struggle … that, to me, is very needed right now,” Brewer said.