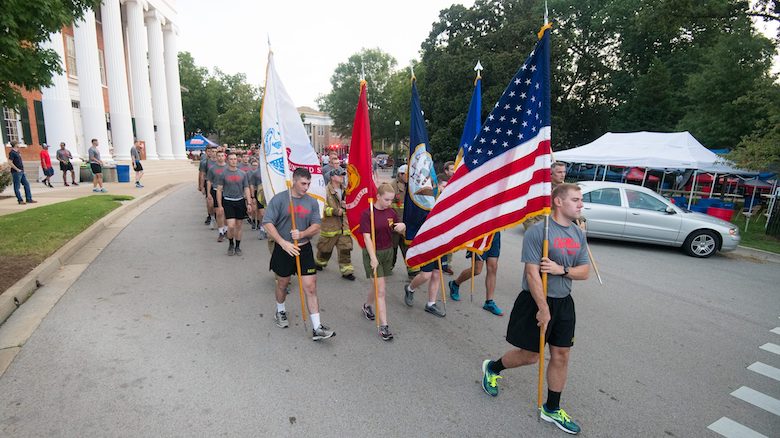 University of Mississippi ROTC cadets begin the 2018 9/11 Run in front of the Lyceum. Cadets will participate in the annual run at 8:46 a.m. Saturday (Sept. 14) to honor the nearly 3,000 victims of the Sept. 11, 2001 terrorist attacks on the United States. Photo by Kevin Bain/Ole Miss Digital Imaging Services

The University of Mississippi‘s ROTC programs will honor the 2,996 victims of the Sept. 11, 2001 terrorist attacks on the World Trade Center and the Pentagon with a memorial run and the solemn sound of chimes at Peddle Bell Tower.

The run will begin Saturday (Sept. 14) at 8:46 a.m., which is the time the attacks began. Runners from the university’s ROTC and supporters will proceed from the Lyceum steps down University Avenue to the Oxford Square. Andrew Newby, UM assistant director of veteran and military services, will deliver opening remarks, and Oxford Mayor Robyn Tannehill will present final remarks at the end of the run.

The event is set for the same day as the Ole Miss-Southeastern Louisiana football game, where first responders and service members from each branch will escort the game ball through the Walk of Champions and present it to Ole Miss football coach Matt Luke at 11 a.m.

U.S. Army Lt. Col. Jonathan H. Lindsley, professor and chair of military science, noted the wide array of people who were affected by the attacks, and the importance of remembering them. He has completed two tours to Afghanistan, two tours to East Africa and one tour to Iraq.

“It will be a time to honor the sacrifices of the service members, first responders, government employees and families who have either made the ultimate sacrifice or lost loved ones safeguarding our nation’s values, beliefs and the American way of life,” Lindsley said.

Terrorists with Al Qaeda took over four commercial airliners on Sep. 11, 2001. Two planes were flown into the World Trade Center, one into the Pentagon and another crashed in field in Pennsylvania between 8:46 a.m. and 10:03 a.m. that day. The events are the deadliest terrorist attack on U.S. soil.

Besides the run, the university will remember the victims on the actual anniversary. Peddle Bell Tower will chime Wednesday morning at the times of the actual attacks on New York and Washington. The ROTC departments will pay their respects with a joint service honor guard at noon in front of the Ole Miss Student Union.

U.S. Army Master Sgt. Kenneth King, senior instructor in military science and leadership, did three tours in Iraq following the 9/11 attacks. He is looking forward to honoring the fallen.

“I have spent my whole career training and deploying to combat the senseless acts committed that day,” King said. “In addition to the lives lost on Sept. 11th, we have lost thousands more servicemen and women in the fight to ensure we are never compromised again.

“This run honors all of them.”

ROTC cadet William Warren, a senior integrated marketing communications major from Memphis, said he is honored to be participating.

“I take 9/11 very seriously,” Warren said. “I feel that people don’t understand the sacrifice that first responders and the military make every day for our country. Remembering 9/11 is a great way for everyone to pause and show respects to the fallen.”