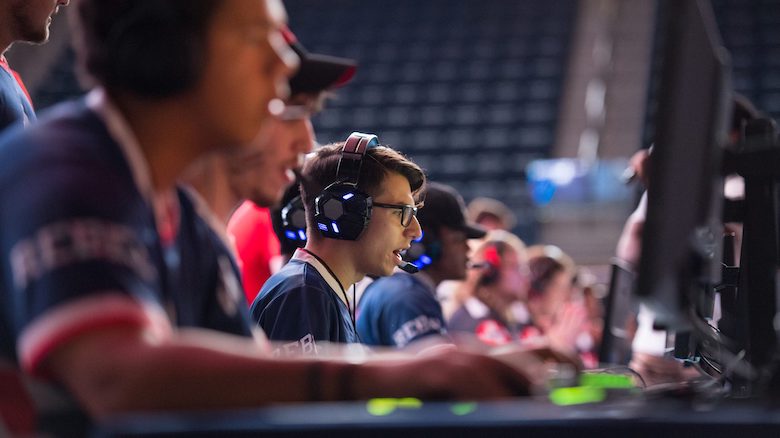 Last year, a single team on the University of Mississippi campus finished No. 1 in the nation.

The players didn’t compete on a field, court or track. No orange, yellow, white or brown balls were involved. But the players did rely on skills sharpened by hours of practice, intense focus and teamwork. Most importantly, they had to shoot straight.

The team was the Ole Miss Esports‘ Call of Duty team, which finished No. 1 in the U.S. and No. 2 in North America in the College Call of Duty League, a competitive video gaming, or esports, league. The team competed in the league’s April tournament featuring 32 teams, including groups from schools such as Ohio State University, the University of South Carolina and Rutgers University, and advanced to the Grand Finals, losing to Humber College of Toronto.

The rapid rise to the top of the College Call of Duty League is a great start for an Ole Miss Esports program that started in January 2017 with five students.

“I am extremely proud of the Call of Duty team and the work they did last year; obviously, it is always nice to be ranked as the best at a game,” said Jimmy Palmer, Ole Miss Esports program coordinator and information technology coordinator in the university’s Center for Manufacturing Excellence. “Those students worked very hard and deserve a great amount of praise for what they accomplished.”

And those 42 players competing in those seven games will converge on the Mississippi State University campus Saturday (Oct. 5) with revenge on their mind for the second annual Esports Egg Bowl between the rival schools. The free event begins at 10 a.m. in MSU’s Humphrey Coliseum and also is viewable online via MSU Esports’ Twitch channel.

“Right now, my biggest focus for the organization is winning the 2019 Esports Egg Bowl,” said Sergio Brack, a senior sociology major from Chicago who is captain of the Call of Duty team. “It is one of the main reasons I decided to accept the role of being head of competitive for the organization. 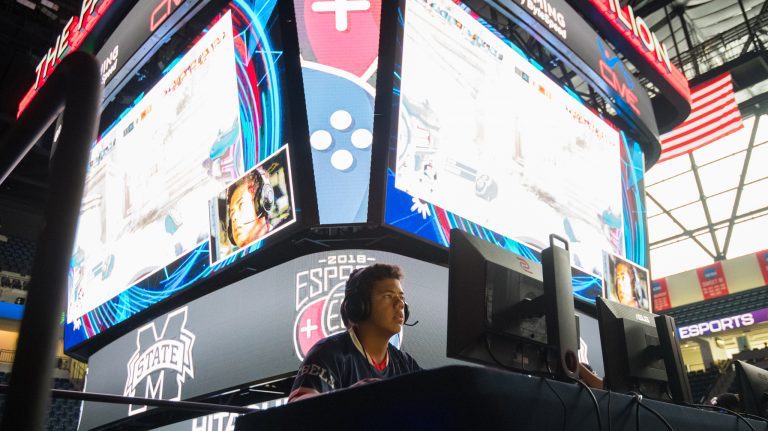 “We made incredible strides last year in making the organization a household name in terms of collegiate esports through our Call of Duty team. I want that same publicity for all of our teams.”

Nationwide, esports is rising to the forefront of the national consciousness. In July, the news exploded that a 16-year-old had won $3 million in the inaugural Fortnite World Cup, held at the U.S.T.A. Billie Jean King National Tennis Center in New York City. The payout was the largest in esports history.

ESPN and other cable outlets cover esports events, and the Mississippi High School Activities Association added esports as a pilot program in 2018-19.

And esports also has become a varsity collegiate sport, with Robert Morris University in Illinois announcing in 2014 a scholarship-sponsored League of Legends team. Ohio State University recently opened an esports arena, as has Boise State University, and the University of California at Irvine debuted the country’s first public college esports arena in 2016.

Ole Miss Esports is young but growing rapidly, with its official Twitter account acquiring new followers daily. With that growth has come excitement.

“Expect to see more competing, more content creation and a more official look for the organization this year,” Brack said. “We also are looking to garner more support from our student body.

“The beauty of esports is that you can support from right from your own home. We want to let students know we exist and that they can support us just as passionately as they do our varsity athletic teams.”

Much like with Ole Miss’ traditional varsity teams, success with the esports team takes hard work and dedication. Members engage in an intense practice schedule, travel to tournaments nationwide – the Office of the Provost funds the majority of the program – and are held to high standards, including maintaining a 2.5 GPA and conducting themselves under a code of conduct.

Tryouts were held in September to finalize the roster, and a signing day event was held Thursday (Oct. 3) to introduce the team. While the program’s roster is capped at 42 students this year, dozens more students participate in the program, scrimmaging with the varsity players and being mentored by them.

And the program plays other games outside of its slate of seven competitive titles, including games such as Fortnite, Street Fighter and Madden NFL, so interested students don’t have to compete on the varsity level to be part of the team. 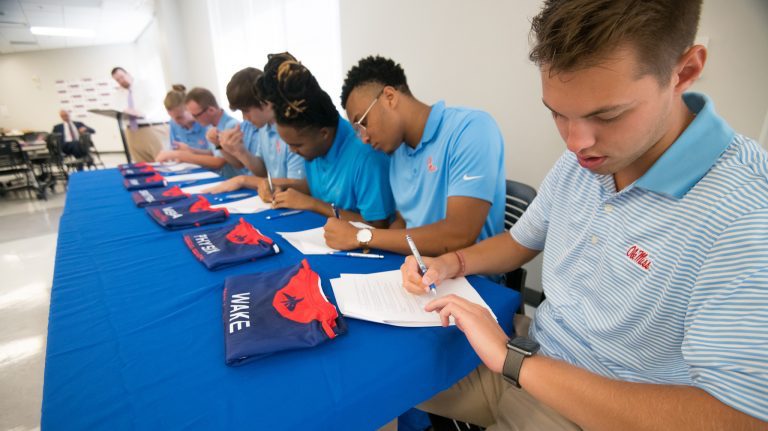 Will ‘Wake’ Primos (right) signs a contract with other members of the Ole Miss Rebels Esports Call of Duty team for the 2019-20 year. Photo by Kevin Bain/Ole Miss Digital Imaging Services

“Even if you have no want to play competitively, we have an extremely large community that doesn’t play competitively,” said Jonah Herrin, a sophomore business management and entrepreneurship major from Batesville who is the program’s president and a varsity Rocket League team member.

“Come to a meeting, join our Discord, reach out on social media, just say hello to anyone and I am sure you will want to experience more.”

It’s that sense of inclusion that has guided the program through its early months.

“Esports has allowed me to find a home at Ole Miss,” said Cray Pennison of Mandeville, Louisiana, a senior majoring in English with a creative writing emphasis and minoring in cinema. The past president of Ole Miss Esports, Pennison founded the team with Gage Angle, a Tupelo High School graduate who grew up in Colorado Springs, Colorado.

“Esports encompasses people from all walks of life; everyone has their own stories of how they got into video gaming and where they plan to go next,” Pennison said. “I get to meet amazing people with big dreams who happen to enjoy playing video games.

“So esports became my home at Ole Miss, and I’m glad to say that it also became the home to several other people on campus.”

“I have always been interested in esports and to finally be able to compete on a team has made my college experience a lot better,” said Stapleton, a member of the Overwatch team. “I’ve made some good friends and hope to make even more on this team.”

Providing an extracurricular activity such as esports boosts student success, and esports and video gaming are a perfect fit for a university, Palmer said. Plus, there are research angles involving esports that UM researchers are exploring.

“Ole Miss is an academic and research institution where esports will provide many opportunities,” he said. “Video games by themselves are a true multidisciplinary field that includes computer science, art, music, creative writing, business, psychology and more.

“When you make a video game into an esport, the number of fields expand into sport and exercise sciences, telecommunications, journalism, media and more.”

Ole Miss Esports will compete at tournaments around the country throughout the year, but up first is this weekend’s Esports Egg Bowl. With support from the university, including its Department of Computer and Information Science, which helped launch the program, the first-ever Esport Egg Bowl was organized last year.

While the outcome wasn’t as expected, a new, electronic rivalry was born.

“I think that in the future we will see this event grow into a major in-state event and that other universities will replicate what we have started.”