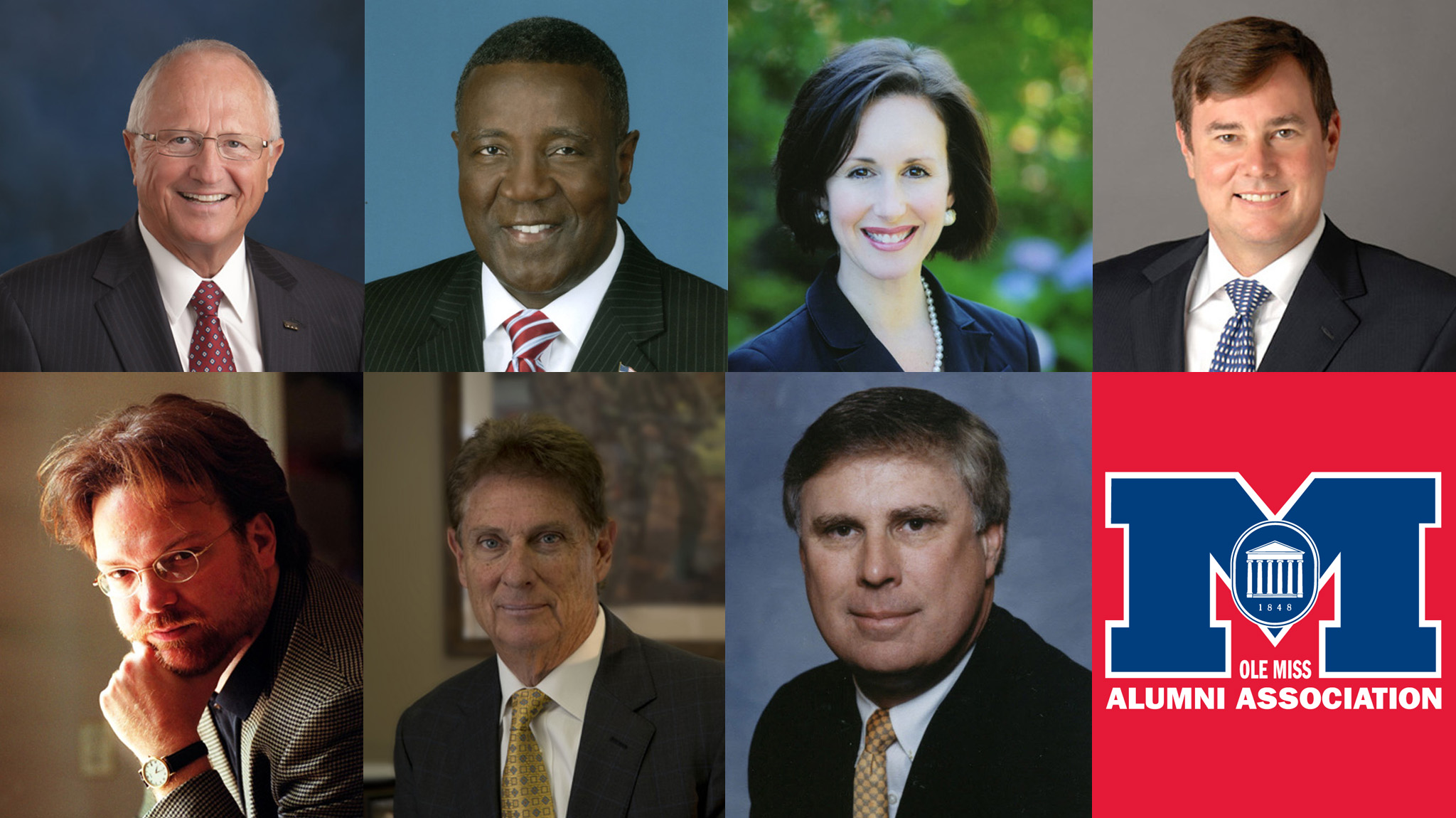 The University of Mississippi’s Alumni Association will award seven recipients with its highest annual honors as part of Homecoming 2012, set for Oct. 13.

Created in 1974, the Hall of Fame honors those select alumni who have made an outstanding contribution to their country, state or the University of Mississippi through good deeds, services or contributions that have perpetuated the good name of Ole Miss.

George Lotterhos (BBA 71) of Germantown, Tenn., will receive the Alumni Service Award for service to the university and the Alumni Association over an extended period. Jillian Foster (BSPh 02, PharmD 04, MBA 08) of Oxford will receive the Outstanding Young Alumni Award, which recognizes alumni who have shown exemplary leadership throughout their first 15 years of alumni status in both their careers and dedication to Ole Miss.

The Alumni Association will host a reception for the honorees on at 6 p.m. Oct. 12 at The Inn at Ole Miss. A dinner for the award recipients will follow the reception.

Colbert is chairman of Community Bancshares of Mississippi Inc., a multibank holding company with locations in Mississippi, Alabama, Tennessee and Florida. He received a bachelor’s degree with a major in banking and finance from UM in 1962 and graduated from the Graduate School of Banking of the South at Louisiana State University in 1966.

In 1968, he accepted the position of chief executive officer of Farmers and Merchants Bank in Forest, making him the first graduate under the direction of the then recently-formed Chair of Banking at Ole Miss to become CEO of a bank.

Colbert was inducted into the Mississippi Business Hall of Fame in 2005.

Donald is former chairman of the Georgia Board of Pardons and Paroles. He earned the Bronze Star for his bold leadership as a task force commander with the 101st Airborne “Screaming Eagles” during Gulf War I. He achieved strategic successes as deputy commanding general for the U.S. Army Pacific and two tours of duty in the Pentagon. He was appointed commissioner of corrections in December 2003.

Donald is a Jackson native and a 1970 graduate of Ole Miss with a bachelor’s degree in political science and history. He earned his master’s degree in public administration from the University of Missouri.

Fry is one of seven managing directors who lead American Securities, a New York-based private equity firm, and he heads the AS Resources Group, which works with CEOs to grow the 22 portfolio companies and their roughly 20,000 associates.

After graduation from UM, Fry was commissioned into the Navy. He left the Navy as a lieutenant in 1988 to attend the Harvard Business School. Upon graduation, he joined The Dixie Group and was named president in 1995. There, Fry helped lead the transformation from a raw material textile business to a large and growing carpet business by 2000.

Fry left The Dixie Group in 2000 and became the CEO of Bell Sports. Bell merged with Riddell Sports, the largest maker of football helmets, in 2004, and Fry was named CEO of Bell-Riddell. The company merged in 2006 with Easton Sports, where Fry served as president.

In 2007, Fry was chosen to be the first non-family CEO at Oreck Corp., selling vacuum cleaners and air purifiers into the direct-to-consumer, franchise and large retail channels. In 2010, he was named a managing director for American Securities.

Iles is a writer and musician from Natchez. Iles was born in 1960 in Germany, where his father ran the U.S. Embassy Medical Clinic during the height of the Cold War. He spent his youth in Natchez and graduated in 1983 from Ole Miss, ehere he was a member of Phi Kappa Psi fraternity.

After several years playing in the band Frankly Scarlet, he wrote his first novel in 1993. A thriller about Nazi war criminal Rudolf Hess, “Spandau Phoenix” became the first of Iles’ 13 New York Times bestsellers. His novels have been made into films, translated into more than 20 languages and published in more than 35 countries worldwide.

Jordan is the creator of the Realtree and Advantage brands of camouflage and the host of the “Monster Bucks” video series and the “Realtree Outdoors” television show.

While at Ole Miss, Jordan played football on two bowl teams and started several games despite a nagging hamstring injury that sidelined him several times throughout his college career.

He started his first company, Spartan Archery Products, in 1983 and dreamed of creating products that hunters deem necessary in the woods. From the first pattern of bark, which was literally traced from an old oak that still stands in his parents’ yard, to Jordan’s latest pattern, Realtree AP, innovation has been and always will be the key to Realtree’s success, he said.

After a few false starts and some trying times in the late 1980s, Realtree grew quickly throughout the 1990s, becoming a household name in the hunting industry. Jordan has never stopped innovating, creating camo designs using sophisticated computers, digital cameras and photo-realistic printing. Jordan continues to oversee the entire process of creating and launching each new camouflage pattern.

Lotterhos is a 1971 graduate of the UM School of Business. While at Ole Miss, he was a member of the football team for 4 years as a defensive end and a member of Pi Kappa Alpha fraternity.

Upon graduation, he entered the financial world and is managing director at Raymond James/Morgan Keegan. Lotterhos is the recipient of the 2008 M-Club Alumni Chapter Service Award. Based on leadership, service and commitment to the M-Club, the award was also then named after him that same year.

Foster is director of pharmacy at Baptist Memorial Hospital-North Mississippi in Oxford. She is a student preceptor and leads a team of 38 employees in maintaining quality care for patients. She recently received one of 16 national grants to establish a pharmacy residency training program.

Foster graduated from the UM School of Pharmacy with a Doctor of Pharmacy in 2004 and completed the university’s MBA program in 2008.

She has been named both MSHP’s and MPhA’s Outstanding Young Pharmacist of the Year. Foster is president of the Ole Miss Pharmacy Alumni Chapter and is a member of the Oxford Rotary Club, the Delta Gamma Alumnae Chapter and a volunteer at the Oxford Medical Ministries Clinic.