NSF Fellowships Give Students Means to Aim Big with Their Research 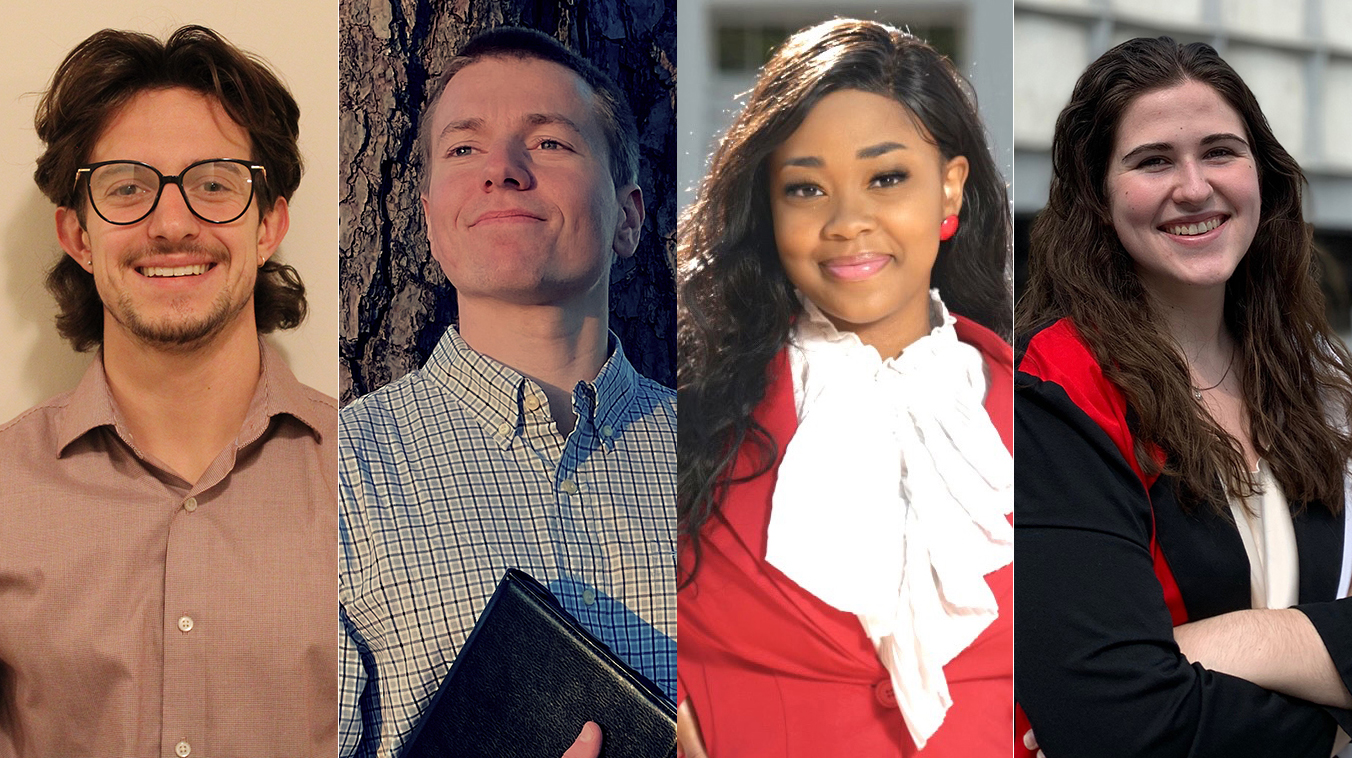 MyKayla Williamson, a senior anthropology major; Austin Wallace, a senior chemistry major; and Benjamin Savino, a graduate student pursuing a Ph.D. in engineering science, are the three students. Athena Flint, a graduate student in chemistry, also received an honorable mention, considered a significant national academic achievement, for her application to the program.

The students learned of the recognition in April.

“That UM had students successfully compete for and receive these fellowships elevates us as an institution,” said Annette Kluck, dean of the Graduate School and coordinating official for NSF GRFP fellowships that come through the university. “We are especially excited to have one student (Savino) remain with us to complete the doctoral degree.”

The GRF program is highly competitive, with about 14,000 applicants for 2,000 awards, said Josh Gladden, UM vice chancellor for research and sponsored programs.

“The university is thrilled that three of our outstanding students have received National Science Foundation Graduate Research Fellowships and one outstanding student has received an honorable mention,” Gladden said. “Students form the backbone of the research mission at any research institution, and this recognition and support from NSF speaks well of the quality of our students.”

Vivian Ibrahim, director of the UM Office of National Scholarship Advisement and associate professor of history, echoed that excitement for the recipients.

“This is an incredible showing,” Ibrahim said. “It’s their hard work that got them here. And I congratulate them. 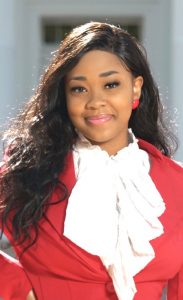 MyKayla Williamson, of Waynesboro, has been awarded an NSF Graduate Research Fellowship Program award to conduct research in historical and African diaspora archaeology. A recent graduate of the university’s Sally McDonnell Barksdale Honors College, she plans to pursue a master’s in archaeology at Cornell University. Submitted photo

“For the NSF GRFP, what they’re looking for is to fund independent, motivated students who want to propel scientific knowledge. … What’s interesting about the NSF GRFP, in particular, is they’re not just funding for science, they’re also funding people who have long-term sustainable interests, helping their community and beyond.”

Williamson, of Waynesboro, graduated this month with a bachelor’s degree in anthropology and minors in journalism and classics, and plans to use the fellowship to pursue a master’s in archaeology at Cornell University. The Sally McDonnell Barksdale Honors College student is believed to be the first Black female student from Ole Miss to win the fellowship.

She said she looked forward to the feedback she would gain from her application as an undergraduate and felt it would strengthen her odds of success when applying as a graduate student so the email message from NSF came as a surreal surprise.

“The congratulations from the NSF hit me heavier than anything,” Williamson said. “I was moved to tears. I wanted a chance to do better in a future application, and I ended up earning the award.”

Williamson said her participation in the Ronald E. McNair Postbaccalaureate Achievement Program was the reason she had a completed research project before starting her senior year. She plans to do research in historical and African diaspora archaeology.

“I want to understand better the lived experience of those overlooked in historical records, like the enslaved,” she said, adding that her interest in the subject partly stems from her experience as a Black woman attending predominantly white institutions.

As evidenced by the fellowship, Williamson shows promise as a young scholar, said Carolyn Freiwald, UM associate professor of anthropology.

“She is using her voice to speak for people who were not allowed to tell their own stories,” Freiwald said. “We have looked at history through the lens of anthropology – and archaeology – in the Behind the Big House program since 2013.

“MyKayla’s work, looking at the lives of enslaved women, tells us not only about the lives of Mississippi residents in the past, but about race and gender inequalities that are still issues today.” 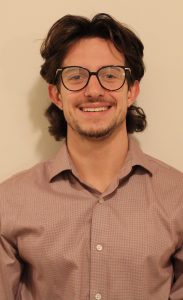 He is also a member of the track and field and cross-country teams at Ole Miss, is a finalist for the NCAA’s Walter Byers Postgraduate Scholarship and is one of two students from Ole Miss who received the Brad Davis Southeastern Conference Community Service Award for 2021-22.

“My reaction was first of excitement but quickly became gratitude for all of the support and guidance that I have received in efforts to help me achieve my goals,” said Savino about receiving news of the NSF fellowship.

“Dr. (Wen) Wu (assistant professor of mechanical engineering) has provided tremendous support not only in research but in my development as a whole. He has emphasized from day one that he is using his expertise in our research field to foster my career development and help me reach my goals. I cannot express my gratitude enough for his selflessness and continued support of my growth as an engineer and researcher.”

“I plan to research how flexible structures interact with turbulent fluid flow in the hopes of developing flight control structures (flexible wings) which improve flight efficiency.”

Savino said planes and rockets have fascinated him for as long as he can remember, and he studied mechanical engineering to one day work on planes.

“My research is an opportunity to learn the fundamentals of fluid mechanics and aerodynamics while using cutting-edge technologies in the field, and I believe it has the potential to change modern day air travel for the better. This is what inspired me to pursue this research.”

Long term, he said he aims to be a leader in the aerospace industry.

“Ultimately, I am aiming to become an astronaut and have the opportunity to be among the first on Mars, as I believe this accomplishment can and will happen in our lifetimes.”

Wu said he believes the fellowship will allow Ben to follow his intellectual curiosity and passion to pursue research that matters in the world.

“I have full confidence that he will be very successful in his graduate education and beyond,” he said. “Moreover, his success also reflects the sustained excellence of our undergraduate and graduate programs and our students.” 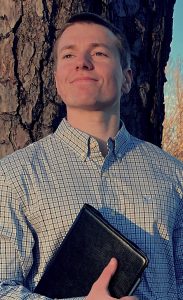 Austin Wallace, a 2021 Goldwater Scholar at the University of Mississippi, has been using quantum chemistry to study amorphous solids, or solids that exhibit randomization in their structure. The Southaven native and recent UM graduate plans to use his NSF graduate research award to pursue a doctorate in computational chemistry at the Georgia Institute of Technology. Submitted photo

Wallace, of Southaven, graduated this month with a bachelor’s degree in chemistry with a biochemistry emphasis. A Sally McDonnell Barksdale Honors College student, he also received a Goldwater Scholarship in 2021, one of the most prestigious national scholarships in natural sciences, engineering and mathematics.

With the NSF fellowship, Wallace plans to pursue a doctorate in computational chemistry at the Georgia Institute of Technology.

“I enjoy computational chemistry research due to the seemingly infinite possibilities of molecules I can model to investigate useful and relevant characteristics for increasing our understanding of reality and discovering useful compounds for applications, such as dyes for renewable energy,” he said.

“These types of solids are not uniform; rather, they exhibit randomization in their structure,” he said. “I have written a codebase that generates these structures, manages quantum chemical calculations and pulls the data together to build spectra by using a Boltzmann distribution, a measure that gives the probability that a system will be in a certain state as a function of that state’s energy and the temperature of the system.”

Wallace said the Ole Miss Chemistry Summer Research Program, operated by Nathan Hammer, professor of chemistry and biochemistry, and supported through the NSF Research Experiences for Undergraduates, was important to him.

“This program provided financial support and friends over the summers to make immense progress on my research projects and to develop my skills as a researcher,” he said.

“Our department has long valued research, with undergraduate research being a cornerstone of that,” said Ryan Fortenberry, UM associate professor of chemistry and Wallace’s research adviser. “We have students who come to Ole Miss because we allow them to start research as soon as they begin.

“Austin started research with me in the first semester of his freshman year and hasn’t stopped. I was fortunate to be able to provide him with the tools and scaffolding for his natural curiosity and dedication to shine through. His honors thesis is above many dissertations that I have read, and this stems from his desire to make this research his own.” 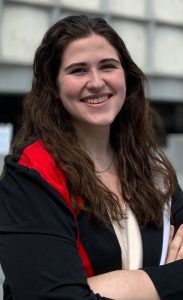 Flint, from Mulkeytown, Illinois, is a first-year graduate student at UM, earning a doctorate in chemistry. She first arrived at Ole Miss in summer 2019 as an NSF Research Experiences for Undergraduates scholar from Yale University and returned to the university to continue working with her adviser, Fortenberry.

“She enjoyed the research process and the astrochemical applications for our computational chemistry,” Fortenberry said. “She was able to bridge her two favorite subjects of chemistry and astrophysics together in order to find a niche that few undergraduate students know exists.”

“(Dr. Fortenberry) has been a great mentor to me, not just professionally but also personally,” Flint said. “He took me into his research group after I cold-emailed him in the spring of 2019 as a discouraged sophomore who had been declared as a chemistry major for a while but was not drawn to any of the research I had been exposed to at that point.

“I met with him to discuss projects, and while the space part was interesting, the computational chemistry part was terrifying for a student that hadn’t even taken physical chemistry yet. Through the summer of the REU and afterwards, Dr. Fortenberry helped me to grow as a student and gave me the foundations to further develop my research interests more independently.”

Flint studies the formation of small organic molecules in the low-temperature, low-pressure environments of interstellar space.

“A large part of what I do lies within the realm of predictive astrochemistry, where given the current molecular inventory of a region of space, I look at how those molecules interact chemically and find new candidates to expand that inventory,” she said.

“I’m also interested in reexamining other established astrochemical reactions and how their chemistry changes when examined in the context of an interstellar environment. I hope that my work leads to the eventual detection of some new molecules in space, and allows for a more complete understanding of a kind of chemistry that can’t really be observed in a laboratory setting.”